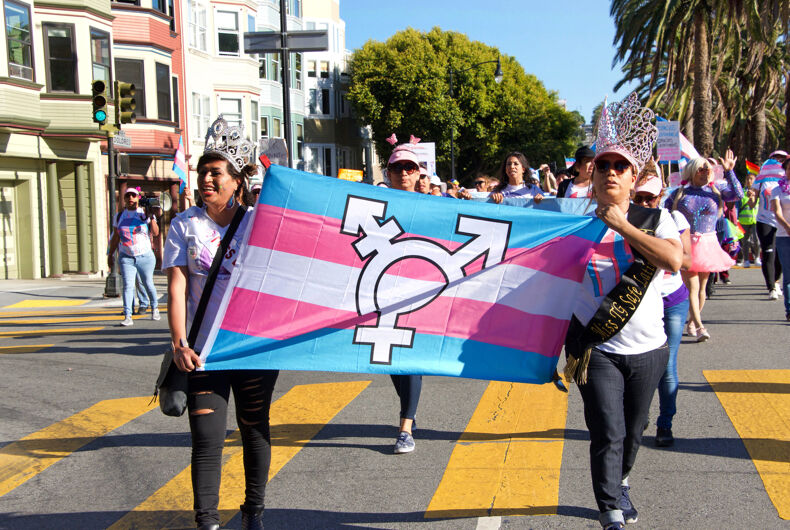 Related: The very first rainbow Pride flags were thought to be gone. Until now.

“San Francisco has been and always will be a place where everyone can seek refuge, sanctuary, and safety,” she added. “Today, we celebrate both our city’s pride and the transgender community.”

San Francisco is home to many historical events that changed the world for LGBTQ people, like the Compton Cafeteria Riots which became the first officially recognized transgender rights demonstration in America with the designation.

For the first time in our country, today we declared the month of August, Transgender History Month in San Francisco.

Our transgender community that has been a beacon of resilience and strength. This month we will reflect and celebrate the progress we’ve made. pic.twitter.com/G0RpLmdMNj

The Compton’s Cafeteria Riot is one of the best-known LGBTQ rights demonstrations to take place pre-Stonewall.

The Tenderloin location, the chair of a chain of Compton’s Cafeteria restaurants, was in operation from the 1940 to the 1970s. It became a popular hangout for trans people until Cafeteria personnel, fearing the loss of more profitable clientele, would call the San Francisco Police to clear the place out.

On an August night in 1966, when the police attempted to arrest a trans patron, she responded by throwing her coffee in the officer’s face. This touched off a riot, with approximately 60 people pushing back against the police that night. A picket against Compton’s took place the following night.

Now, the area is formally known as Compton’s Transgender Cultural District, declared by the San Francisco City Council in June 2017 to preserve and honor the history of the trans community in the Tenderloin.

Mayor Breed’s office says that the Riots are “one of the first LGBTQ uprisings in United States history, preceding the better known 1969 Stonewall riots in New York City.”

Many other actions towards LGBTQ rights were recorded in the pre-Stonewall era, from a riot at Cooper Do-nuts in Los Angeles in 1959, a sit-in at Dewey’s lunch counter in Philadelphia in 1965, and a picket of the Chicago newspapers in 1966 for refusing to sell ad space to Mattachine Midwest, an early gay rights organization.

“As we have proven, we are capable of transcending what is imposed on us, to attain lives in which we are authentically and exquisitely us,” Jupiter Peraza, director of Social Justice and Empowerment Initiatives for the city’s Transgender District, said at the ceremony. She drafted the proposal that became the official proclamation in just under two months.

“We are our own most prized possessions,” Peraza added.

“Transgender History Month is so iconic!” Aria Sa’id, co-founder and President of the Transgender District, said in a statement. “I don’t think the broader public realizes how many significant contributions to history, culture, social justice, and of course, popular culture that transgender and gender non-conforming people have made. On behalf of The Transgender District, we are overjoyed to celebrate this incredible milestone.”

Thank you for your leadership, Mayor @londonbreed. https://t.co/9B4HIHb4KI