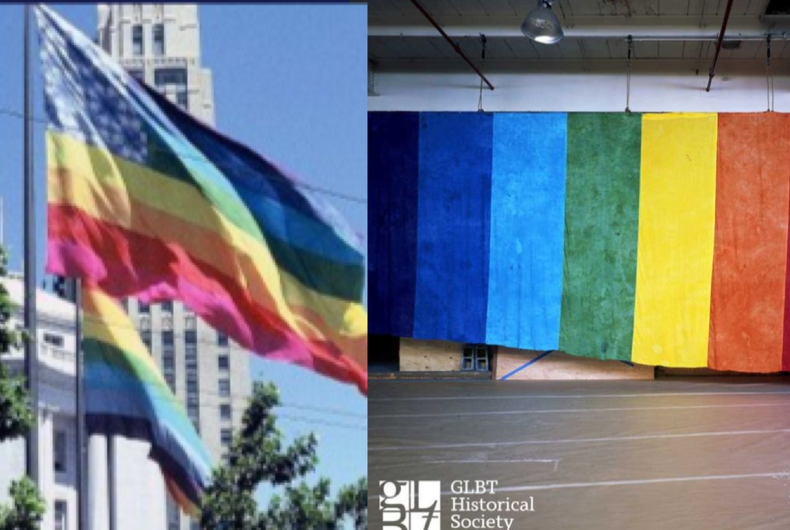 One part of the two original Pride flags created for the 1978 Gay Freedom Day Parade (left) has been recovered. It is now on display at the GLBT History Society Museum in San Francisco (right).Photo: LGBTQ Nation Composite/Wikimedia/Screenshot

One of the “original” and most adopted rainbow Pride flags, created by Gilbert Baker, was first designed and put together by volunteers in 1978. They fabricated two large 3o-by-60 feet flags that flew over the United Nations Plaza in San Francisco for the Gay Freedom Day Parade.

After being taken down, one was misplaced and another was stolen, so both were considered lost despite being adopted as the first widespread Pride flag around the world. Now, the flag has been recovered and authenticated as one of those two original banners.

Related: The U.S. embassy at the Vatican is flying the Pride flag & the right is flipping out

The unique piece of history was unveiled on June 4 at the GLBT Historical Society Museum and Archives, when the museum opened for the first time since closing during the COVID-19 pandemic. The museum took possession of the flag in collaboration with the Gilbert Baker Foundation.

“For LGBTQ people, there are few artifacts that carry the historic, political, and cultural significance of this seminal work of art, the original rainbow flag. We are deeply grateful that Gilbert Baker saved this fragment, and that it has been brought home to San Francisco,” said Charley Beal, president of the Gilbert Baker Foundation, and Terry Beswick, executive director of the GLBT Historical Society, in a joint statement.

“We trust that its message of diversity, liberation and hope will continue to inspire queer people for generations to come.”

The two initial designs included one with a more typical rainbow design, and one with a field of stars akin to the American flag.  “I thought of the American flag with its thirteen stripes and thirteen stars, the colonies breaking away from England to form the United States,” Baker wrote in an unpublished memoir, according to his website.

“I thought of the vertical red, white, and blue tricolor from the French Revolution and how both flags owed their beginnings to a riot, a rebellion, or revolution. I thought a gay nation should have a flag too, to proclaim its own idea of power.”

Baker, who passed away in 2017 at the age of 65, had come to San Francisco for training as a member of the United States Army. Joining in the late 1960s/1970s counterculture and queer community there, Baker completed his service as a medic. “At the suggestion of friends and colleagues, including San Francisco supervisor Harvey Milk,” Baker would create the symbol that would replace the pink triangle that LGBTQ people had adopted as signage for their cause.

Baker, though, didn’t claim sole credit in designing the flag. “A true flag is not something you can really design. A true flag is torn from the soul of the people. A flag is something that everyone owns and that’s why they work,” he once said.

Baker, working with James McNamara, Lynn Segerblom, and some 30 volunteers, dyed and sewed the fabric for a pair of flags to adorn the flagpoles at the UN Plaza in San Francisco’s Civic Center. They flew for a day over the legendary complex before coming down. The one with stars was then put on display at a defunct LGBTQ center before being presumed stolen and lost.

Baker held onto the other one, with just the stripes, but found that it was heavily damaged a year later. According to Beal, Baker had scrapped some of it, but salvaged a majority of it and stored it. The flag was uncovered amongst Baker’s possessions that passed on to his sister, Ardonna Cook, who did not know it was one of the first rainbow flags ever.

When the Foundation asked to use one of Baker’s flags in 2019, Cook mailed it to them from Texas to New York City. They waved it during the Pride celebrations, marking the 50th Anniversary of the Stonewall Rebellion, also not knowing it was an original piece.

“I actually saw a picture that showed a placard saying it was a replica,” Beswick said.

Beal then kept it in his home until he received a call from James Ferrigan, who worked with Baker, who was searching for the flags. The two had the flag authenticated in February 2020 by a vexillologist — a flag expert.

“The remnant we have now, it’s about 28 feet along the hoist and 10 to 12 feet of the fly – still quite large and beautiful,” Beswick reported.

The GLBT Historical Society has added to their feature exhibition, “Performance, Protest & Politics: The Art of Gilbert Baker,” which they originally installed in late 2019 and is still on display now that they have reopened.

The flag initially had a total of eight stripes, each one symbolizing an aspect of the movement. These included hot pink for sex, red for life, orange for healing, yellow for sunlight, green for nature, turquoise for magic and art, indigo for serenity, and violet for spirit.

When the now-defunct Paramount Flag Company — a long time employer of Baker — would begin mass producing the flag, hot pink was not a standard fabric they had on hand. It was dropped, as was turquoise, to keep the design symmetrical.

When Dianne Feinstein became mayor following the assassination of Mayor George Moscone — and Baker’s friend, Supervisor Milk — she would hire Baker to make memorabilia for the city. He would continue creating Pride flags, as well as flags and banners for the Super Bowl, Democratic National Convention, and other prestigious events.

Current San Francisco Mayor London Breed (D) and out state Sen. Scott Weiner (D) were on hand for the reopening, unveiling the flag to the public for the first time in two years, and over 40 years prior to that.

Editor’s Note: This story previously read that the Pride flags had flown for a year, not just one day. We regret the error.

Today I attended the ceremony at the the @GLBTHistory welcoming the original Pride flag back to San Francisco with the assistance of Charley Beal of the Gilbert Baker Foundation. This is the first Pride flag made by Gilbert Baker and it's now back home where it belongs. pic.twitter.com/b7EBA1Unrh

Today we celebrated the reopening of the GLBT History Museum in the Castro. Another great step as we recover from the pandemic. pic.twitter.com/rH6R4okLPi

“This is absolutely beautiful. I have a hand sewn rainbow flag,” @LondonBreed taking a look at the original 🌈 🏳️‍🌈 @GLBTHistory @KQEDnews pic.twitter.com/PVkoXWlZC2

“When I picked it up in New York I packed it in a lavender suitcase. I would not check it. My best friends and I opened it. I wanted to show them history.”

— Terry Beswick at today's unveiling of the rainbow flag at @GLBTHistory