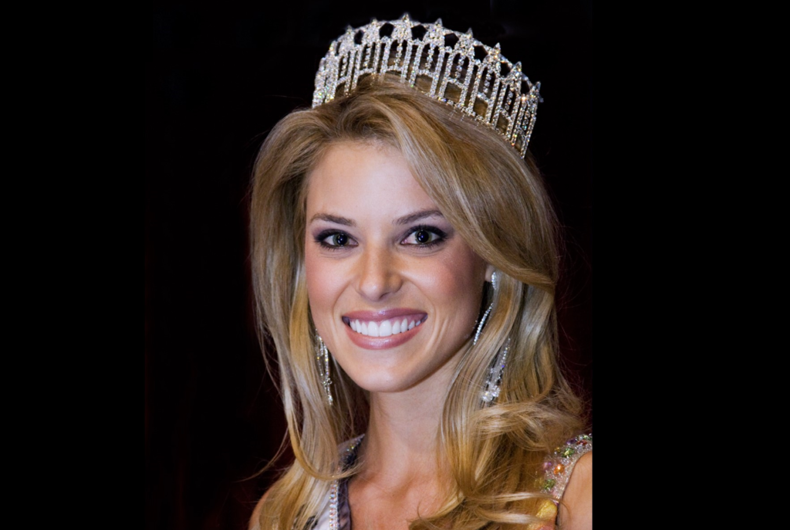 Carrie Prejean Boller – Miss California 2009 who became a martyr for Christian conservatives when she said she believed “that marriage should be between a man and a woman, no offense to anybody out there” at the Miss USA pageant – went on an anti-mask rant at a school board meeting this weekend and threatened to “make sure that none of you [board members] ever serve in a public space ever again!”

“We are going to be unmasking our children today,” she said. “We are declaring our freedom, tonight. We do not consent to the lies, fear-mongering, and abuse – you all know it’s abuse.”

Related: Gay man goes on anti-mask rant in discount store before exposing himself to employees

Then known as Carrie Prejean (before her marriage to former NFL quarterback Kyle Boller), Boller was asked by pageant judge Perez Hilton if she supported legalizing marriage equality.

Like almost every other contestant, she lost the pageant, but she insisted that she lost it because she was silenced for telling “the truth.”

“I knew if I told the truth, I would lose all that I was competing for: the crown, the luxury apartment in New York City, the large salary—everything that went with the Miss USA title,” she said in a later interview.

Footage from the pageant was used in ads by the National Organization for Marriage (NOM) to show that legalizing marriage equality would lead to Christians being silenced. She released memoirs later in 2009 entitled Still Standing: The Untold Story of My Fight Against Gossip, Hate, and Political Attacks where she denounced the “vindictive smear campaign” to keep her out of the public eye. She sued the Miss California USA pageant for religious discrimination and settled her case, and then she threatened to walk out of an interview with Larry King when he asked her about the settlement.

Now, 12 years after Boller was completely silenced for the rest of her life by Perez Hilton, she donned a “MAMA” T-shirt and told the Encinitas, California School Board that anti-maskers like her are “done asking you for permission. The pandemic is over.”

“This is tyrannical leadership, poor leadership, and none of you are willing to stand up for our children,” she said.

“I would love to run for school board to replace all of you. So I’m going to promise you tonight that I will campaign against you, I will I will fundraise against you, and I will make sure that none of you ever serve in a public space ever again.”

Woman wearing a “MAMA” tshirt at the Encinitas school board meeting says her “cubs” will refuse to wear masks this week. “We’re done asking you for permission. The pandemic is over. We are declaring our freedom.”Then she says she and her friends are running for school board. pic.twitter.com/Q5yoLqvLwP

Boller’s Instagram account shows that she is committed to a variety of far-right causes and conspiracy theories. She believes that Donald Trump won the 2020 elections, she opposes the COVID-19 vaccines, and, as several recent posts show, she is still thinking about how she didn’t win that pageant in 2009.