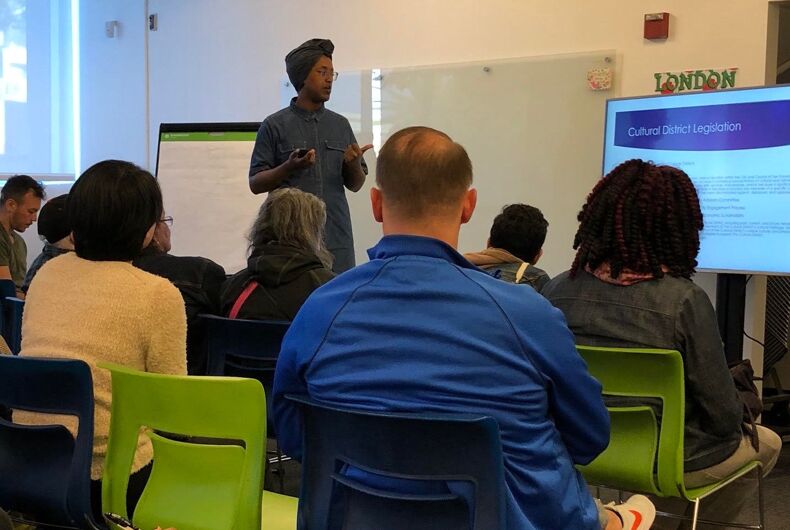 It’s been a little over a year since San Francisco designated the nation’s first transgender cultural district in the city’s Tenderloin neighborhood. But efforts to establish the historical area have been delayed by a longer-than-expected community planning process.

Organizers and co-founders behind the district say the lag is largely due to financial constraints, the time it takes to collect community feedback, and finding consensus among all parties involved.

“The funding, resources, solidifying collaboration with community members and with developers who want to support the district, getting a community space, all those things have taken a lot longer than anticipated,” said Aria Sa’id, former program manager at St. James Infirmary, one of the initial groups involved in the district’s creation. Sa’id, a trans woman, now works for the city’s Human Rights Commission.

The resolution that created Compton’s Transgender Cultural District, as it’s formally known, was introduced by District 6 Supervisor Jane Kim and passed in June 2017. Its purpose is to preserve and honor the history of the trans community in the Tenderloin.

The cultural district spans six blocks of the lower Tenderloin, which encompasses parts of the Sixth Street Corridor and Market Street. The city has recognized four other protected cultural districts: Japantown Cultural Heritage District established in 2013, the Calle 24 Latino Cultural and SOMA Pilipinas districts instituted in 2014, and the Leather and LGBTQ Cultural District formally recognized in May. The city is working on a sixth, focused on LGBT heritage, in the Castro.

Leaders of various LGBT organizations that helped found the district have established the Cultural District Coalition. The group has been gathering ideas from community members and floating ideas of what they’d like to see in terms of implementation.

Honey Mahogany, a black trans woman, has been heading the implementation process of the district in consultation with TGI Justice Project for the past year. She has held numerous public meetings to collect feedback and ideas for the district, negotiated with housing developers to ensure the transgender district is included in their plans, and is currently working on securing funding.

“We’ve had a lot of community meetings and talks that center around establishing priorities for the district and working on a strategic plan, getting community input as to what’s important to them – what they’d like to see,” Mahogany, 34, said in a recent interview with the Bay Area Reporter.

Her number one priority in the next few weeks is submitting a proposal for a $100,000 grant that the Mayor’s Office of Housing and Community Development dedicated for the implementation of the cultural district. If awarded, the money would be distributed in October.

Next on Mahogany’s list is decorating the district with murals, flags, and plaques.

Last year, TGI Justice Project was awarded $125,000, also from the Mayor’s Office of Housing and Community Development, for place making. The money has not been spent yet, however, because Mahogany wants to ensure the community has full input on the matter and that takes time, she said. The money will rollover for use in the next fiscal year.

The ideas for the district range from ensuring equal employment opportunities for trans individuals to establishing a community center. But the biggest concern Mahogany has heard is the need for additional affordable housing.

“Finding affordable housing that feels safe to our community is really important,” Mahogany said. “It’s the number one issue for the community. The vast turnover of affordable units into luxury condos and market-rate units has resulted in the eradication of housing specifically for the most vulnerable, low-income population.”

She said during the community gatherings, people have expressed a desire for more single-room-occupancy units, rental subsidies, and low-income housing. Sa’id added that those involved in the implementation process, although in its infancy stage, are “working on finding property and rental subsidies. It’s one of their biggest priorities.”

Recently, Mahogany worked with developer Star City, which hopes to receive its final building permit in about a month to begin construction at an existing building at 229 Ellis Street. Mohammed Sakrani, product officer at Star City, said supporting the cultural district is important to the urban development company.

“We know it’s important to maintain the diversity of the Tenderloin and have it continue to be a place for the trans community to repair itself and build up a voice,” Sakrani said.

The 55-unit residential space will hire three full-time employees from the trans community who will undergo job training. The positions will be in building operations, resident experience, and maintenance.

Star City will also offer free rent to a trans business owner for the only retail space located on the ground floor of the building. An LGBT-oriented display will also reside in the ground floor lobby to honor and inform the public about the transgender history of the Tenderloin. Sakrani plans to commission a trans artist for any artwork included in it.

Lastly, the developer will donate $80,000 to the coalition for the implementation of the district once building permits are approved. The building will offer group housing with units that have private bathrooms and bedrooms, but shared kitchen and common spaces. Rents are expected to start at $1,700.

The creation of affordable housing is just one of many priorities for the implementation of the district. Johnson, a 54-year-old black trans woman, said TGI Justice Project is currently looking for a new, larger location in the district that would also serve as a community center for trans folks.

The agency is looking for a space with at least 3,500 square feet, half of which would be dedicated to the community center to serve as a safe space for trans people to gather, connect to resources, and hold events. The location would also offer all the programs of TGI Justice Project, a nonprofit that works to end human rights abuses against transgender women of color, in and outside of prison.

The re-emergence of trans nightlife is also something Johnson would like to see for the district.

“My broader vision, overall, for the district is for it to be filled with art, street vendors, see people doing music, create gardens and bring in a lot of positive affirmations and images of the trans community,” Johnson said.

Another top focus among the Compton’s district supporters is developing economic opportunities for trans folks to help prevent the further displacement of the community from the Tenderloin.

“We want to give trans women of color access and opportunity to any job within the district,” said Johnson, adding that the community center would offer job-training programs.

Mahogany wants to see a “diverse economic” environment created to empower trans people, which includes an increase in trans-owned businesses. Sa’id would like to see trans artists commissioned for public art projects in the area.

At the community meetings, people have expressed other ideas, Sa’id said, such as trans-owned hair salons, coffee shops, and cannabis stores.

The Birth of the Cultural District

The resolution that designated Compton’s Transgender Cultural District describes various historical events that involve the trans community, specifically the Compton’s Cafeteria riots that took place in August 1966, which the district is named after.

The riots happened at Gene Compton’s Cafeteria, a 24-hour eatery that had operated at 101 Taylor Street. It was one of the earliest examples of transgender pushback against police repression. While the exact date is lost to history, the riots took place three years before the more famous Stonewall uprising in New York City, which is considered by many to be the beginning of the modern LGBT civil rights movement.

The resolution also describes the continued discrimination trans people face in San Francisco and the importance of preserving trans culture in the Tenderloin.

“Many TGILGB persons, specifically transgender and gender-variant individuals, faced and continue to face discrimination in accessing housing, and the Tenderloin was and is a refuge,” states the resolution.

It also emphasizes that a large portion of San Francisco’s homeless population resides in the Tenderloin. According to the 2015 San Francisco Homeless Point-In-Time Count Report and Survey, 29 percent of the people found living on the city’s streets that year identified as transgender, gender-variant, intersex, lesbian, gay, or bisexual.

As previously noted by the B.A.R., Supervisor Kim’s resolution is the result of a deal she helped broker between local developer Group I and LGBT activists who had appealed the planning commission’s decision in late 2016 to allow the developer’s massive in-fill project at 950‐974 Market Street to move forward. The buildings were once home to several gay bars and a shoe store that helped facilitate gay and transgender prostitution and hustling in the area.

The Q Foundation, on behalf of a number of LGBT activists, filed the appeal to call for greater scrutiny of the proposed development’s environmental impacts, including if demolition of the existing structures would hinder forming the transgender historical district in the area.

Group I and the Q Foundation reached an agreement last year in which Group I agreed to support the cultural district in different aspects of its construction. Group I agreed to allow local historians to document the site, which was razed this summer.

Those involved with the cultural district are glad that it’s becoming a reality, even if not as quickly as they had hoped.

“The creation of the Compton’s Transgender Cultural District has undone some of the damage done to the trans community,” Mahogany said. “It’s a really powerful symbol that is incredibly important in San Francisco, as the city is changing so rapidly.”

Alex Madison is an assistant editor at the Bay Area Reporter. This article is published as part of LGBTQ History Month.

If you’re still waiting for the perfect political candidate, you’re being ridiculous