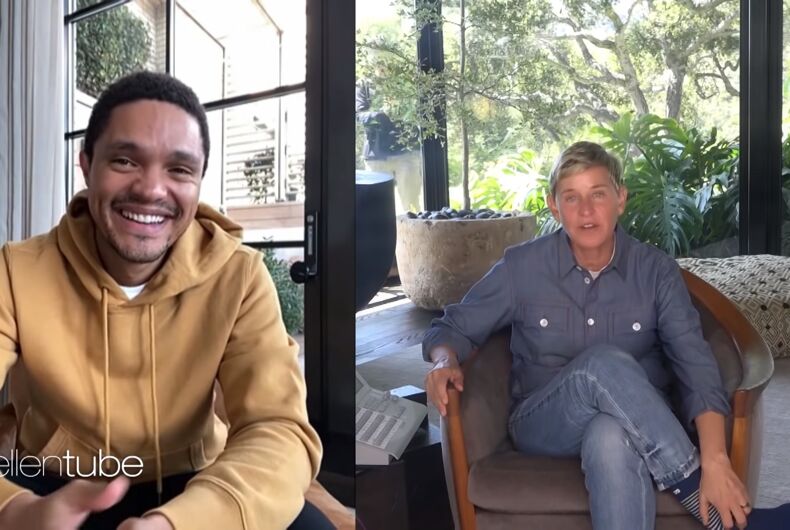 Trevor Noah and Ellen DeGeneres declare they are "Cuomosexual"Photo: Screenshot

It wasn’t long ago that New York Gov. Andrew Cuomo’s (D) handling of the first wave of coronavirus infections earned him kudos nationwide for his steady leadership. People were even declaring themselves “Cuomosexuals.”

Now that Cuomo has resigned after the state attorney general’s investigation found that the governor had sexually harassed and assaulted nearly a dozen women, everyone is wondering if the love affair has ended.

A clip of comedian Trevor Noah joking that he was a Cuomosexual went viral on Twitter shortly after the news broke. But Noah wasn’t the only comedian who went all-in on the joke.

“I’m a Cumosexual too!” Ellen DeGeneres told Noah while doing her show from her home during the pandemic.

Jimmy Fallon. Samantha Bee. John Oliver. The list went on and on.

They were quick to proclaim their love for the man who Politico described as “short-tempered to the point of [being] abusive, was vain about publicity in ways that stood out even by the standards of politicians, and where he went, drama and personal conflict inevitably followed.”

None of the comedians have so far admitted it was just a phase.

"You're more of a national sex symbol."

"You set the example."

"You came across so honest."

We now turn to Randy Rainbow for comment pic.twitter.com/YawUNh4EID

The report by New York State Attorney General Letitia James released offered a stomach-churning portrait of a man who harassed multiple women and would stoop to sullying their reputations in order to preserve his own.

Cuomo benefited from a hiding-in-plain-sight attitude. Everyone in the know was allegedly well aware that Cuomo had a history of abusing the power of his office. His political allies knew it, the media knew it, and yet everyone stoked stories about a Cuomo presidency because of his performance during the pandemic (which is now revealed to be based at least partly on lies).

Fear kept the story from coming out. Jessica Bakeman, a former statehouse reporter, wrote last March about how Cuomo used to harass her, not because he wanted to have sex with her but because “he wanted me to know that I was powerless, that I was small and weak, that I did not deserve what relative power I had.” Bakeman feared that if she went public with the harassment the “emotional terrorists” in the governor’s office would harm her professionally.