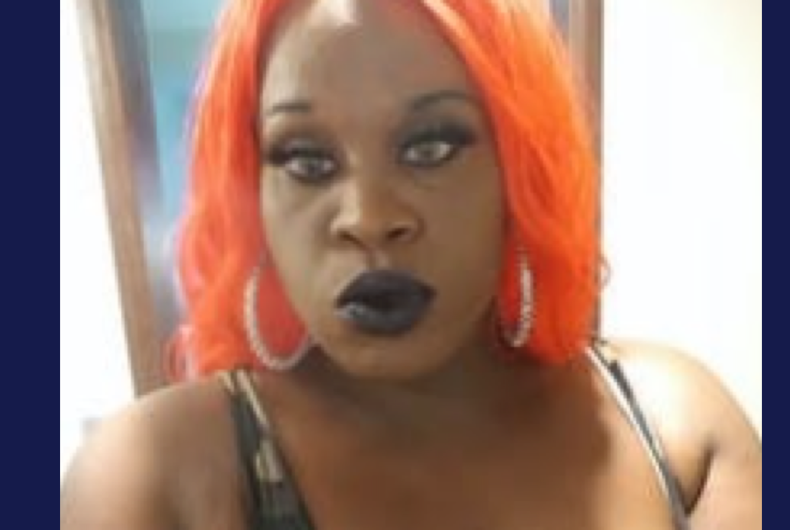 A Black transgender women in Cleveland that was shot to death during Pride month is being remembered this week. Tierramarie Lewis, 36, was found dead following reports of gunshots.

Lewis was misgendered and deadnamed following her death, which led to a delay in the reporting of Lewis’s identity.

Local LGBTQ publication Buckeye Flame reported how friends and people that met Lewis remembered her and interacted with her in her last days.

“She was in our care, if you will, and she’s gone because of the systems that failed,” Tamika “Devinity” Jones, a fellow member of the LGBT Community Center of Greater Cleveland’s Trans Wellness group said.

Despite her identity, Lewis has been deadnamed both in reports by police and coroners, as well as in obituaries and memorials. An online obituary uses both her name and deadname, despite the fact she legally changed her name, as well as they/them pronouns to refer to her.

Lewis was an Ohio native, born in Coshocton and lived most of her life in Columbus before relocating to Cleveland. Yet two months since her murder, not a single local news outlet had covered her death except for “a single post on the online Cleveland Ohio Remembrance page,” according to the Buckeye Flame.

“She was tall, like me, and she was a spirited girl… One day she would have purple hair, one day pink hair and always an outfit to go with those colors,” Jones said of her.

In Cleveland, she attempted to find secure work and housing — but instead became transient. Lewis often felt unwelcome in different shelters or advocacy centers due to her identity as a trans woman. One shelter security guard allegedly mocked her for being trans while other staff took issue with a wig she wore once.

The Norma Herr Women’s Shelter reportedly threw out her belongings in the middle of winter while Lewis tried to secure placement in a program that could lead to permanent housing.

“This girl came from somewhere else to get help and resources that we were supposed to have, and we failed – miserably,” said Jones.

“Instead of asking ‘How can I support you?’ It was ‘No, get out,’” Carey Gibbons, a community outreach coordinator for the Northeast Ohio Coalition for the Homeless, said of her treatment within the various shelters.

Little is still known about the events leading to her death and the investigation since, but Cleveland police — who have continued to refer to her as male and by her deadname, despite her legal name change and the department’s own policy for officers to affirm the identities of trans and gender non-conforming people — have arrested Duane Lunsford for her death.

Lunsford was indicted by a grand jury on June 28 and faces trial for aggravated murder and felony assault. He has pleaded not guilty.

This is reportedly at least the ninth murder of a trans person in the Cleveland area in as many years, lending credence to Eliana Turan, the director of development of the LGBT Community Center of Greater Cleveland, who argued just under a year ago that Cleveland is the “an epicenter” of the ongoing series of violence facing trans and gender non-conforming people in America.

“I am utterly brokenhearted about it,” Gibbons said.

The Human Rights Campaign (HRC) reports Lewis’s death as at least the 33rd violent death or murder of a transgender or gender non-eonforming person in 2021.

“Tierramarie should have had the chance to live the life she wanted to live,” Tori Cooper, director of the HRC’s Transgender Justice Initiative, said in a statement. “As we continue to see so much violence against trans and gender non-conforming people, everyone must speak up and take action to end the stigma and fatal violence that often targets our community.”

A memorial will be held on August 12, the two-month anniversary of her death, by the trans community and advocates in Cleveland to properly remember Lewis.

Tierramarie Lewis was deeply loved. Misgendered and deadnamed by the state, we are only learning of her death in June, this week. Another injustice suffered by trans people even in their death.

We are saddened to learn of the death of Tierramarie Lewis, a Black trans woman who was killed in Cleveland on June 12. Due to misgendering and misnaming from local officials and a lack of media coverage, her death was not reported until recently. https://t.co/mrx0TuPH7w

💐Rest in Power, #TierramarieLewis
.
Memorial: This Thursday August 12th
Corner of 79th & Cedar
1pm EDT
Cleveland, Ohio
.
Reps from Clevelandhomeless, TransOhio and Equality Ohio will be there to mourn, uplift and be in community. pic.twitter.com/0yCzmFfgGw

How do two gay digital nomads afford a life of continuous travel?

Not that long ago everyone was a little Cuomosexual. It was just a phase.