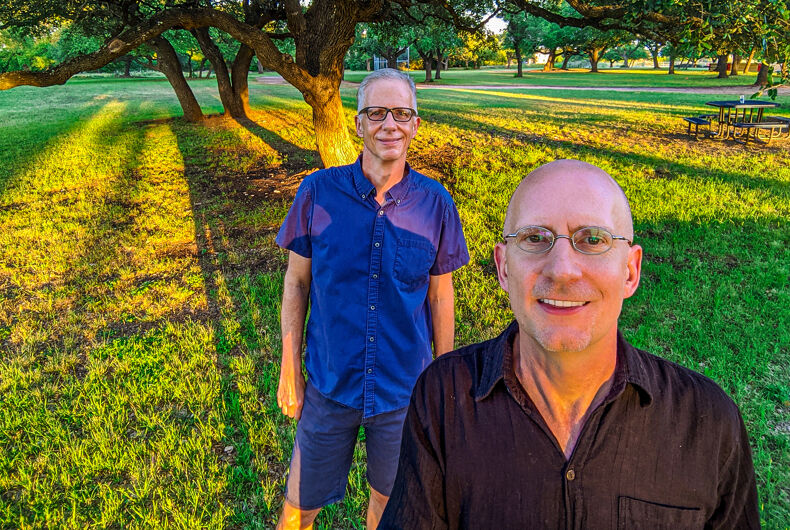 For the last four years, the two of us have traveled the world as digital nomads, living in twelve different countries for at least a month, and visiting another eighteen along the way.

How in the world can we afford to continuously travel like this?

A lot of people assume we’re rich. We’re not — at least not by American standards.

Michael is a writer and editor, and Brent is a novelist and screenwriter. We make our money from Michael’s freelance writing and editing work, and from royalties on Brent’s books, and payments and options on his various movie projects.

We’re making a little bit of money from people who’ve generously decided to sponsor our newsletter, but at this point, that’s negligible.

How much money do we earn? Because neither of us has a conventional job, that always depends. In the last twenty-five years, we’ve made a combined total annual income that’s somewhere between $20,000 and $150,000 a year (USD).

But that’s okay. We’ve always gotten by, and we both agreed long ago that freedom and doing what we love were more important than money.

How have we survived the lean years? Well, in good years, we save, leaving us with cash reserves for the bad ones. We’ve also done well with investments, including stocks and real estate. We’ve somehow even managed to finance our future retirement.

But this doesn’t answer the question of how we pay for this crazy nomad lifestyle of ours.

The answer is: This life costs less than the way we lived back in Seattle, where we used to own a house.

Our mortgage and utilities ran $2700/month. Groceries and restaurants were another $1500/month. Home repairs, auto, gas, and other expenses: $700, with another $1500 for healthcare, entertainment, vacations, and other one-time expenses.

In a city as expensive as Seattle, that actually didn’t go very far. We had a small house and led a fairly modest life. We’ve always been good with stretching our dollar, but we still couldn’t afford to do much.

And since we left Seattle at the end of 2017, the cost of living there has exploded to truly insane levels. We’d estimate that the same “modest” Seattle lifestyle would now cost around $120,000.

As digital nomads, we now live on about $50,000 a year. If we wanted, we could live comfortably on much less.

The key is that we now spend at least part of each year in countries where the cost of living is much cheaper than in America.

Take our monthly rent, which now varies by a lot.

In Bulgaria, where we had a nice two-bedroom apartment, our rent was $300/month. In Istanbul, Turkey, in one of the city’s trendiest neighborhoods, our apartment was $650/month. In Vietnam, we paid $700/month for a very modern apartment that included daily breakfast, housekeeping, a swimming pool, and two bikes.

In Puerto Vallarta, Mexico, where we had a massive, two-bedroom penthouse with housekeeping — and the most incredible view either of us will ever know — we paid $1250/month.

Sometimes we choose to live in more expensive countries. In Switzerland, we paid $2000/month to live in a ridiculously charming chalet high in the Swiss Alps. It was very nice but also shared housing — part of a vibrant coliving community of digital nomads.

When we do choose to live in more expensive countries, we do it in the off and shoulder seasons, not in the middle of the expensive summer rush. But we wouldn’t want to deal with the hordes of tourists anyway.

We sometimes rent our apartments via Airbnb or Booking.com, but it’s always cheaper to find accommodations locally or through word-of-mouth.

And every year, some situation arises where we spend about a month living rent-free. George and Amal have yet to offer us their guesthouse on Lake Como, but we’ve had similar invitations, and we’re certain theirs will arrive eventually.

Expats and nomads are a generous, open bunch.

Before COVID, we also spent about two months a year living on cruise ships, paying for cheaper “repositioning” cruises ($3000/month, tips included). Incredibly, this cost only slightly more than our mortgage back in Seattle, and also allowed us to cross oceans without the large carbon footprint of an airplane ride.

This year, we’ll spend an average of $850/month on rent. Obviously, we no longer pay utilities or home insurance.

As for food, restaurants tend to be much cheaper than back in Seattle, so we eat out a lot more — about three or four times a week. In Istanbul, it was very easy for both of us to eat out well for $10 or less — and a “nice” dinner out was never more than $30 for the both of us (including generous tips). The same nice dinner out in Seattle would easily cost $100 or more.

When living on cruise ships, we have a four-course dinner on a white tablecloth. Every. Single. Night.

We still buy groceries but, extravagances aside, they also tend to be much less expensive than back in Seattle. In addition, the food is almost always fresher and better — though, it must be admitted, many countries have a different relationship with fruits and vegetables. When something is in season, it’s available (and cheap), but when it’s not, it’s not.

This took some getting used to at first, and there are some things you can simply almost never get in many countries, like decent peanut butter and, weirdly, chocolate chips (for cookies).

But we now much prefer this way of living, because it forces us to explore local offerings, gets us more in sync with the natural world, and also reduces our carbon footprint.

One of the things we most enjoy about our lifestyle is discovering some delicious, insanely cheap local treat — homemade guacamole in Mexico; fresh-squeezed orange juice and Turkish coffee in Turkey; fresh-cut mango and pineapple in Thailand; and direct-from-the-farm blackberries and raspberries here in Romania — and then gorging on it almost every day until it’s time to leave.

All told, our total food budget for groceries and all these meals out is about $1200/month.

We have more transportation costs now, but we no longer have to maintain a car, and we’ve become incredibly efficient at accruing frequent flier miles via various credit cards. The total amount of money we spend is probably about what we spent before ($500/month).

We don’t do “vacations,” since our whole life is traveling, but we do occasionally rent hotel rooms en route to different locations ($100/month).

Since we both like going into an “office” to work, we often patronize the local coworking facility ($150/month), though that obviously hasn’t been possible in the COVID era.

Throw in another $800/month for various fees, entertainment, toiletries, clothing, and other expenses.

As Americans, our health insurance situation is insanely complicated — and should probably be the subject of another column — but right now we have a basic Obamacare bronze plan, partly subsidized, with robust travel insurance through SafetyWing; medical expatriation insurance is an absolute must for all travelers, because while foreign healthcare is usually pretty cheap, medical transport can be very expensive all over the world. We currently spend about $500/month.

So, yeah. We’re traveling the world, seeing amazing things and having incredible experiences for less than half the money we’d be spending living that modest, homebody life in Seattle.

There are a few caveats.

While we have a much more active social life now, neither of us drinks much alcohol.

Our clothes are almost entirely functional, and we don’t have the latest tech gadget. We currently use Google Fi, which has cheap international phone plans, and we both have basic Android devices. Most of the time, we watch television on our laptops, not a big-screen TV.

Our accommodations are always some degree of “nice,” but it’s rarely luxury living (although it does often include regular housekeeping). The beds vary in quality. In poorer countries, the utilities don’t always work seamlessly; sometimes you can’t drink the tap water or flush the toilet paper.

And, of course, we’re very lucky that we’re both able to work remotely.

On the other hand, we’re much less frugal than we used to be back in Seattle, and unlike back there, it almost never feels like we’re depriving ourselves of anything. At least in cheaper countries, we basically never decline to do something interesting due to cost.

We’re also usually living in a bungalow on the beach, or in some character-filled old building off some incredibly charming plaza, or in the heart of some fascinating, world-class city. In Malta, with lived for two months in a 400-year-old castle (complete with a bedroom at the top of a stone tower and a forgotten secret passage off the kitchen!).

And did I mention we’re constantly eating out in lovely local restaurants or sidewalk cafes? We’re just as likely to pick up some fantastic picnic from the local market.

From our point of view, this doesn’t feel like much of a trade-off. Our lives feel so much richer and more interesting now that it’s easily worth putting up with a few minor annoyances.

Yes, this is absolutely all about American privilege — and that will definitely be the subject of a future column.

But most of our nomad friends are from America or Western Europe too, and they live about as lavishly as we do. Some live even more frugally — on $20,000 a year per person or less.

This simply requires spending all of your year in cheaper countries. One nomad friend lives on about $11,000 a year, although she’s admittedly often worried about money.

In addition to the sheer enjoyment of travel, people come to nomading for different financial reasons:

The two of us didn’t choose a nomad lifestyle for financial reasons; we chose it for philosophic ones. It was only after we started doing it that the financial benefits for us became apparent. Financially speaking, it’s been downright eerie how perfectly suited this lifestyle is for us.

We feel stupid we didn’t consider it earlier.

But even ten years ago, technological advances hadn’t reached the point where remote work — and travel in general — were as incredibly easy as they are right now.

There’s been a lot of talk recently about how we’re on the verge of a social revolution: nomading and remote work are supposedly “the future.” We agree with this, although it still remains to be seen whether the future will involve three percent of the Western population, or 15 percent.

Regardless, it was absolutely the right choice for us. Recently, someone asked us when we plan to stop being nomads, and Brent immediately said, “Death!”

That’s really the way we feel. The bulk of the appeal still comes from the travel itself, which has been fascinating and revelatory.

On the other hand, it definitely doesn’t hurt that we’re also spending $70,000 less a year.