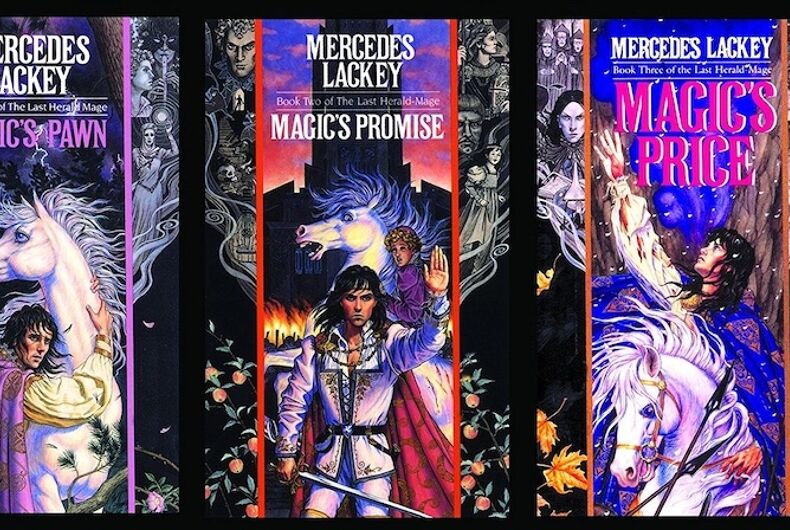 Mercedes Lackey's Valdemar universe will come to life as the "Last Herald-Mage" gets turned into a television seriesPhoto: Book covers

Author Mercedes Lackey’s iconic Valdemar fantasy universe is finally coming to television. The series of novels was one of the first to feature LGBTQ characters as heroes.

EastSiders creator Kit Williamson and author Brittany Cavallaro will adapt the novels for the show. The Last Herald-Mage trilogy will comprise the first season.

Related: Soccer player comes out while he’s surrounded by his teammates. This is what happened next.

With over 50 books set inside the universe, spanning thousands of years of history, the two have an incredible array of options for subsequent seasons beyond the most popular set of stories.

“We are incredibly excited to draw inspiration from the expansive world that Lackey has built, with its rich history, diverse characters and intricate systems of magic,” Williamson told LGBTQ Nation, noting that no decisions have been made on which novels will come next.

Vanyel, the main character of the Last Herald-Mage trilogy, becomes a powerful magician in the series and also discovers his sexuality as he bonds with his Companion, a telepathic magical horse. The two battle everything from depression to dragon-like monsters together. Vanyel’s loves and losses make up large portions of the stories as they would have for a straight character.

The novels are frequently cited by LGBTQ people as inspirational or comforting influences on their lives. LGBTQ people are depicted as both good and bad characters and range over all aspects of life without engaging in blatant stereotypes.

“I discovered the books as a closeted teenager in Mississippi and devoured every one of them I could get my hands on,” Williamson said. “I read Vanyel’s story shortly after I came out and related so deeply to his journey that I reread them immediately after I finished them, then reread them again. I was also particularly drawn in by the Arrows, Mage Winds and Mage Storms trilogies.”

“The universe is so vast that you can literally get lost in it, and that is exactly the kind of escape I needed as a teenager – to inhabit a world where the hero could be gay, but still had to face and overcome challenges, including bigotry, heartbreak, and colddrakes.”

“Vanyel in The Last Herald Mage series was one of the first gay characters I encountered, and as a recently out 16-year-old I can’t stress enough the impact that these books had on me. The Valdemar series was far ahead of its time in the portrayal of LGBTQ characters, and Lackey’s writing afforded them a level of depth and complexity that is still very rare, especially in genre storytelling,” Williamson told Deadline.

Williamson says he bonded with Cavallaro over the books at school and he couldn’t be more excited to be working on the project together with her.

“She is a Velgarth encyclopedia, and she introduced me to more characters in the expanded universe, including the prequels,” he said. “We’re both committed to creating a faithful and reverent adaptation of these books that meant the world to us growing up.”

“I have hoped for decades that The Last Herald-Mage would be adapted for television,” Lackey said when she announced the news. “Now that Radar has optioned the trilogy, I am nearly breathless with excitement. I could not have chosen a better organization to take my work in hand, and Kit and Bri, the producers, absolutely know both their stuff and the material. I love the fact that this is going to be a longform series: episodic TV gives the story all the room it needs. I hope our fans will be as thrilled to see their favorite characters come to life as I am.”

I have quite literally read every Valdemar book at least three times and some (BY THE SWORD, Kerowyn AND Need?? shut up amazing) twenty. I am a Velgarth encyclopedia and super fan and I am losing my damn mind to be able to do this with @kitwilliamson and Radar Pictures! https://t.co/8QqOXc6ocS