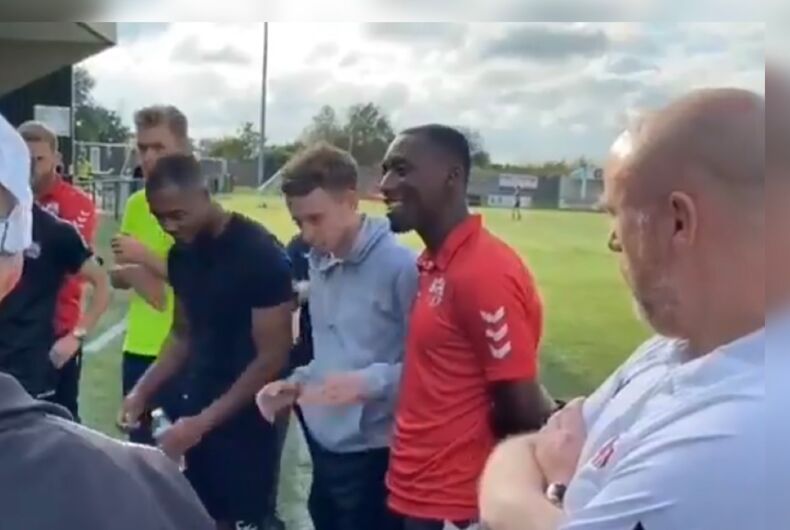 For years, athletes and fans could only speculate when LGBTQ players would come out or enter professional sports leagues, especially in men’s leagues. It seemed that we have inched closer and closer to seeing that come into reality. Now, following two professional athletes from American sports leagues coming out, and the record level amount of LGBTQ athletes present at the current Olympics in Tokyo, it seems that time is coming.

A pro soccer player, Jahmal Howlett-Mundle, decided it was time for him to come out. So he did, both publicly and to his team, earlier this week.

Howlett-Mundle, who plays for Sheppey United F.C. in Kent, England, informed his team’s staff and sat down for an interview explaining his decision to come out as bisexual.

Then, he chose to share the information with his teammates and coaches in a huddle.

“I think most people probably know this already, but I’m bisexual,” he tells them. “I know within football there’s sort of a stigma, but I’m still the same person.”

They respond with rounds of cheers and applause. Simple, yet years in the making.

“I’m not the type of person to reveal large parts of my personal life and usually keep myself to myself,” Howlett-Mundle said in his official interview with the team. “I certainly felt it was the right time to be honest with myself and my loved ones and by being open about my sexuality, maybe it will give others the confidence to follow suit.”

He cited several other English athletes who have come out that have changed their sport and bought LGBTQ representation to him and many others, including former soccer player Thomas Beattie and recent Olympic gold medallist swimmer Tom Daley.

Howlett-Mundle, who is 24, also shared his own statement after.

“I have been in many dressing rooms and not been able to fully express myself. I wanted to be myself and talk about my anxieties regarding the stigma of sexuality in football, but felt I always had to hold back in conversations,” he said.

Then he realized he is “so much happier when I am being myself, so I am no longer going to let anything get in the way of that.”

This is how I feel pic.twitter.com/5jua1fnHPX

The calls & messages I’ve received this week have been really overwhelming as I didn’t expect to have such a positive reaction! I’m so grateful to everybody that has reached out and had kind words to say to me 🥰

Howlett-Mundle’s coming out follows two other athletes coming out in very traditional men’s leagues that had yet to have an active player who is out compete. Carl Nassib of the NFL’s Las Vegas Raiders came out in June, followed shortly by Luke Prokop, who is a prospect for the NHL’s Nashville Predators, in July.

Howlett-Mundle’s team plays in the Southern Counties East Football League, formerly known as the Kent League. Their season commenced this weekend. United F.C. has a storied history, being founded back in 1890.

United F.C. assistant manager Marcel Nimani stated, “I thank Jahmal for the trust that he has put into our club and we as a club are fully supportive of Jahmal in what is an emotional time for him.”

He noted, “Jahmal is a great footballer and leader for us on the pitch and an inspirational influencer off the field. In the 21st century, sexual orientation of a person is a normal existence in our society, but unfortunately in football it’s not quite the case.

“Bravery acts like Jahmal’s play a massive part in normalising members of the LGBTQIA+ community within football. I believe these acts go a long way in supporting many struggling sports people.”

Several other teams, reporters, athletes and supporters from around the world celebrated the moment.

What a great young man Jahmal really is.
From all in the clubs youth section 👏👏 and we all support you and are proud to be involved in this club, which supports all those in here as part of the Sheppey united community 🔴⚪🔴

Thank you for representing the bi community in the game. I stopped playing when I was 17 cause I was struggling with my sexuality. It’s cool knowing that the next kid who has that dilemma can see themselves represented.

If you want bi pride laces let me know, I’ve got spare 💪🏼

It's so important to dismantle stigma around bisexuality, especially in sport. Much love to @SheppeyUFC player Jahmal Howlett-Mundle, who came out to his team as bisexual this week and was met with applause and support 💗💜💙 https://t.co/BZIMMkPlU4

Football is for everybody. Great courage, Jahmal 👊 https://t.co/azcXHVTnzs

That’s an incredibly brave and hard thing to do, so wonderful to see those all around him being so supportive 🏳️‍🌈💪🏻 https://t.co/00L9h4HvX0