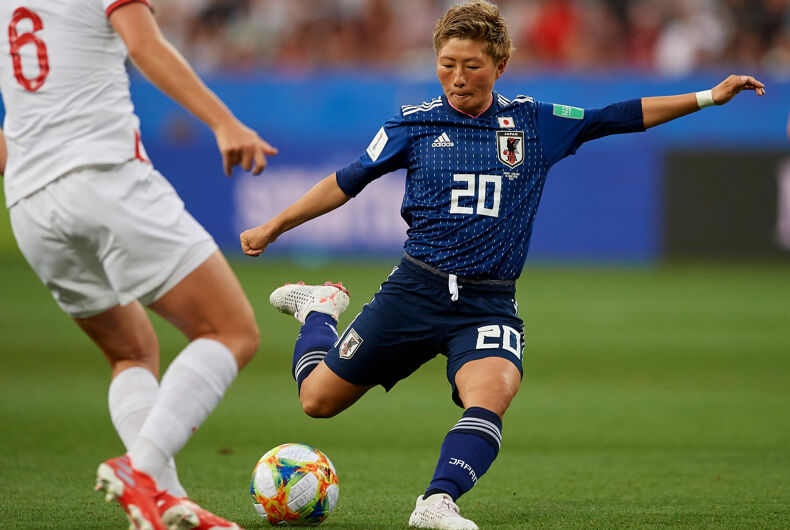 Kumi Yokoyama, a professional soccer player who has played in Japan, Germany, and the United States, has come out as a transgender man.

The 27-year-old, who is currently playing for the Washington Spirit in the pro soccer league NWSL, revealed that they had been transitioning for years and has already received gender-affirming care, but felt the need to stay closeted while playing in Japan.

Yokohama not only felt like they couldn’t be themself as a well-recognized soccer player in Japan, but they felt pressure to date men as well.

The Spirit showed their support for the news and shared that Yokoyama is now using they/them pronouns. The team’s head coach, Richie Burke, said after their most recent game, “We have no time for hate, we only have time for love in our football club. I love Kumi, always will, and I’ll always have a special place for somebody with that mentality.”

“They are very brave, they are very committed to this process, and if that’s what they want to do I’m going to do whatever I can do to support them. As long as they’re happy, I’m happy.”

Yokoyama revealed the news in an interview with their former teammate, Yūki Nagasato, released on YouTube. Nagasato currently plays for Racing Louisville FC, and played with Yokoyama in Frankfurt in 2017 and the Japanese national team from 2015 to 2016.

The 19-minute interview was conducted in Japanese, although Nagasato is considering making a version with English-translated captions.

“I’ve dated several women over the years but I had to stay closeted in Japan,” they said. “In Japan, I’d always be asked if I had a boyfriend, but here, I’m asked if I have a boyfriend or girlfriend.”

Yokoyama’s girlfriend helped encourage them to come out publicly, although they had transitioned and came out to people close to him prior. The team was informed as early as 2019, Burke said.

“When my girlfriend said there was no reason for me to stay closeted, it really hit me. Coming out wasn’t something I was enthusiastic about, but if I think about my life going forward, it would be harder to live closeted,” Yokoyama said, “so I found the courage to come out.”

We support and are so proud of you Kumi💙🏳️‍⚧️Thank you for showing the world it's ok to embrace who you are! https://t.co/Gi7btIAT7l

Yokoyama revealed that they had top surgery around seven years ago at age 20, Japan Times reported. They are undergoing care and will focus on receiving further gender-affirming care once they retire from soccer.

“I never saw myself as a girl, so I hated puberty,” Yokoyama said. “When I reached adulthood, I thought I’d maybe play soccer for another one or two years, so after that season ended I had my breasts removed.”

Yokoyama skipped the usual course of treatment for those transitioning so as to avoid testing positive for hormone use.

“Normally you can’t have [top surgery] unless you’re receiving hormones, but my doctor understood my situation,” they said. “I would have been caught by doping tests if I was on hormones, so I just had the top surgery.”

Yokoyama shared that coming out so long after beginning their gender-affirming care left teammates with joy, but also mixed feelings.

“When I first told my teammates, I was even told it was uncool to hide,” they said. “I had to explain to them what Japanese culture is like and why I felt the need to hide.”

Yokoyama is being hailed as one of the most high-profile Japanese athletes to come out, especially as the Olympics near and the country hosting them struggles with acceptance of LGBTQ people. Legislators’ failure to pass many basic rights for LGBTQ people continues to stay in the news.

“More people in Japan are becoming familiar with the acronym LGBTQ and it’s seen more [in the media], but I thought if influential people like myself don’t come out and use their voices [awareness and acceptance] won’t grow,” they said.

The Canadian-born soccer player Quinn, who is also transgender and uses they/them pronouns, also inspired Yokoyama on their journey. Quinn, who played for the Spirit two years prior to Yokoyama’s arrival, now plays on the OL Reign — the same team where Megan Rapinoe plays.

Yokoyama said they saw Quinn had “Wore a [sweatshirt] that said ‘Protect Trans Kids’ before a game, and I realized that’s what taking action looks like.”

“To be able to accept people you have no relationship with, that’s the kind of person I’d like to become and I hope we can create that society,” they remarked.

Yokoyama has made over 43 appearances for the Japanese National Team since 2015.

From 2012 to 2017, they had 90 goals between two pro teams in Japan. Between professional appearances in Germany and the United States from the last four years, they have made seven goals and started in 25 of their 29 game appearances.

Yokoyama shared the video in a tweet, suggesting in Japanese that there was pushback to their coming out.

But, “I would be grateful if you could continue to support me,” they tweeted.

Many people asking me that adding English subtitles to this video. Actually it will take lots of time to do that, and I’m not sure how accurate will be that transition. but I will add it for all of you over the world who wants hear the word from Kumi own. And I think it’s worth. https://t.co/xTK1TZPx1n