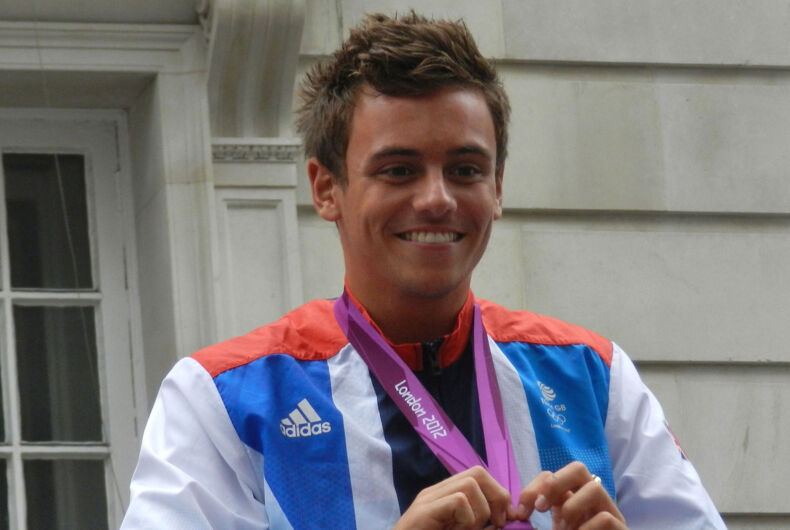 After earning the adoration of the world at four straight Olympic Games, decorated champion diver Tom Daley has finally collected Olympic Gold. He and his partner, Matty Lee, won the 10-meter synchronized platform diving competition this morning in Tokyo.

“I feel incredibly proud to say I am a gay man and also an Olympic champion,” the out Briton said at a press conference after.

Daley, 27, has represented the U.K. at the Olympics since 2008, when he was 14. He is married to Oscar-winning filmmaker and screenwriter Dustin Lance Black, and they have a son, Robbie, together.

These were Lee’s first Olympics, but he has won a gold medal in 10-meter platform at the 2015 European Games as well as the mixed 10-meter synchronized platform at the 2017 European Diving Championships. Lee was also the European junior champion on the three-meter springboard twice before.

Daley and Lee won the Olympic Gold at this Olympics with a final dive (out of six) that earned a 101.01 score, making their complete diving performance score 471.81.

That separated them from Cao Yuan and Chen Aisen of China, whose last dive had a score of 101.52 — which put them just over one point below Daley and Lee, finishing with a score of 470.58 and taking home the silver instead.

This is the first time since 2000 that China has not taken home the gold in this event.

Black, Robbie, and Daley’s mother all watched the games from Canada, where NBC broadcasters joked they could “almost hear the roar from.”

“When I was younger, I always felt like the one who was alone, and different, and didn’t fit in and there was something about me that was always never going to be as good as what society wanted me to be,” Daley said at the post-competition press conference.

“I hope that any young LGBT person out there can see that no matter how alone you feel right now, you are not alone, and that you can achieve anything, and there is a whole lot of your chosen family out here ready to support you.”

He noted that there were more out Olympic competitors at these Games than any other competition in history.

“I feel proud incredibly proud to say I am a gay man and also an Olympic champion,” Daley said.

Afterwards, Black and millions around the world congratulated the diver on the momentous victory.

“I feel incredibly proud to say I am a gay man and also an Olympic champion.”

Gold medal winner Tom Daley says he hopes his performance will inspire young LGBT people to realise “you can achieve anything”.

No words! So so many tears! @TomDaley1994 you're an OLYMPIC CHAMPION! Congratulations Tom and @MattyLee!

How it started: How it’s going: pic.twitter.com/ghBBrbw2w4

The path to Olympic glory is never a straightforward ride.

What a moment for Tom Daley 🥇👏 pic.twitter.com/GcqAjTIzXN