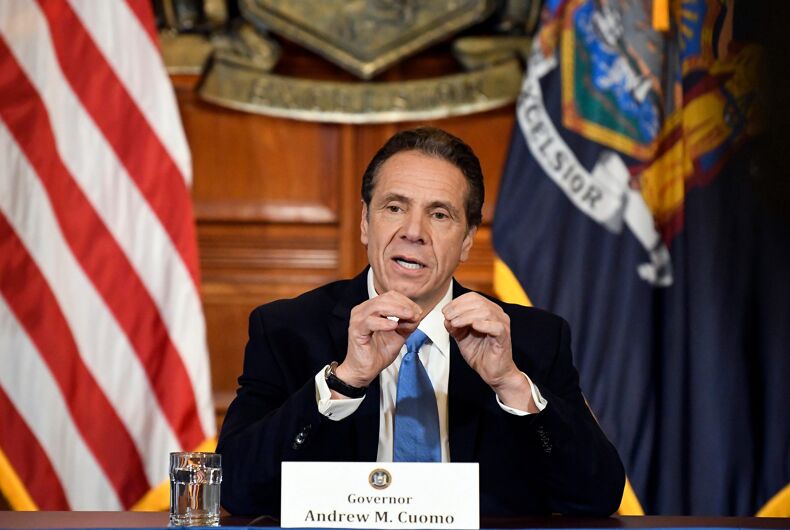 3/16/2020: New York Gov. Andrew Cuomo announces efforts to prevent the spread of the coronavirus during a news conference in the Red Room at the state Capitol.Photo: Shutterstock

New York Gov. Andrew Cuomo (D) has long had a reputation as a tyrant who demands loyalty at all costs and treats his staff like dirt. Politico described him last March as “short-tempered to the point of [being] abusive, was vain about publicity in ways that stood out even by the standards of politicians, and where he went, drama and personal conflict inevitably followed.”

But Cuomo earned a lot of respect from LGBTQ activists for being one of the first governors to push for and sign a marriage equality law. When he first ran for the office in 2010, Cuomo promised, “I want to be the governor who signs the law that makes equality a reality in the state of New York.”

Cuomo deserves a lot of credit for the passage. He held a meeting in March 2011 in which he promised that he would use his political clout to get the bill passed.

“That was a really important moment because he said, specifically, that he would play an important leadership role in getting marriage equality done – that he would do what he needed to do and be a strong closer,” Ross Levi, then-executive director of Empire State Pride Agenda, recalled in a recent interview with City & State New York.

At the time, New York was just the sixth state, and by far the largest, to legalize same-sex marriage. The law’s passage added momentum to the growing movement for marriage equality and came a year before then-President Barack Obama offered his own support.

This accomplishment will always be a highlight of Cuomo’s governorship. But then there’s everything else.

The report by New York State Attorney General Letitia James released last week offers a stomach-churning portrait of a man who harassed multiple women and would stoop to sullying their reputations in order to preserve his own. The stories about the abusive atmosphere in the governor’s office sound an awful lot like the stories about the Trump White House.

Cuomo benefited from the hiding-in-plain-sight attitude that permeates the upper levels of society. Everyone in the know was well aware that Cuomo was, in fact, a monster — perhaps not on the scale of Harvey Weinstein, but someone who would seek outsized retribution for a perceived slight and destroy a career without thinking twice. His political allies knew it, the media knew it, and yet everyone stoked stories about a Cuomo presidency because of his performance during the pandemic (which is now revealed to be based at least party on lies).

Fear kept the story from coming out. Jessica Bakeman, a former statehouse reporter, wrote last March about how Cuomo used to harass her, not because he wanted to have sex with her but because “he wanted me to know that I was powerless, that I was small and weak, that I did not deserve what relative power I had.” Bakeman feared that if she went public with the harassment the “emotional terrorists” in the governor’s office would harm her professionally.

As the saying goes, politics ain’t a beanbag. It can be rough and hard fought. But that doesn’t mean it can’t be principled and ethical. What Cuomo did went well beyond anything that can be justified as the tough arena of political battle.

Did the good that Cuomo do for marriage equality and more generally for LGBTQ people outweigh everything else? Obviously, no. You can’t accept harassment and intimidation as unavoidable collateral damage. As important as the advances have been, they helped burnish Cuomo’s reputation. They made him look like one of the good guys. They earned him LGBTQ votes.

Perhaps that was unavoidable, given the transactional nature of politics. But in retrospect, all the success seems a little less bright than it once did.