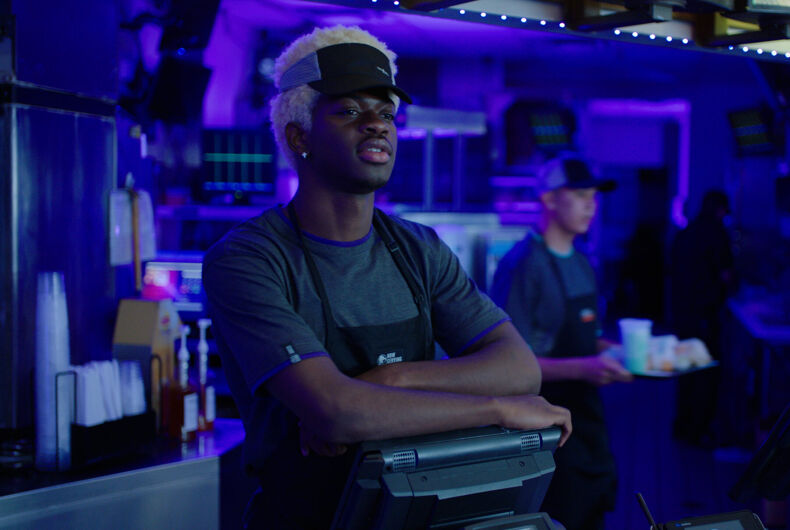 Taco Bell’s slogan is “Live Más,” with “Más” being Spanish for “more” — and if anyone is trying to live as much as any of us, it’s Lil Nas X.

The fast food chain has announced that they have hired — well, rehired — the out rapper to be the company’s chief impact officer (CIO). Taco Bell says the “newly created role” will allow Nas X “to collaborate on the brand experience from the inside out,” including on “menu innovations.”

Taco Bell proudly touts the rapper’s past stint as an employee at a store in Atlanta, when he was an 18-year-old just known as Montero. Now, he’s a budding global superstar preparing to release his first album, Montero, and working with executives at the billion-dollar food chain.

“Back in 2017, Lil Nas X laid down roots working at an Atlanta-area Taco Bell as a team member and less than five years later he’s ascended to stardom by defying conventions, charting his own course and remaining authentically true to himself – all things that Taco Bell stands for in its own way,” the company states in today’s announcement.

In addition to announcing his hiring, Taco Bell outlined how they’re investing in the entertainer and what’s on the table for their renewed relationship.

That will include the company “celebrating” Nas’s album Montero, bringing him in “to recognize and reward young creative individuals” with the Taco Bell Foundation’s Live Más Scholarship, and “efforts to create an impactful experience” for other Taco Bell teams and stores around the world.

“Over the next several months, Taco Bell will ‘Live Nas,’ as Lil Nas lives Más,” they boast.

Taco Bell will have an exclusive “experience” related to the Montero album in the next 60 days, and Nas will help promote their newly revamped menu — including his cameo appearance in their new breakfast menu campaign.

“Lil Nas X knows the job, the experience and the culture Taco Bell creates for its fans – including its people. This unique partnership will deliver on more than just marketing, allowing us to tap into the genius of Lil Nas X to inspire our team members and align with our commitment to unlocking opportunities for young people,” Mark King, the CEO of Taco Bell, said.

Jennifer Frommer, the Senior Vice President at Columbia Records, where Lil Nas X is signed, summed it up: “Lil Nas X is one of the most important voices of this generation. His expertise in understanding social media and youth culture alongside his skills in creating great music makes this partnership with Taco Bell exciting, brave and one of the most innovative campaigns I’ve had the pleasure of creating.”

You dropped this in the break room. pic.twitter.com/sggb3MZGU6

Nas has often referenced his time as a part-time team member at a Taco Bell in posts online, but also alluded to it in the music video for his single “Sun Goes Down.”

In the video, Nas goes back in time to visit his teenage self — shown working at Taco Bell, loving Nicki Minaj, and going to the prom alone. When his teenage self is shown crying in the bathroom as his classmates have a good time, adult Nas comforts him.

“I know that you want to cry,” he sings. “But it’s much more to life than dying.”

Just a taste of @LilNasX’s music video for “Sun Goes Down”. If you haven’t seen it, click the link now. https://t.co/ZkI1clmnDU pic.twitter.com/e3l2sN1qIx

While Lil Nas X spiraled to fame with the viral hit song “Old Town Road” and several hits since, he has yet to release his debut album, although he did release an extended play single, 7, in June 2019, right before he came out.

His #1 hit “Montero (Call Me By Your Name)” has sparked controversy ever since it came out in March, but it’s also sold millions of copies, along with “Sun Goes Down.” Both singles are expected to be on the album, which has yet to have a release date publicly announced.