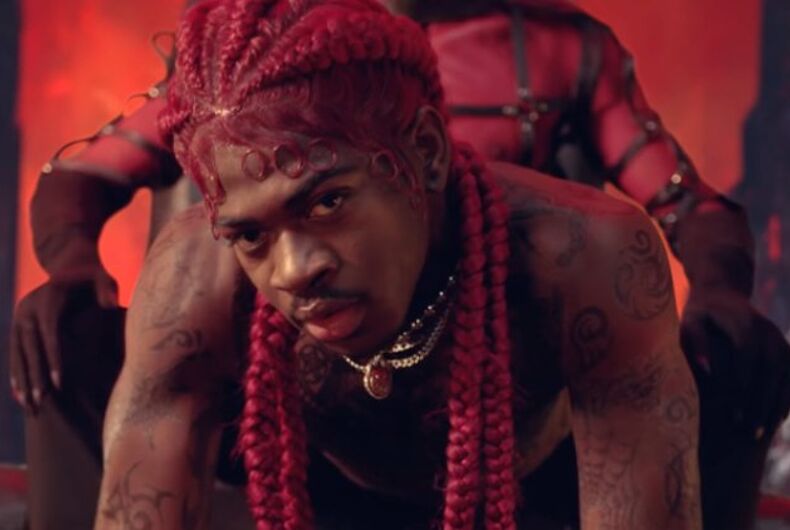 Lil Nas X in "Montero (Call Me By Your Name)"Photo: Screenshot

Lil Nas X’s new song, “Montero (Call Me By Your Name)” debuted at number one on the Billboard Hot 100 songs chart and the out rapper is celebrating on social media, of course.

The song is his second single to hit the charts after “Old Town Road” held the top spot for a record-breaking 19 weeks.

It’s also the first song to hit the top spot backed by a music video featuring a rapper giving the devil a lapdance and includes several graphic references to gay sex. The video spawned immediate outrage from the religious right who condemned the video and rapper.

Just after the release of the song, Nas partnered with the boutique MSCHF to sell “Satan” shoes that have a pentagram, an inverted cross, and allegedly contain human blood. The shoes cost $1018 (a Bible reference) and they were selling 666 of them before Nike sued over the modified sneakers.

A social media expert at promoting his own brand, Nas quickly started mocking everyone upset about the video, pointing out that Christians had told LGBTQ people they were going to hell for years.

god i am gonna do so much sex tonight

i hope my haters are sad. i hope they are crying. i want your tears to fill my grammy cup. 🏹🤍

all jokes aside, we get to control our own destiny, never let the world decide it for you. no matter how dark it may look keep fucking going!

made this video in june 2020 to congratulate my future self. now we here!! NUMBER 1 BABY! 🏹🤍 pic.twitter.com/3Yt2DTqsuW

A doctor diagnosed this Michigan mom with “ego-dystonic lesbianism”