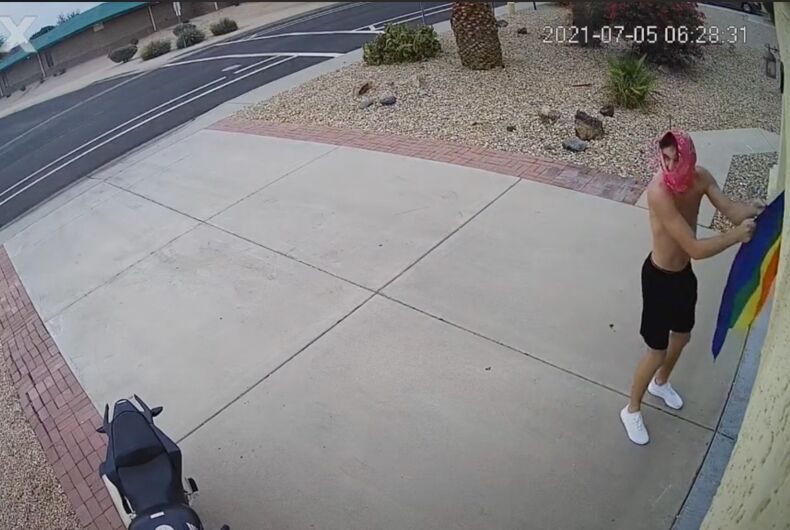 The young man tried several times to rip down the Pride flag, but he just couldn't do it.Photo: Screenshot

An Arizona youth tried and failed to rip a Pride flag off a woman’s garage.

After a video of the teen’s sub-par vandalism was posted on TikTok, he’s become the laughingstock of the internet with his bumbling attempt at a hate crime.

Shared by user @leftovergains, the video shows the young man trying to rip the large rainbow flag off the garage, but he wasn’t strong enough to accomplish his dastardly deed. After jumping and yanking and pulling on the flag, he eventually gives up in frustration and runs off.

The teen, who was wearing a pink bandana around his head, has not been identified. The user included the hashtag #ohnowyouwannawearamask with the video.

In another video she shows how she thwarted the would-be thief. The flag was attached to the wall above the door with metal posts and was hung through the gap above the garage door.

The original video has racked up an astonishing million views, but when one commenter replied with a sexist comment, the uploader was quick to respond.

“As a girl myself, I take offense to that, because if he could pull like me, I might not actually have a flag,” the user replied with a video of herself doing pushups.

Other replies simply mocked the teen for both his lack of criminal skills and his toxic homophobia.

“Imagine being this bothered,” one commenter replied. “THERAPY.”

“I feel embarrassed for him,” another replied.

But most of the replies seemed to agree, “He just wanted it for himself.”