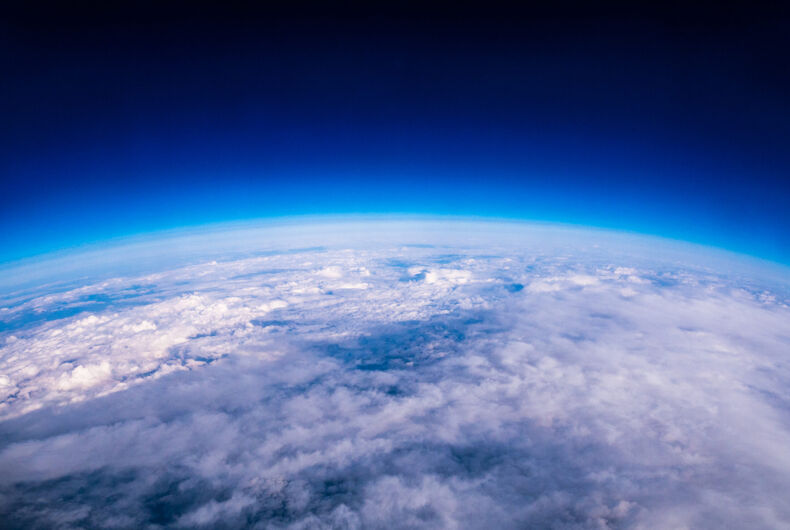 Virgin Galactic founder Richard Branson deflowered the atmosphere by taking a giant leap for unregulated venture capitalism in the first successful private corporate space tourism flight into outer space. After landing back in the New Mexico desert, he led a victory celebration to the admiration of millions around this planet.

Branson and his billionaire rival buddies, Jeff Bezos and Elon Musk, are advancing our scientific knowledge in the production of new technologies that have the potential of aiding humanity to “boldly go where no one has gone before.” Their conquests, nonetheless, signal a seemingly insurmountable failure of the economic systems that gave rise to their obscene wealth.

These men have nothing better to do with their vast fortunes than to pollute space as they take tourist joy rides through the confines of Earth’s atmosphere. But here on Earth, we are saddled with gigantic national debts that have been made worse by the tax laws favoring millionaires, billionaires and their corporations. They get enormous exemptions and don’t pay their fair share.

Several corporate executives pay lower tax rates than their secretaries. Some major corporations pay no taxes. Some have offshore accounts where they pay significantly reduced rates.

Our children and their children will have to pay the debt when it comes due. The ultra-rich should pay their fair share in taxes rather than inventing space toys or creating philanthropic organizations to give away what they should have paid to the federal treasury.

Many people are not angry because they have been led to believe Catholic Church teaching since the Middle Ages, a “God-inspired natural law” that the rich deserve what they make without any governmental regulations getting in the way. On the other hand, as this “law” professes, poor people have very little because they lack the motivation, the intelligence, the spirit of hard work, and, therefore, they deserve their lowly economic position.

This Medieval dictum has been translated for our modern times as the “meritocratic law.” From the time of our birth and throughout our lives, society feeds and continually refeeds us the pablum of meritocracy until it becomes an essential element of our being.

The story goes something like this: For those of us living in the United States, it matters not from which station of life we came. It matters not about our backgrounds and social or personal identities. We each have been born into a system that guarantees equal and equitable access to opportunities.

Success is ours through hard work, study, ambition, and deferring gratification to later in our lives. We will succeed if we “keep our nose stuck to the grindstone” (ouch!) and “pull ourselves up by our bootstraps” (though virtually impossible, without falling over on our faces).

This concept of meritocracy is founded on “personal responsibility,” and those who do not achieve success must accept responsibility for their failures.

While of course, we are all accountable and liable for our actions, what impact do the systemic conditions of our nation have to do with personal success?

While economic disparities plague all nations across the planet, nowhere are these disparities more extreme than in the United States. No other problem affects the security and the survival of nations across our ever-shrinking planet more than the income and resource gap between the super-rich and everyone else.

Though the “meritocracy with personal responsibility” narrative stands as the foundation on which this country was constructed, many of us see it as the fabrication in loose sand that it is.

This ruling class tool, this form of hegemony serves the purpose of mitigating challenges to the inherent and inevitable inequities in “free market” capitalism and, therefore, not only perpetuates but expands the ever-increasing gulf within the socioeconomic class structure.

In the United States, the top one percent of the population has accumulated an estimated 34.6% of the wealth, the next nine percent an estimated 38.5%, and the remaining 90% of the nation a combined accumulation of only 26.9%.

The top financial rewards went to only 400 people increasing their combined income in 2020 during the pandemic to $3.2 trillion dollars, an increase of $240 billion from 2019.  These same 400 people accumulated more wealth than the lower 50% of the U.S. population combined.

Some families have the privilege of purchasing two, or three, or four, or five, or even six homes that they occasionally visit depending on their current mood like the rest of us choose which pair of underwear to don for the day, and many LGBTQ people, particularly youth, go homeless.

Yes, we see a redistribution of wealth in the United States, but certainly not in equitable ways. Workers create goods and services through labor that is detached and alienated from their personal lives and personal interests, thereby amassing inordinate wealth for the owners and the landlords.

Few “succeed” when millions of people have been shut out of the economy. Few actually succeed when people do not have the money to spend on the goods and services in the stores owned and managed by the rich.

If this continues unabated and virtually unregulated, then nationwide and worldwide economic disaster and political upheaval will inevitably follow.

Republicans are brilliant in convincing people to vote for the very Republican candidates who, when elected to office, will work collectively against their economic and political interests. Brilliant indeed, but that is what happens when demagogues use fear and intimidation through the politics of race to divide and conquer people who reside in an anti-intellectual country.

So, billionaires will go play with their toys in outer space. They’ll increase the depletion of the Earth’s ozone layer by injecting carbon from fossil fuels at the speed of sound.

They’ll make more profits from their ultra-rich buddies who want to experience the joy of weightlessness while viewing the curvature of the Earth high atop their perch.

Their corporations and the “free market” deregulating politicians who represent them are literally killing the Earth anyway. So, in the not-too-distant future, the billionaires’ space toys may “save” a few by evacuating humanoids to worlds and galaxies far far away.

Tents up! Camping is skyrocketing in popularity with LGBTQ families