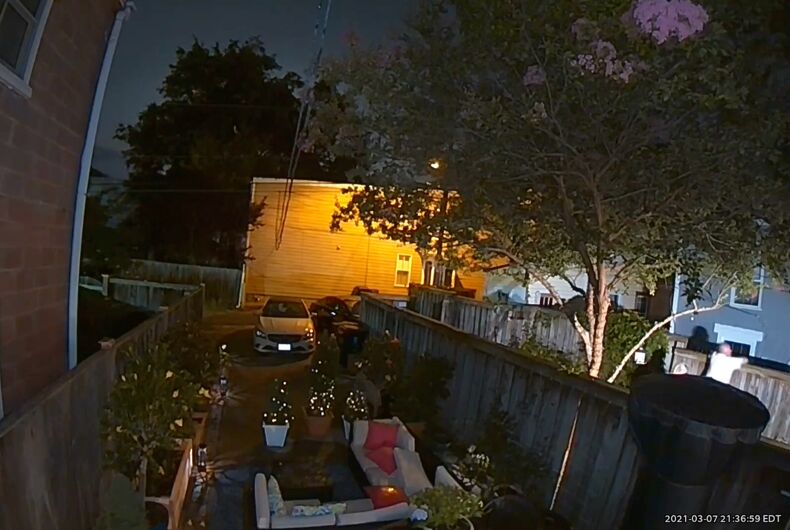 Jim Wood was caught on video hurling anti-gay and anti-Asian slurs at his neighbors.Photo: Screenshot

A dispute between neighbors in Alexandria, Virginia turned vicious over the weekend with one man allegedly hurling racist and anti-LGBTQ slurs during a late-night meltdown over a parking space. Jim Wood and his wife had reportedly crashed their Tesla while trying to park in the alley behind the houses.

First, the man started shouting at the gay couple who live on one side of his home. And when the woman who lives on the other side asked him to shut up, he turned his ire toward her.

Related: Boston Pride abruptly shuts down because the community “needs and wants change”

Kyle and Leo Metz say they heard the collision and went outside to see what had happened when the irate couple started harassing them with anti-Asian comments and calling them “faggots.”

The Metzes have a planter placed near Wood’s parking space that he insists is too close to his property. The couple says they would have been happy to move it over but are less likely to do so after the man’s outburst.

Video from the couple’s Ring camera shows Wood screaming the slur at the men and trying to instigate a fight with Kyle Metz.

“C’mon butt buddy. Come over here, you old faggot!” he shouted at one point as he rushed around his backyard while his wife watched and urged him on.

And when the couple chastised Wood for using anti-gay slurs, he yelled, “Oh no, we love LGBT. I want you to BLEEP him every night.”

And when Julia Kennedy, Wood’s other neighbor, opened her window to tell him to quiet down and stop harassing the Metzes, he called her a “fat whore.”

“What’s your issue?” he screamed as he ran over to her side of the fence. “I see you out the window having sex with your girlfriend all the time.”

“They say I spread COVID. I spread social disease. I’m Asian and that was very hurtful,” Leo Metz told WUSA9.

Mary Wood insisted to the station that she and her husband aren’t prejudiced. Both Mary and Jim Wood are white.

“We’re not anti-gay. As a matter of fact, on the tape, my husband says he loves LBGT. He just thought they were an embarrassment,” she said.