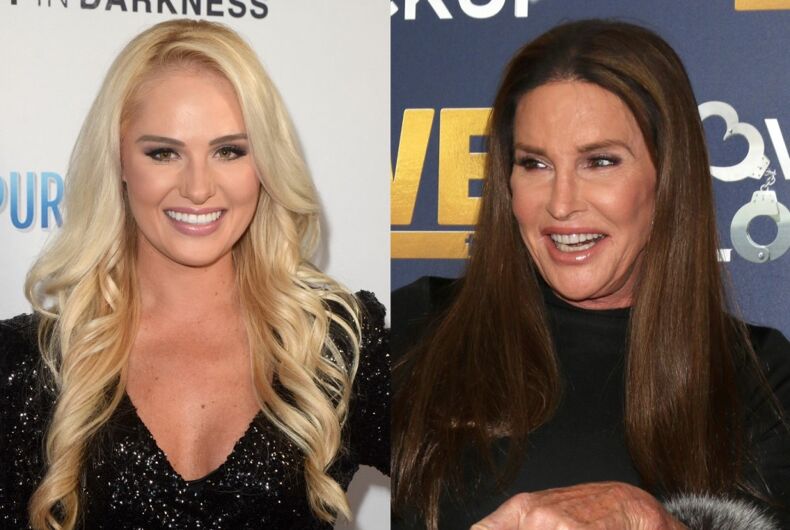 California gubernatorial candidate Caitlyn Jenner (R) was subjected to transphobic taunting at a conservative conference this weekend and an unlikely person is standing up for her: Fox Nation host Tomi Lahren, who has been making anti-LGBTQ statements for years.

Related: “Nazi Barbie” Tomi Lahren goes viral after whining someone called her that to her face

Jenner attended the Conservative Political Action Conference (CPAC) this weekend, where online personality “The Black Conservative Preacher” and another person called her an anti-trans slur and referred to her by her deadname repeatedly as she left her hotel room to go to a car, and they streamed their harassment.

The preacher made comments like “Don’t forget about Jesus!” and “What do you think of the stuff they’re teaching in schools regarding the LGBTQ?” as he followed her.

Caitlyn Jenner being called “Bruce” and chased out of CPAC Dallas. Afterwards, one CPAC attendee refers to Caitlyn as “tr*nny” multiple times. pic.twitter.com/yCp6ytl9K0

That it happened didn’t surprise many people, considering that Republican lawmakers across the country and in Congress don’t support transgender rights and even started a war on trans youth this past year, trying to pass dozens of bills attacking trans rights across the country.

But Tomi Lahren – who once denounced actor Billy Porter for wearing a dress, calling it “attacking traditional men and marriage at every turn” – stood up for Jenner on Twitter.

“There’s no room for your hate in the America First movement,” she wrote. “We believe in freedom and we believe in limited government. The way she chooses to live her personal life harms you in no way!”

Hearing how some “conservatives” treated @Caitlyn_Jenner at CPAC makes my blood boil. There’s no room for your hate in the America First movement. We believe in freedom and we believe in limited government. The way she chooses to live her personal life harms you in no way!

Some people were surprised that Lahren stood up for Jenner, considering her past statements on LGBTQ people.

Tomi Lahren says there is "no room for hate in the America First movement."

I'd argue there isn't room for anything else.

BTW, if you think Tomi really cares about the LGBTQ community, you should really do some research first. She's just posturing. She has a real problem with it, especially Trans.

Here are just a few of the many hateful comments to spewed regarding the Trans community. pic.twitter.com/jKTO5NdJkr

Many conservatives responded to Lahren’s tweet as well, explaining why they believe that transphobic harassment is good.

We do not believe in the lie of “trans”. You cannot force us to accept your new religious dogma. It goes against the Bible.

Tomi, it's not hate to say the Bruce Jenner's sexual and gender choices are contrary to nature, and would be catastrophic if widely adopted. That's just good biology and common sense.

This isn’t the first time the right has criticized Lahren for not treating Jenner with sufficient contempt. Just last month, she received a barrage of criticism online when she correctly referred to Jenner with she/her pronouns.