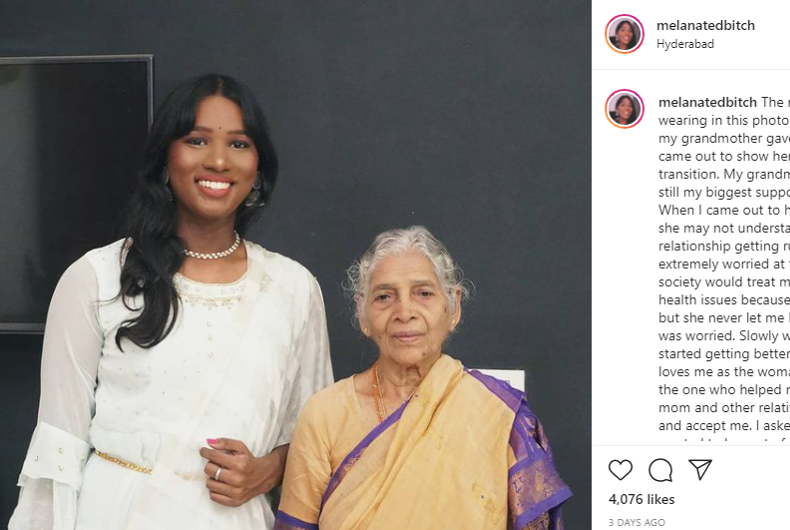 A heartwarming story shared on Instagram has gone viral and made thousands cry and cheer across the internet.

A popular blog shared the video story of an 87-year-old woman who learned a year ago that her granddaughter is transgender. While it significantly affected her, she proudly supports her grandchild, and online users are calling it “the most wholesome story” to watch.

The video is an Instagram reel posted by the Humans of Bombay, a social media blog started by Karishma Mehta.

The trans woman in the video is named Kali, known on Instagram as @melanatedbitch.

“The necklace I’m wearing in this photo was the first gift my grandmother gave to me after I came out to show her support for my transition,” Kali wrote in an Instagram post. “My grandmother was and is still my biggest support in my life.”

She explained, “When I came out to her, I was scared she may not understand it and [that] our relationship [was] getting ruined. She was extremely worried at first about how society would treat me and had some health issues because of the stress, but she never let me know that she was worried.”

“Slowly with time, she started getting better and now fully loves me as the woman I am. She was the one who helped me make my mom and other relatives understand and accept me,” Kali shared.

That’s when she asked her grandmother “If she wanted to be part of a reel for @officialhumansofbombay and she was so excited to do it with me.”

The reason she gave to her granddaughter was that “she wants to give a strong message to society to help every transgender person out there to gain acceptance and love from their family.”

The reel includes a montage of pictures and clips with Kali’s grandmother, and similar to other Human of Bombay reels, it includes captions that explain her story.

“My granddaughter, Kali, was assigned male at birth,” the captions read, “but a year ago, she told me, ‘Dadi, I’m woman,'” referring to the Hindi name for paternal grandmothers.

Kali’s grandmother, according to the captions, admits that she “didn’t take her coming out well and fell ill.”

She explained that she was “worried about her future” and “how society would treat her,” let alone the rest of their family.

When her health recovered, however, Kali’s grandmother saw her granddaughter “suffering” without support. “I wanted to put an end to it,” she stated.

So she “took [her] jewelry… and gave it to Kali because she wanted to let her know ‘I love and accept her.’ Now she proudly introduces her as her granddaughter to everyone.

“I just want her to be happy,” another caption adds.

As the video concludes, Kali’s grandmother points to the caption, “If I can be 87 and accepting, I’m sure so can you!”

The caption to the reel reports that the 87-year-old no longer cares about “log kya kahenge” – a Hindi phrase meaning, “what will people think.”

Kali commented on the @HumansofBombay post, “My grandmother was and is still the strongest support in my life. My grandmother wants our story to help every transgender person to gain acceptance from their family.

The video has received millions of views and over 275,000 likes on Instagram alone.