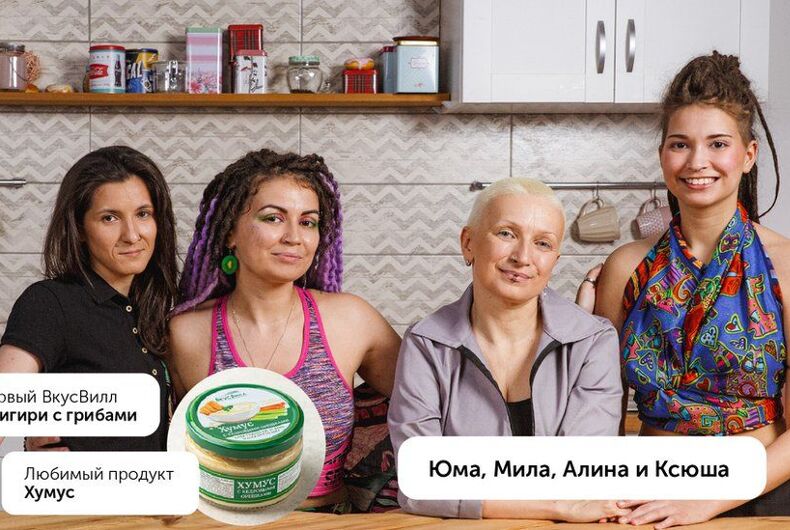 The lesbian couple and their family in VkusVill's advertisementPhoto: VkusVill

VkusVill, a Russian supermarket chain, recently pulled its ad featuring a lesbian couple after homophobes complained. Now, the couple is receiving death threats, and LGBTQ activists have criticized the chain for bowing to haters.

The chain posted the ad featuring the lesbian couple at the end of Pride month. It showed two women named Yuma and Zhenya and their two children, Mila and Alina. It was part of a larger campaign featuring different types of Russians who shop at VkusVill (whose English name translates into Tasteville).

“We think it would be hypocritical not to talk about the real families among our shoppers,” the store wrote in its ad. It also included a brief article that mentioned the family’s love for the store’s hummus and onigiri rice balls with mushrooms. The company labeled the ad and article as only appropriate for viewers ages 18 or older, most likely to avoid breaking Russia’s law against “homosexual propaganda.”

However, Russian conservatives began criticizing the ad immediately as alienating and offensive. The chain pulled the ad on July 4, and its founder, Andrei Krivenko, issued an apology.

“There was an article here that hurt the feelings of many of our customers, staff, partners and suppliers. We regret that this has happened, and we consider this publication to be our mistake, a manifestation of the unprofessionalism of certain employees,” his statement read. “The goal of our company is to enable our customers to receive fresh and delicious products every day, and not to publish articles that reflect any political or social views.”

Pro-LGBTQ Russians then began criticizing the chain for pulling the ad, calling its leaders cowardly for not standing up to anti-LGBTQ voices.

Mila, one of the daughters featured in the ad, said homophobes had sent harassing messages and “threats to murder my family” after the ad ran, according to the BBC. She added, “I also received just as many messages of support.”

A GOP congressman has close ties to a white supremacist group. The party doesn’t care.