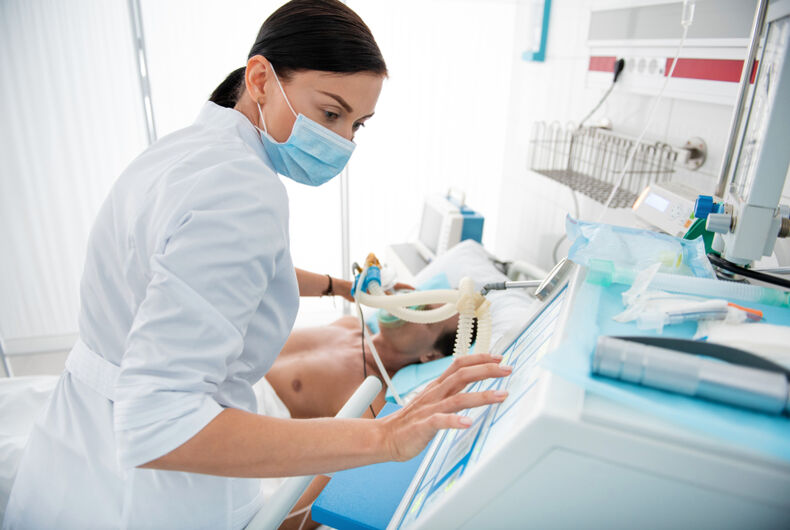 Doctors across the country are saying they’re frustrated with the latest surge in coronavirus hospitalizations due to severe cases of the disease, which one doctor called “nearly 100 percent preventable” because of the vaccines.

And they’re reporting that patients are expressing regret for refusing to get the vaccine before becoming extremely ill.

“It is heart-wrenching to see unvaccinated individuals come into the hospital with regret,” Dr. Ryan Dare of the University of Arkansas for Medical Sciences told NBC News. He said that he has heard patients say that “if they could do it all over again, [they] would have had the vaccine in a second.”

“The decision to get a vaccination should not be hard. Patients know that now, but they know it too late.”

Hospitals in the U.S. are receiving a new wave of coronavirus patients as the Delta variant spreads, and Arkansas is one of the states with the lowest vaccine rates in the country with only 35 percent of the population fully vaccinated.

“It’s just a mess,” said Dr. Mayrol Juarez, who works at Mercy Hospital Springfield in Missouri. That hospital had an influx of over 120 COVID-19 patients this week, the most it has seen since the beginning of the pandemic. Only 39 percent of that state has gotten vaccinated, lower than the national 48 percent rate.

“Everybody in the hospital is doing extra shifts, calling out for other hospitals to help.”

Juarez said that he too is hearing patients who are “shocked” to learn that COVID-19 is real and can kill.

“A comment they make all the time is that they wish that they knew they were going to end up in the hospital this sick and they would have made a different choice and got the vaccine,” he said.

“This isn’t the boogeyman,” said Eric Frederick, who works at the same hospital. “There are 120 real human beings in the hospital right now struggling with this illness. … And every one will tell you — this isn’t fake.”

Dr. Anthony Fauci said earlier this week that almost everyone who died of COVID-19 in June was unvaccinated.

“If you look at the number of deaths, about 99.2% of them are unvaccinated,” he said on NBC’s Meet the Press. “About 0.8% are vaccinated. No vaccine is perfect.”

“It’s really sad and tragic that most all of these are avoidable and preventable.”

Dr. Andy Dunn of the Wyoming Medical Center said he’s “beyond frustrated” that only 35 percent of adults got the vaccine in his state.

“Whether it’s the cowboy way or whatever, the mentality of so much of Wyoming is just ‘we’re not doing it,'” he said. “It’s really horrible and heartbreaking.”

That people — like those patients in Arkansas — ignore the advice of doctors isn’t a surprise to LGBTQ advocates.

Earlier this year, Arkansas became the first state to defy major medical associations and ban transgender youth from getting life-saving gender-affirming medical care in the state. The legislature passed a law to ban doctors from prescribing puberty blockers and hormones for trans minors, essentially blocking doctors from giving care based on their medical opinions due to lawmakers’ political opinions.

Arkansas Gov. Asa Hutchinson (R) took the side of science on both issues. He vetoed the trans medical care ban, saying that “government under a conservative philosophy should be restrained.” The legislature overrode his veto.

As it comes to the vaccine, Gov. Hutchinson is going on a statewide tour to promote vaccine confidence in attempt to raise the state’s vaccination rate to 50 percent by the end of July 2021.

“It starts with a conversation with communities,” he said. “It does come down to individual responsibility. I’m the leader of this state. I want to do all I can. It would be easier for me to sit back and say, ‘I’m weary of this COVID conversation.’ I’m sure everybody in this room is. But that’s not leadership.

“Leadership is saying, ‘Let’s plow on… let’s get through this. Let’s see if we can do a little bit better.’”

School blamed gay student for the horrific bullying he endured. His two dads are suing.