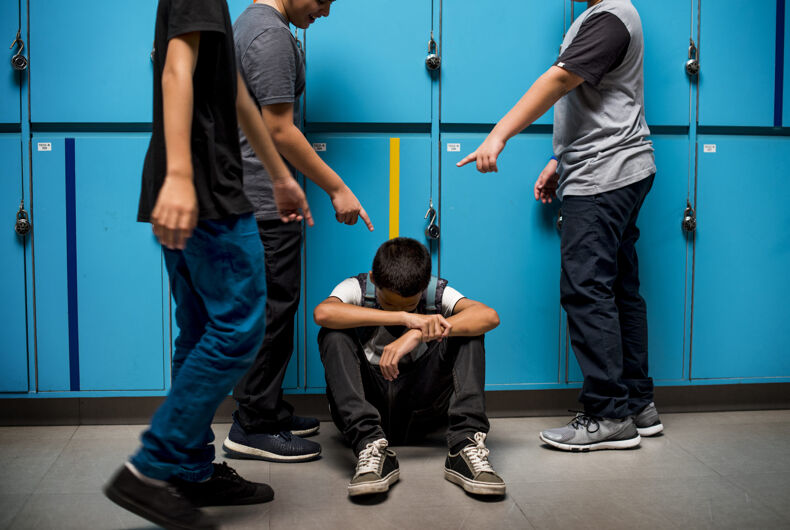 A family has filed a federal lawsuit against a New York City public school for not only failing to prevent, but furthering, homophobic treatment of their child after he came out as gay.

The school in question is Intermediate School 126 in Astoria, Queens, known as the Albert Shanker School for Visual and Performing Arts. A middle schooler has experienced two years of bullying and hostility from both peers and educators, both because he came out as gay and his parents are gay, the lawsuit alleges.

The student is only identified by the initials “D.S.” in the lawsuit filed in Manhattan Federal Court just over a week ago.

While attending I.S. 126Q, D.S. was attacked both verbally and physically by peers. They allegedly bullied him for “acting like a girl,” remarking him with slurs and insults such as “faggot ass” and “bitch,” and they would tell him “that he would be damned to hell by God because of his ‘lifestyle.’”

When administrators at the school received these allegations from D.S., they resulted in “half-hearted investigations,” which “deemed many of D.S.’s complaints unfounded.” When D.S. was told he was “destined to burn in hell,” administrators allegedly called the remark a “difference of opinion.”

One of his adoptive fathers, Jason Cianciotto, told Gay City News that the bullying “continued no matter what we did.”

D.S. was told by a dean at the school, in front of Cianciotto, that it was “inappropriate” to mention his sexual orientation at school.

“She also said, ‘Well, if [D.S] didn’t talk about being gay in school, then these things wouldn’t happen.’ The school’s responsibility was to follow the law and stop and prevent the bullying from happening, not to blame my son for it and just try to get him not to be himself,” Cianciotto charged.

Teachers and other staff also didn’t help to protect D.S. According to the lawsuit, D.S. – who also has a learning disability – was told that a story he was sharing during a presentation that described his uncle, a transgender man, was “too personal” and he was “immediately cut off by the teacher.”

“I had falsely made the presumption that when it came to bullying in school, while we couldn’t prevent it from happening consistently, that the school would follow that [anti-discrimination laws] and put a stop to it immediately,” Cianciotto said.

Instead, the treatment persisted, and D.S. began hurting himself and discussing death frequently. He would “poke his fingers into his eyes” and considered suicide before his parents withdrew him from the school.

“It was so horrific and tragic and sad to see,” Cianciotto remarked, noting that “the comfort that he had gotten after living with us over time and approaching his adoption hearing date” was “interfered with by what was happening at school.”

D.S. had gone through seven foster homes by the age he was ten after being removed from the care of his birth family at seven, according to the New York Post. The last foster parents he had abandoned him at the hospital as he was getting a malignant brain tumor removed.

Instead, Cianciotto learned of D.S.’s story and texted his husband Courter Simmons, “I think we found our son.”

D.S. was adjusting well under his new family’s care, until he began attending I.S. 126Q. Last year, a hearing was called under the Individuals with Disabilities Education Act, and it was determined that “not only did the school fail to address the bullying,” but the dean had “went so far as to blame the student for making himself a target of the bullying” with her remarks.

“Instead of being greeted with the same kind of support and welcoming that he had gotten from our family… he was met with bullying and harassment, and dismissal, and even religious-based condemnation of himself, and his dads,” Cianciotto told Gay City News.

D.S. is now in high school, and Cianciotto called his current school “different like night and day compared to IS 126.”

The New York City Department of Education told the Post that they  “will review the complaint and immediately investigate the claims.” D.S.’s family is seeking unspecified damages in the lawsuit.

Unvaccinated patients are “shocked” that COVID-19 is real