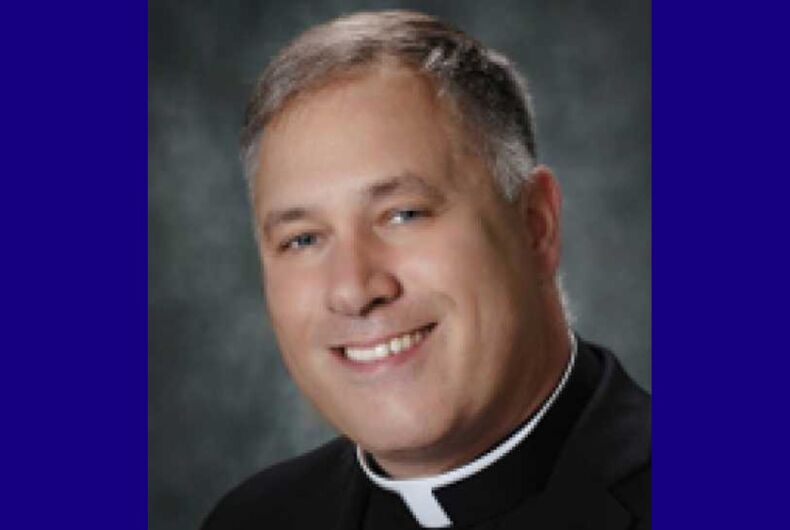 Monsignor Jeffrey Burrill has resigned from his position as general secretary of the U.S. Conference of Catholic Bishops (USCCB) after a conservative Catholic website obtained data from Grindr and found out that he was likely having sex with men for years.

Burrill, a priest from Wisconsin, worked for the USCCB since 2016 and was elected general secretary last year. USCCB is a Catholic organization made up of members of the Church’s hierarchy and opposes LGBTQ equality. It has worked against the development of an LGBTQ suicide hotline, tried to stop same-sex couples from adopting children, repeatedly criticized President Joe Biden for supporting LGBTQ rights, and supported anti-trans legislation this year.

Burrill was “the highest-ranking American cleric who is not a bishop,” according to the Catholic website The Pillar, until that website obtained data from Grindr that showed Burrill using the app.

The Pillar says that it obtained the data legally from a vendor who was selling anonymized data that Grindr sold in accordance with its terms of service.

The data doesn’t include names or pictures of users, but Grindr assigns a unique number to each phone and tracks timestamped location data based on GPS signals. That data is then aggregated and sold.

The Pillar identified a phone was using Grindr from the USCCB staff residence in Wisconsin from 2018 to 2020. They tracked that phone to Burrill’s family lake house, to the homes of his family members, and to an apartment in his hometown where he’s listed as a resident, leading them to believe that the phone belonged to Burrill and not to someone else who works at USCCB.

Burrill’s alleged phone also sent a GPS signal from inside a Las Vegas gay bathhouse, as well as other bathhouses in cities that he traveled to for his work.

That he was using Grindr was enough to show The Pillar that he “engaged in serial and illicit sexual activity” because members of the Catholic clergy are not supposed to be having sex at all.

But the website goes further and says that his use of Grindr is contradictory to Burrill’s role in helping coordinate the Catholic Church’s responses to child sex abuse, even though they have no evidence that Burrill was engaged in sexual activity with minors.

The website even quotes a Catholic seminary professor who said that using Grindr is “only a step away from sexual predation,” a sign of just how anti-LGBTQ the Catholic Church remains in 2021, propagating hateful stereotypes of gay and bi men as rapists and child molesters.

The Pillar shared the data with USCCB before publishing their article and yesterday afternoon USCCB announced that Burrill had resigned.

The story raises questions about data privacy, showing that even data that isn’t associated with names can still be used to out someone.

Grindr’s privacy policy claims that the app is “safe space” for LGBTQ people. It has sold data that includes users’ gender, age, and location in the past but it claims to have stopped selling location data in April 2020.

Grindr has not commented on the story.