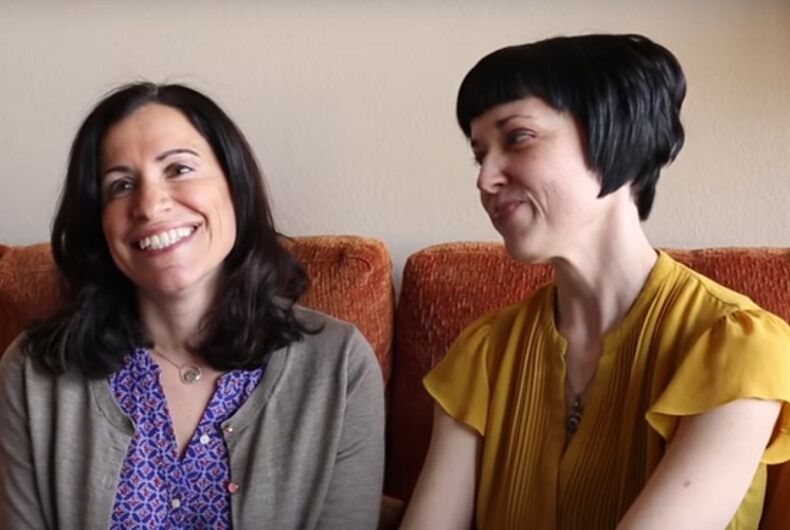 A lesbian couple that was rejected as foster parents by a Catholic organization is suing.

Last year, Fatma Marouf and Bryn Esplin, who are both professors at Texas A&M, were trying to start a family. They had just gotten married and found that reproductive technology wouldn’t work for them.

Since Fatma, a law professor, was familiar with the Catholic Charities of Fort Worth (CCFW) through work she does on immigration, they couple applied to take in an unaccompanied refugee child. They exchanged emails emails with the organization and made it clear that they were a married couple, and everything seemed fine.

Then they had a phone conversation with Donna Springer, the Chair of CCFW’s Executive Committee, and the CCFW understood that they were both women.

According to their complaint, Springer told Fatma and Bryn that they couldn’t foster a child because they don’t “mirror the holy family.”

The CCFW, of course, doesn’t require couples to be Jewish or to involve an adult man married to a 12-year-old girl. The only aspect of Mary and Joseph that needs to be mirrored, apparently, is that they were a heterosexual couple.

Fatma said that she was shocked by what she heard, so she asked about the LGBT kids who CCFW is responsible for finding homes for. She says that Springer told her that none of the 700 kids they’re in charge of are LGBT.

The CCFW is a non-profit organization associated with the United States Conference of Catholic Bishops. It receives federal funding to place foster children.

Fatma and Bryn complained to the Department of Health and Human Services, but they never got a response.

Now they’re suing both the federal government and the Conference of Catholic Bishops, saying that their due process and equal protection rights were violated.

Their lawsuit, filed by Lambda Legal, also says that the First Amendment was violated because the federal government is giving money to an organization that is using that money to advance its religious principles.

The couple says that the CCFW is putting religion before the best interests of the child by denying children access to good homes and by sending a message to the LGBT kids that there is something wrong with them.

“Refugee children have been through enough trauma to last a lifetime,” Fatma said. “They need love, stability and support, which Bryn and I have in abundance. But in discriminating against us, the agency put their religious views of LGBT people above what is best for the kids in their care.”