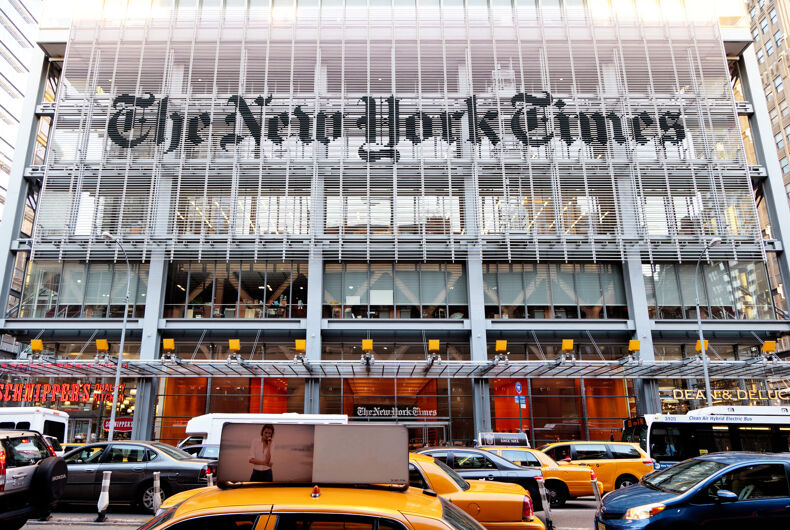 Management at the New York Times is continuing to refuse requests that they change policy to allow journalists to update their published names, or bylines, on articles after they come out as transgender.

News that the newspaper first refused the request from New York Times Guild, the union representing over 1,200 Times journalists, came in April. The Guild revealed that the Times has still refused the simple policy request in subsequent contract negotiations with the union, although they have given in on other Guild requests.

The Times management is also refusing to allow for the implementation of gender-neutral bathrooms on every floor of their headquarters, the New York Times Building, in Manhattan.

In March, the ongoing negotiations began to update the collective bargaining agreement between management and the union representing most of the paper’s journalists. In April, Times media reporter Ben Smith reported that the News Guild of New York, which the Times Guild belongs to, stated that the Times was resisting the byline policy changes because “retroactively correcting deadnames would be ‘fraught.'”

“We countered that incorrectly crediting journalists for their body of work would be ‘fraught’ as well,” the News Guild added.

Yesterday, the Times Guild shared via Twitter that they had successfully received their “first contract win,” with Times management coming to an agreement with the paper’s writers on their parental leave policy, granting “fully paid parental leave for up to 20 weeks” for all members of the Guild. It goes into effect immediately.

The Guild is still negotiating their return to work policy and diversity, equity, and inclusion (DEI) policies, however. The Guild is resisting the Times‘s previously requested full return-to-office date on September 7, calling it “unrealistic and unsafe.”

Parental leave win: *All members* are eligible for fully paid parental leave for up to 20 weeks. Plus, we’ve codified in the contract that any improvements to the policy MUST be extended to Guild members, ending management’s ability to target union members as a busting tactic.

They also shared that Times management is still refusing their request to change the byline policy for current writers who are transgender. They report that the company’s current position is “if we changed bylines digitally after the fact, there would need to be a record of correction in every case,” and furthermore that Times management believes that it would be “unacceptable that the print archives would not match what is online.”

The Times Guild promises they “aren’t budging on the issue,” noting one of their bargaining committee members’ rebuttal, “Why are we putting the sanctity of our archives ahead of the human dignity of our workers?”

On DEI: The company continues to resist the bargaining committee’s ask to let transgender employees update their bylines on the site when they transition. But we aren’t budging on this issue. pic.twitter.com/jW6zMhbBVK

The Guild also said they received “no response” to other DEI policy requests such as changes to the Times‘ performance evaluation systems which the Guild found disproportionately harms Black and Hispanic employees of the Times in an internal study that management said they “disagree” with.

Times management continues to resist commitments to having a gender-neutral bathrooms, which the Guild is currently requesting for on every other floor.

The Guild and management will continue to negotiate throughout the coming weeks. The Times management is continuing not to recognize the New York Times Tech Guild, which is now representing over 600 other employees at the paper. The Times Guild has “strongly urged” management to allow for the employees to participate in a voluntary union election, which has been denied so far.

More DEI: We’re continuing to push for all-gender bathrooms on every other floor, and we want to keep pushing to remove the Times’ “grading system,” which the Guild has found to contain disparities, esp for Black & Hispanic employees at the company. pic.twitter.com/GTg3adXnG4

NYT CEO @meredith_levien just rejected our proposal for an accessible, online election. Hundreds of workers (70% of our unit) signed the letter asking leadership to work with us in good faith. Management refused.
While we are disappointed, we press on. We WILL win our union ✊

In a statement, the Trans Journalists Association called the Times management’s position “unacceptable.”

In a blanket statement addressing the issue, the Association said, “We, the Trans Journalists Association, charge that it’s inappropriate not to retroactively change a trans journalist’s byline when that is what the journalist in question requests. We strongly urge newsrooms and media organizations to change a trans journalist’s byline to reflect their lived experience without issuing a correction or a disclaimer.”

They noted, “Updating an author’s byline without a disclaimer would not negatively impact the credibility of the reporting, nor the integrity of the media organization updating the byline, in any way.”

This is unacceptable. You can read our statement on the issue here: https://t.co/TmeaWKxFZn https://t.co/KLhcR8Egdv

In March, LGBTQ media advocates GLAAD gave the Times a failing grade in their inaugural Media Report Card report. Based on their coverage of the passing of the Equality Act through the House of Representatives, GLAAD found that the Times and seven other mainstream publications had “failed to include any quotes from LGBTQ advocates” and “failed to contextualize need for Equality Act.”

Specifically, they denounced the Times‘s insistence to refer to the Equality Act as “gay and transgender” legislation in accordance with their current style guide, which GLAAD states is “leaving out bisexual, lesbian, queer, and other members of LGBTQ community.”

GLAAD also criticized the paper for, outside of a quote from then-Assistant Secretary of Health nominee Dr. Rachel Levine, not including the voices of trans people in their reporting. Instead, the paper gave “lengthy space to inaccurate, transphobic rhetoric from several elected officials without countering or contextualizing as false.”

GLAAD noted that it was not trying to “shame or attack” the journalists or publications featured in the report, but rather offer “suggestions, best practices, and links to helpful resources” alongside the grades.

The New York Times Company — which also owns T Magazine and Wirecutter — received a 65 rating from the Human Right Campaign’s Corporate Equality Index, based on employee surveys, both in 2020 and 2021.