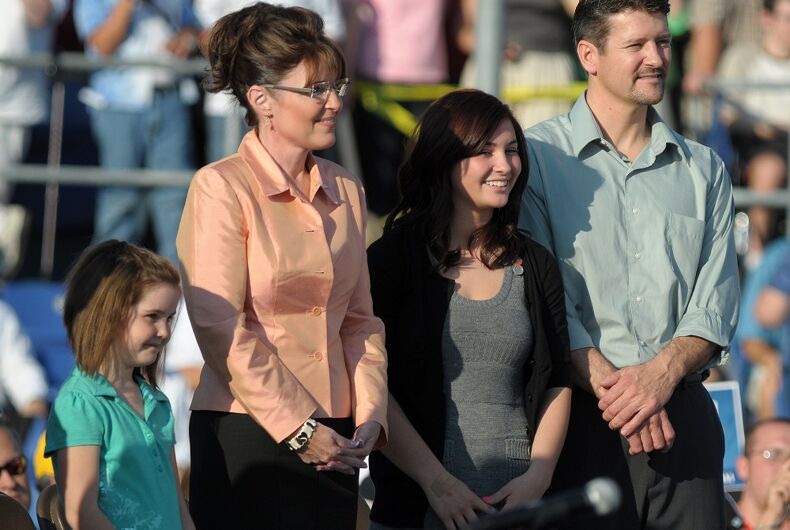 Vice Presidential candidate Sarah Palin and her family campaign in Washington, PA, August 30, 2008, with her husband Todd and two of their children.Photo: Shutterstock

Former Vice Presidential candidate Sarah Palin says she would consider a run for a seat in the Senate “if God wants me to do it.” God was unavailable for comment on whether or not he was considering it.

But, she said, Christians would have to do a better job of supporting her than they did when she ran as John McCain’s running mate.

The scandal-plagued politician was widely mocked during the campaign for being dumb and her home life was hardly upper crust. Drug abuse, domestic violence, and assault charges were all leveled at various members of the family at one point or another. Palin’s daughter Bristol became a religious right champion of chastity before getting pregnant out of wedlock.

Still, the would-be leader says God has a higher purpose for her life. Like former Congresswoman Michele Bachmann (R-MN), Palin has kept her toe in political waters while working the Christian conservative conference rounds.

Palin made her declaration at a conference sponsored by Harvest International Ministry and the Latino Coalition for Israel. Both are anti-LGBTQ groups that are part of a movement that pushes religious extremists into politics in an effort to “take over” the government.

Former Secretary of State Mike Pompeo, a religious zealot who launched multiple efforts to elevate religious beliefs over civil rights protections, spoke to the gathering. He is expected to run for President in the next election cycle.

Palin said “America was dedicated to God” and warned that “a rapid shift to the left” was going to doom the nation. The shift she opposes includes LGBTQ rights, health care, voting rights, and coronavirus prevention efforts.

“How dare we strip from our Creator what our founders had dedicated to him?” she asked. “How dare you try to take that back and change if for mankind, for some kind of secular use, secular enjoyment?”

Palin insisted that Christians would need to do a better job of supporting her candidacy if she were to run. After all, she said, taking over the government to install a Christian theocracy is the point.

“We’ve got to get out there,” she said. “We have to be the ones shaking it up. And essentially, yeah, taking over. Otherwise, what was given to God will be taken away from God.”