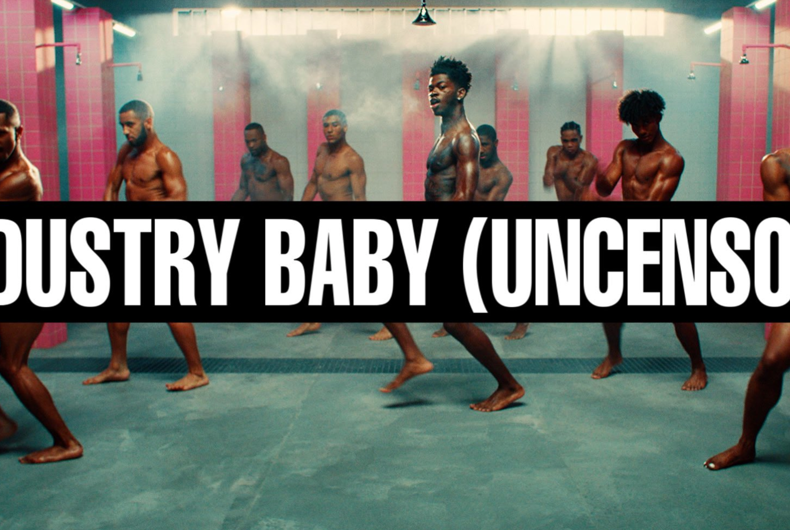 Lil Nas X dances in the shower with backup dancers in his "Industry Baby" video.Photo: Screenshot

Lil Nas X has set the internet’s loins on fire by releasing the uncensored version of his “Industry Baby” video.

The video features the rapper nude and twerking in the shower with a bunch of naked dancers and the lyric “I don’t fuck bitches/I’m queer but these n***a bitches like Madea” has become the quotable line in the song.

Lil Nas promised to release the uncensored version if one of his tweets got enough likes and he’s fulfilled his end of the bargain.

But several fans were unimpressed with what they saw, saying it was too little and decidedly not worth the hype.

The video is set in prison following the legal proceedings over his “Satan shoes,” but the cheeky joke has a serious side as well. He teamed up with the charity The Bail Project, a group that posts cash bails for people in jail awaiting trial and works to end the racist and discriminatory practice altogether.

While the rapper famously came out as his song “Old Town Road” was number one on the charts and he’s deliberately included gay themes in his songs and music videos, his critics have frequently used it to attack him.

Look I changed my router, called my internet provider, and bought a new computer but the video isn't loading properly can you PLEASE reupload the right way this time https://t.co/apnJw7FOCi

we’ve been tricked, we’ve been backstabbed and we’ve been quite possibly, bamboozled. pic.twitter.com/O2q6uiqibE

the funny thing is the only actual nudity in the entire industry baby video was a woman’s ass. not a single complaint. y’all know what y’all actually mad at lol