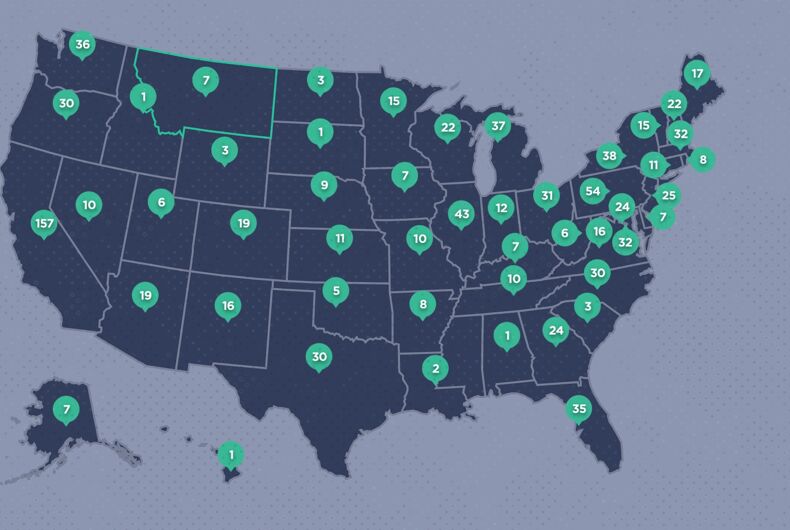 The Victory Fund tracks the number of out elected officials nationwide.Photo: Victory Fund

The number of out LGBTQ elected officials has surged over the past year, but one state lags decidedly behind.

Mississippi is the only state without a queer politician. Act surprised.

Former Rep. Barney Frank (D-MA) was the first member of Congress to voluntarily come out in 1987 after an investigation into his relationship with a male escort led by former Rep. Larry Craig (R-ID). Years later, Craig, who had become a senator, was arrested for soliciting gay sex in an airport bathroom.

In 2010, Victory Fund CEO Annise Parker was the highest-ranking local elected official when she was mayor of Houston. The city is the fourth-largest in the nation.

Now the number of out officials has grown dramatically. Lori Lightfoot – the mayor of Chicago, the nation’s third-largest city – is a lesbian. Jared Polis, a former member of Congress and now the Governor of Colorado, is a gay man; Kate Brown, the governor of Oregon, is a bisexual woman.

California has the most out elected officials with 157 identified. Pennsylvania is the next highest with 54. Illinois (43), New York (38), and Michigan (37) round out the top five.

Two governors, two United States senators, nine members of Congress, 189 state legislators and 56 mayors are currently in office according to a report from the Victory Fund. The group counts 986 total out elected officials currently serving.

The organization works to recruit LGBTQ people to run for public office and assists their campaigns.

As of 2021, 23 states have at least one transgender person in elected office.

The numbers also leave room for growth. While the organization can count almost 1000 out elected officials, for LGBTQ people to have equal representation nationwide, there should be over 28,000 LGBTQ politicians serving in office.

The selfishness of the anti-vaxxers places us all in peril