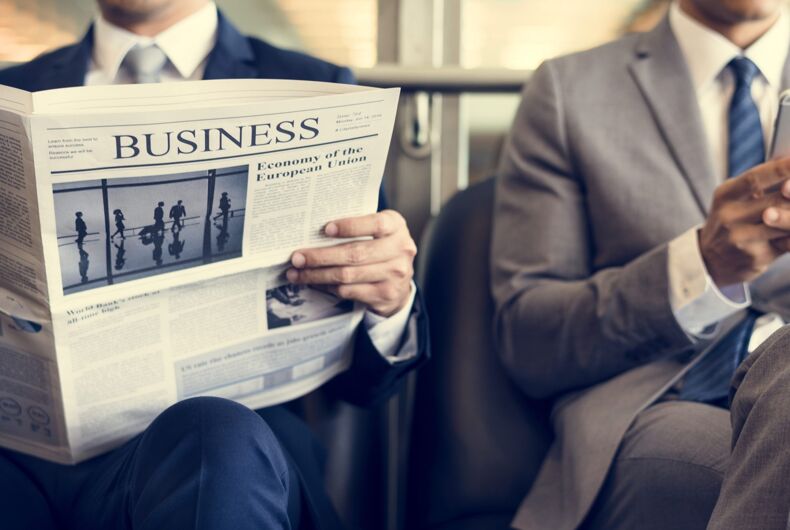 LGBTQ media organization GLAAD has for the first time issued a Media Report Card, evaluating 17 mainstream media publications based on their coverage of LGBTQ people and LGBTQ rights.

This first rendition namely focuses on the same-day reporting from February 25, which is when the Equality Act passed the U.S. House of Representatives by bipartisan vote. Based on that, most of the 17 received failing grades for “repeated dangerous & false anti-trans rhetoric.”

“LGBTQ voices cannot be left out of the coverage of the Equality Act, especially while lawmakers use their platforms to spread inaccurate information about them. We are urging the mainstream press to include LGBTQ people while covering issues important to our lives, and to recognize and call out misinformation,” GLAAD CEO and President Sarah Kate Ellis said in a statement to LGBTQ Nation.

They note that “LGBTQ beat reporters at independent, alternative, and community-focused outlets were not included, as most continue to excel at standard-setting coverage of LGBTQ issues.”

Based on their editorial reporting on February 25 (with the exception of some op-eds that were published “within one or two business days), GLAAD found that Newsweek was the “worst offender” among mainstream media.

“On the day of the House vote, Newsweek ran three articles (two opinion, one news) that focused entirely on transphobic, anti-LGBTQ views of the Equality Act,” GLAAD found. The following week, they ran another op-ed that further “contained multiple inaccurate claims.”

In alphabetical order, the other eight failing mainstream news sources by GLAAD’s determination were Bloomberg, the Boston Globe, CBS News, CNN, FOX News, The Hill, the New York Times, and the Wall Street Journal. Publications in these categories, overall, were found to have “failed to include any quotes from LGBTQ advocates” and “failed to contextualize need for Equality Act.”

In slight contrast, even FOX News included a “quote from LGBTQ Congressmember,” out Rep. David Cicilline (D-RI) who sponsored the Equality Act. Their report was contributed to by the Associated Press (AP), which received a passing grade from GLAAD separately.

In addition to the AP, the other passing publications were HuffPost, NPR, Reuters, and the Washington Post. They all included statements from LGBTQ advocates or members of Congress (which were “non-unique,” or issued in general or published on social media). Additionally, they included data that reflects that the Equality Act has bipartisan support, and did not include anti-trans rhetoric “unchecked.”

The publications that fell into the “Satisfactory/Needs Improvement” grading did include non-unique statements from LGBTQ advocates or members of Congress, but often did not include data regarding the bipartisan support of the Equality Act, and often referenced anti-trans rhetoric or opposition. These included ABC News, NBC News, and USA Today.

None of the publications, though, published unique or original statements from LGBTQ advocates or members of Congress, “including trans advocates specifically,” which would have earned them the “Outstanding” mark.

In statements to the Daily Beast, The Hill defended their reporting and said the grade was “significantly in error,” and Bloomberg pledged they already “hold ourselves accountable” internally to improve their LGBTQ reporting, pointing to their 100 percent rating in the Human Rights Campaign’s (HRC) Corporate Equality Index.

FOX News, which also has a 100 percent rating, offered no comment.

“The Equality Act is the most significant civil rights legislation for LGBTQ people and will protect every LGBTQ American from discrimination,” Ellis concluded in her statement.

“The hostile and false rhetoric used to attack the bill and LGBTQ people personally shows why The Equality Act is so needed. The press must focus on the truth about the bill and include the perspectives of those it will protect.”

GLAAD notes that it is not trying to “shame or attack” the journalists or publications featured in the report, but rather offer “suggestions, best practices, and links to helpful resources” alongside the grades.

They suggest that outlets “include Stakeholder Voices,” such as queer and trans advocacy groups and interview LGBTQ people to receive unique perspectives on how the Equality Act impacts them. Specifically including trans voices is the next suggestion. Publications should also fact-check claims about trans people, including more than lesbian and gay people and “be inclusive of the entire acronym,” and “look to the experts” in LGBTQ-specific media.

GLAAD also asks that publications “contextualize” opponents to the Equality Act, who are often from anti-LGBTQ hate groups such as the Alliance Defending Freedom. “Let readers know the difference between ‘conservative’ groups and specifically anti-LGBTQ groups,” their release implores.