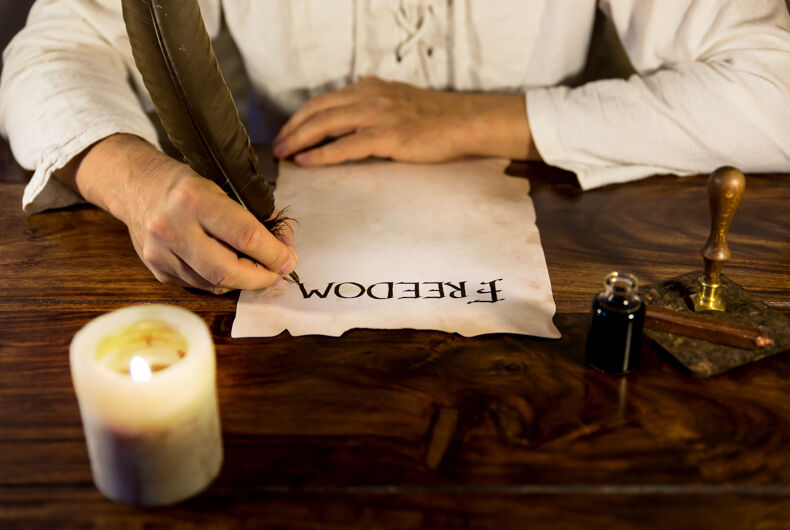 As another Fourth of July holiday comes around, it goes without saying that much has changed since the days that the Declaration of Independence was written and published 245 years ago.

Sure, it remains inarguably one of the most transformative, influential articles of writing in history. It’s also well dates, especially when you consider that it was written by people at a time when only white men were considered fully human and worthy of independence.

Related: People want to censor education for the same reasons that slaves weren’t allowed to read

So LGBTQ Nation got to thinking, if we were to create a new rendition of the Declaration of Independence — one that not only recognizes people of all backgrounds as human, but also encompasses civil rights for LGBTQ people — which LGBTQ person would we want at the table?

There have been many transformative LGBTQ writers over America’s history that could certainly find the words and the message that Thomas Jefferson, John Adams, Benjamin Franklin, Robert Livingston and Roger Sherman had intended. Writers like James Baldwin, Audre Lorde, Bayard Rustin, Walt Whitman, and even Abraham Lincoln, possibly, could possibly have done it justice, but we decided to look at writers who are currently alive and able to write it today.

The one name that came up consistently across our newsroom may be a bit surprising: Lil Nas X. But hear us out.

Remember that the writing and adopting of the Declaration of Independence was a revolutionary, unprecedented act at the time. While seeking independence from Great Britain was a growing movement, it was much less popular to actually do it. It’s also not easy to speak for hoards of people who have long gone without a voice, and represent them, and justify their entire community in one succinct way.

Lil Nas X has already done that. For many flamboyant, raunchy, daringly queer people, there has been limited representation available for them to look to. That’s especially so for Black and brown LGBTQ people — and when they have been available, historically, society has punished and ostracized them, limiting their influence or their ability to be themselves.

Many like Whitman, Baldwin, and Rustin had to come and struggle beforehand to make someone like Nas could come along and revolutionize entertainment — and very few have had the ability to do it as uniquely and extraordinarily as he has. Plus, he’s already very good at upsetting politicians who are against many of his rights, so he surely has the influence.

He’s already had experience rewriting the words of some of the influential writers of our time. Here’s his take on part of Chimamanda Ngozi Adache’s essay, “We Should All Be Feminists”:

We teach our bottoms to shrink themselves, to make themselves smaller. We say to bottoms, you can have ambition, but not too much. You should aim to be successful, but not too successful. Otherwise, you would threaten the top.

We think this excellent revision speaks for itself. It’s also not as if Nas would have to shoulder the writing responsibility alone — many others who are great with words are available to help out.

We asked our LGBTQ Nation followers on Twitter who they would suggest.

Hey friends, we have a question:

If you had to find people right now to write a new Declaration of Independence, which (living) #LGBTQ person(s) would you choose and why?

Here’s some of the other answers they shared:

@immissmajor Miss Major! If she’s not signing, then we don’t want it!

Danica Roem (@pwcdanica ) of Virginia – she is leading the way!

Pete Buttigieg because he is compassionate, fearless and brilliant.

Rachel Maddow! Why? Her superior brain! She, alone, is smarter than ALL the Faux Noise anchors/hosts combined!

And don’t worry, we’re not drafting any actual Declarations of Independence (yet — technically, we already did though), so you can come up with names from you and your LGBTQ peers so we can gather the right committee.

A Trump-loving vandal did over $16,000 in damage to a city’s new rainbow crosswalk

Pride in Pictures: My first parade with my daughter