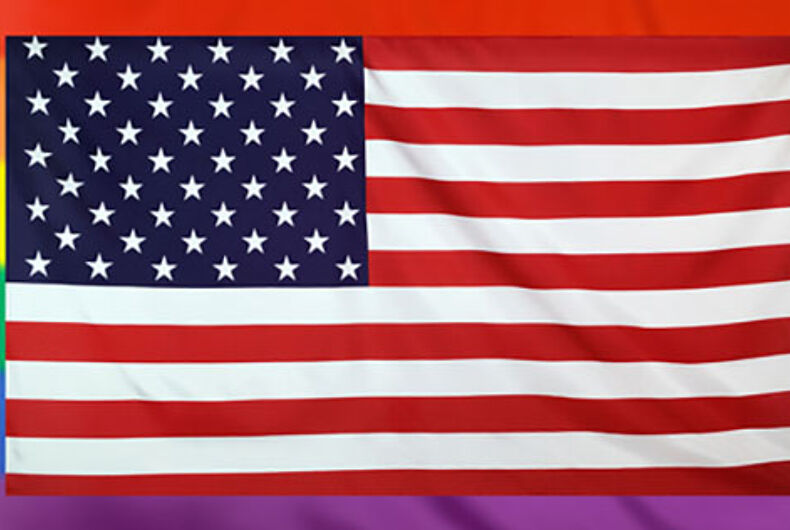 We first posted this for Independence Day in 2011, and we thought it appropriate to do it again this year. Let us continue to proclaim to the world that we will not take the denial of our rights without a fight.

A Declaration For Equal Rights

When in the course of human events, it becomes necessary for an oppressed minority to declare for themselves the full rights and responsibilities that the laws of reason, nature, and natures God entitles them, a decent respect to the opinions of mankind requires that they should declare the causes which impel them to demand as such.

We hold these truths to be self-evident, that all men and women and non-binary individuals of all sexual orientations and gender identities are created equal, and are endowed by the Creator with certain inalienable rights; that among these are Life, Liberty, and the Pursuit of Happiness; that to secure these rights governments are instituted, deriving their just powers from the consent of the governed.

That whenever any form of government becomes destructive of these ends, it is the duty of the oppressed to deny any allegiance to it, and to insist upon the establishment of a new government, one which shall be most likely to effect their safety and happiness.

Prudence, indeed, dictates that government should not be changed for light and transient causes; and accordingly all experience has shown that humans of all sexual orientations and gender identities are disposed to suffer, when such evils are sufferable, than to right themselves by abolishing the forms to which they are accustomed.

But when a long train of abuses and usurpations, pursuing invariably the same end, evinces a design to reduce them to absolute despotism, it is their duty to throw off such a government, and to provide new guards for their future security.

Such has been the patient suffering of LGBTQ people under this government, and why they now demand their equal place at the American table.

The history of humanity is a history of continued persecution on the part of the heterosexual majority over those with differing sexual orientations or gender identities, having the direct consequences of leading to a complete and utter tyranny over LGBTQ people.

Let the following facts be submitted to a candid world:

In each of these oppressions, we have appealed to the very humanity of our heterosexual brethren; for we have raised our voices and demanded countless times that we be counted, validated, and allowed to have a seat at the American table.

Yet, though there have been some who have listened and responded to our plight, the majority, despite our continued pleas for respect and equality, have turned a deaf ear; instead choosing to validate the above despotism through the force of law.

We, therefore, as equal citizens of the United States of America, demand that LGBTQ people be afforded the same rights and privileges as our heterosexual counterparts.

We will stand no longer for LGBTQ people to be the subjects of ridicule, religious and sexual or gender identity conversion, or political inequality. We demand that these walls of hatred and condemnation be torn down and be replaced instead with the bonds of equal rights, respect, and affirmation.

© Kyle Luebke. For more by Kyle Luebke, click here to visit his blog.

Florida deputy comes out as transgender: ‘I’m happy to finally be me’