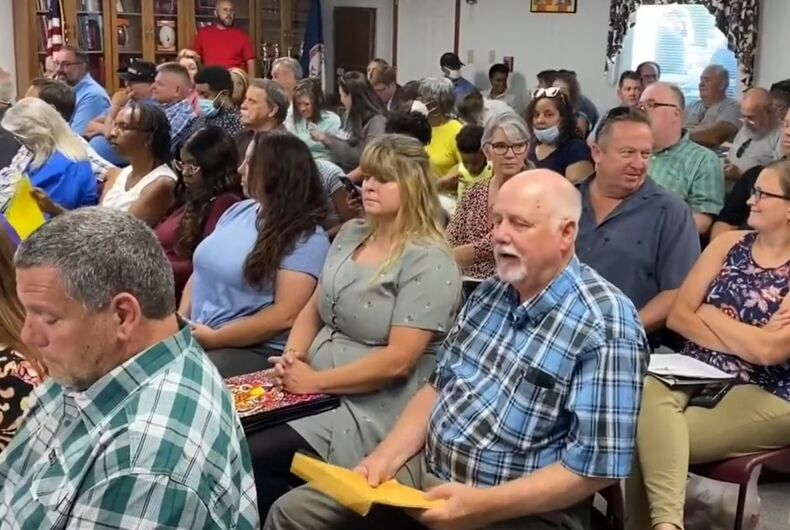 Parents packed in at the Franklin County district meeting last night to speak out against a trans policy the board wasn't considering. Photo: WSLS 10 News

School board meetings across Virginia are being disrupted by parents angry about transgender protections and what they call critical race theory.

“I think we ought to get back to our Christian morals and Christian values,” David Burrell told WHSV 3 at a Rockingham County School Board meeting Monday evening. He and hundreds of parents came to protest transgender students’ rights at the meeting, even though the district’s policy on trans students wasn’t on the meeting’s agenda.

But Rockingham County is like school districts across the state, which are now required by state law to have a plan in place to protect transgender students rights. The Virginia Department of Education was also required to put out model language for these policies.

Rockingham County’s policy states that transgender students will be able to use the facilities that align with their gender identities, which caught the attention of Burrell and other parents who went to the Rockingham County Administrative Center and held a prayer circle to pray for each member of the school board.

“I’m afraid and one of my fearful things is what this opens the door for,” he said.

“We had heard there were groups of people coming to just oppose the transgender policies that are being passed by the Virginia Department of Education and we wanted to show up to say we support these policies, we support these kids, and we believe trans rights are human rights,” said parent Ashley Saunders, who also attended the meeting.

The district said that it doesn’t have any plans to change its policy since it already had a policy for transgender students’ rights in place that meets the new state and federal requirements.

But WSLS 10 News reports that that didn’t stop 20 people at that school board meeting speaking in the “heated” debate, with most opposing transgender students’ rights.

School officials said that their policies will not lead to “co-ed” restrooms since the use of facilities is based on “a student’s consistent gender identity,” discussed in multiple meetings with guidance counselors, students, and parents. They also countered the parents’ complaints that kids will temporarily claim to have a different gender identity just to sleep with the opposite sex on school trips since that is not how their policy works.

“We’re just trying to do the best we can to take care of our children,” said Franklin County School Board Chair said Julie Nix. “I know that’s what we as a board want, it’s what the public wants. We’re all working towards the same goal, we may just have different ways to get there.”

The Staunton School Board was able to pass a policy to protect transgender students at their meeting last night, despite hours of testimony against the policy at a meeting earlier this month.

At yesterday’s meeting, the board limited public comment to 30 minutes and passed around information packets explaining that the new policies are based on model language from the Virginia Department of Education and are now required. Then the board voted unanimously for the policy that will, among other things, allow trans students to use the appropriate facilities and require employees to address them correctly.

The new policy creates additional requirements for private changing room spaces and one parent thanked the Staunton School Board for relying on science and not unfounded fears about transgender students.

“Thankfully we have that same data and statistics and science and guidance to prove to us that children are not at risk of sexual assault from other children,” said Allison Profeta at the meeting.

“First off, because women and children who are most at risk of being sexually assaulted and/or raped can readily tell you that sexual predators don’t wait for permission to enter a space in order to sexually assault someone. And second, because assuming that trans youth are somehow dangerous, is no different than 40 years ago, when gay men couldn’t be out if they worked with children for fear of losing their jobs.”

A meeting of the Warren County School Board last week wasn’t as successful, as the board voted against a new transgender student policy and did not explain their position. Parents who attended the meeting gave the board a standing ovation when the policy was rejected, according to Northern Virginia Daily.

The vote followed an hour of public comment, where people called the Democratic Party “corrupt” for requiring the school district to protect transgender students.

“To allow a boy to pretend he is a girl, then use the girls’ bathroom and locker room and play on girls’ sports teams is insanity, and not only is it insane it’s also evil,” said Mark Egger, who spoke at the meeting. “A boy who thinks he is a girl is mentally ill and needs treatment for his mental illness.”

“You’ve already adopted sufficient practices in Warren County that protect these misguided and confused children and which restroom or changing room they desire to use and I’m sick of the conservative county that we live in here, Warren County, going above and beyond our socialist so-called leaders’ – or, as I see them, dictators’ – orders and mandates,” she said. “So I ask that you guys stop the madness, stop the fearmongering and I’ve heard by several people that they are afraid that our funding will be cut, and I just say this loud and clear — our children are not for sale.”

The state government could revoke funding from the school district for not passing the policy and severely reduce the district’s budget. It is not yet known what steps they will take to enforce the policy.

These protests follow a raucous Loudoun County Public Schools meeting from several weeks ago where parents also wanted to protest both transgender student rights and critical race theory. The school district is working on a policy for trans student protections that may require teachers to address students by their correct names and pronouns, which drew ire from the crowd.

One man turned hostile and became aggressive toward a man who supported the policy protecting transgender children. After being warned by an officer repeatedly to stop and a brief struggle, he was arrested and charged with disorderly conduct and resisting arrest.

Another man faces a trespassing charge in connection with his alleged behavior at the meeting, which had to be cut short as it descended into chaos, even after officials warned protestors to “refrain from vulgarity, obscenities, profanity or other… breaches of respect for the dignity of the school board.

“These politically motivated antics ought to end,” said Loudoun County Public Schools Chair Brenda Sheridan, who said that board members have been getting death threats.

“But if they don’t, know that they won’t delay our work.”

California Republicans wanted to honor Nancy Reagan for a year. This bi Democrat wasn’t on board.