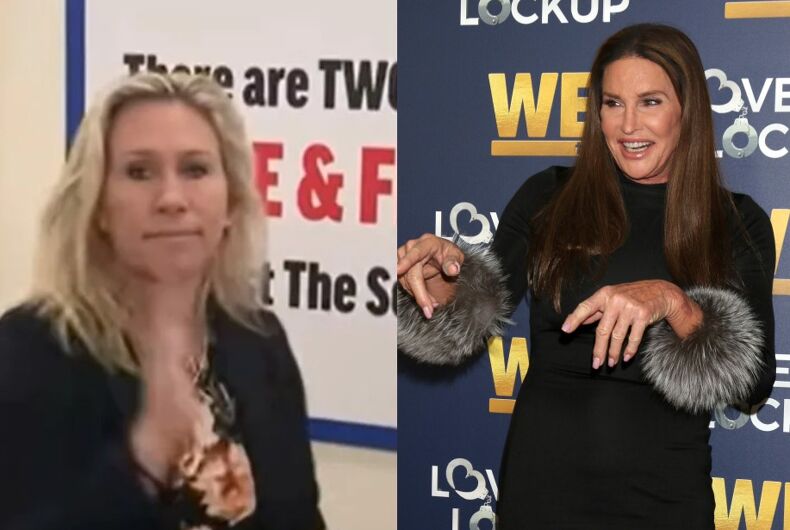 Rep. Marjorie Taylor Greene (R-GA) lashed out at Republicans who are working for Caitlyn Jenner’s California gubernatorial bid and even referred to Jenner – a longtime Republican – as a “man in a dress.”

“GOP support & consultants working to elect Jenner for Governor in CA are playing the left’s stupid identity politics game,” she wrote on Twitter, referring to a few of the big-name GOP strategists Jenner hired for her campaign. “A game that sells out our faith, family, and freedoms.”

Jenner was not part of the “Never Trump” movement – she supported Donald Trump well into his term in office.

A game that sells out our faith, family, and freedoms.

Stop promoting this man in a dress & NEVER-Trumper.

Since Greene was elected last year, she has made a name for herself as one of the most eccentric and conservative members of the House. She even lost her committee assignments due to her support for violent conspiracy theories.

But opposition to LGBTQ rights has long been her bread and butter. She was first drawn into political activism when she started protesting Drag Queen Story Hours in her community in Georgia, and she still considers teaching children that LGBTQ people exist “mental/emotional child abuse.”

She called the Equality Act – which would include LGBTQ people in federal civil rights legislation – “DISGUSTING, IMMORAL, AND EVIL.” She tried to shut down the House of Representatives multiple times when it was considering the bill, calling the gay, Jewish Rep. David Cicilline (D-RI) “Rep. Mussolini” when he tried to stop her.

Greene even put a sign in front of her office at the Capitol that reads: “There are TWO genders: MALE & FEMALE. ‘Trust The Science!’”

Jenner, who is best known as an Olympic gold medalist and a reality television star, announced earlier this year that she is running to be governor of California in a recall election to unseat Gov. Gavin Newsom (D). She has no experience in politics, and her campaign has been a series of gaffes.

She told Sean Hannity that the reason she’s running is that a man with an airplane hangar near hers in Malibu was tired of seeing homeless people in California and was moving to Arizona.

“My hangar… the guy right across, he was packing up his hangar and I said, ‘Where are you going?’ And he says, ‘I’m moving to Sedona, Arizona, I can’t take it anymore. I can’t walk down the streets and see the homeless,’” she said.

Jenner was later caught lying when she said she didn’t vote in the 2020 elections because she was too busy golfing. She actually did vote in that election, according to Los Angeles County records.

Her campaign has left analysts wondering who exactly is her constituency is as a wealthy, conservative transgender woman in a year when Republicans started a war on transgender people’s rights, making it one of the central issues that defines the GOP this year.