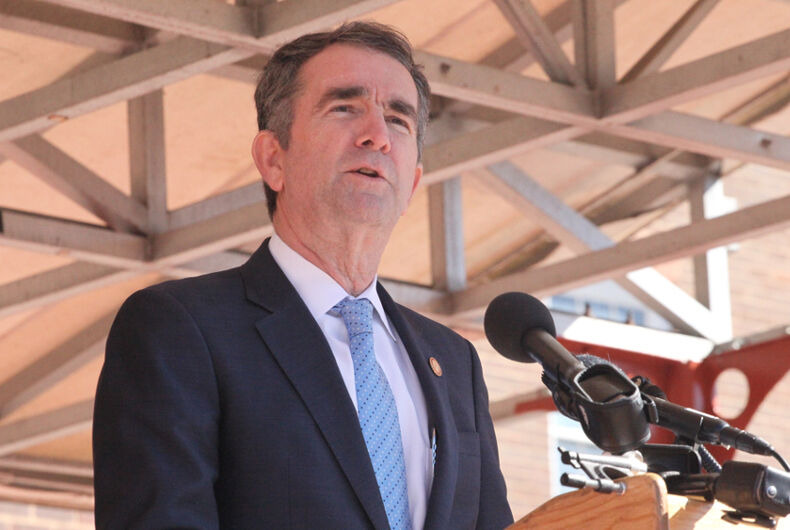 The laws protect transgender youth in schools, pave the way for additional LGBTQ anti-discrimination protections, and also expand the definition of hate crimes to include sexual orientation and gender identity.

House Bill 145 and Senate Bill 161, sponsored by Delegate Marcus Simon (D) and state Sen. Jennifer Boysko (D) respectively, state that the Department of Education is required “to develop and make available to each school board, no later than December 31, 2020, model policies concerning the treatment of transgender students in public elementary and secondary schools that address common issues regarding transgender students.”

In a statement on the law, Gov. Northam said, “In Virginia, we fully expect our schools to treat all students with the dignity and respect they deserve. This bill represents an important step towards making Virginia more welcoming and inclusive. I’m grateful to Sen. Boysko and Delegate Simon for carrying this legislation, and I’m pleased to sign it.”

Northam also signed House Bill 696, which states that “localities may prohibit discrimination in housing, employment, public accommodations, credit, and education on the basis of sexual orientation and gender identity.” The bill was sponsored by Delegate Danica Roem (D), the first out transgender person to be elected (and re-elected) to the Virginia General Assembly.

“No matter where in the commonwealth you live, you should be free from discrimination,” said Roem, according to the Washington Blade. “Allowing localities to include sexual orientation and gender identity in their nondiscrimination policies means they can make a statement of affirmation about their values at the local level while we continue to make Virginia a more inclusive commonwealth statewide.”

And finally, House Bill 276, sponsored by Delegate Rip Sullivan (D), expanded the definition of a hate crime to include criminal acts committed based on the victim’s gender, gender identity, sexual orientation, or disability.

“Over the last few years, we have watched as the number of hate crimes here and across the country continues to increase,” said Delegate Sullivan, according to Blue Virginia. “We can — and will — rise above this hatred by enacting legislation that reflects who we are as a Commonwealth.”

The momentous day when these bills became law arrived only a few days after Virginia also became the first southern state to ban conversion therapy for minors. This wave of pro-LGBTQ legislation is a result of Virginia’s newly Democratic-controlled state legislature. It is the first time in 26 years that Democrats have been in control.