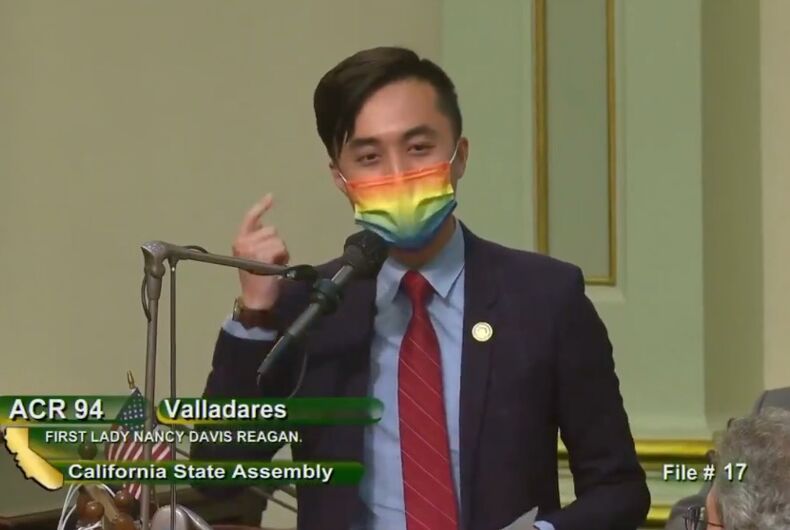 California Republicans introduced a measure to honor former First Lady Nancy Reagan’s centennial birthday for an entire year. The feel-good measure would lionize Reagan and wallpaper over her glaring flaws.

Out Assemblyman Alex Lee (D) wasn’t on board with the measure and in a short blistering speech given before his colleagues voted, Lee let them know exactly why.

“Republicans want to honor an entire year after Nancy Reagan. Completely absurd to praise someone who escalated the war on drugs & let the AIDS crisis ravage the LGBTQ+ community. Reagans deserve no commemoration,” Lee tweeted with a video of his speech. “I told the Assembly ‘Just say NO’.”

Lee went through the litany of offenses Reagan committed against people of color and the LGBTQ community.

“Nancy Reagan, of the great many things she did in her life, we have to recognize the consequences of her actions… things like advocating against the equal rights amendment… and the detrimental role she and President (Ronald) Reagan played in the AIDS crisis that ravaged our LGBTQ community in the 80s,” Lee said.

Then-presidential candidate Hillary Clinton apologized after gay-rights and AIDS activists assailed her for saying Nancy Reagan helped start a “national conversation” about AIDS in the 1980s, when protesters were struggling to get more federal help in fighting the disease.

Soon after the interview aired, MSNBC’s Twitter feed was flooded with comments accusing Clinton of misrepresenting history and insulting the 1980s activists who pressured elected officials to step up the response to AIDS. Clinton soon apologized.

“While the Reagans were strong advocates for stem cell research and finding a cure for Alzheimer’s disease, I misspoke about their record on HIV and AIDS. For that, I am sorry,” Clinton said on her Twitter account.

Many activists remain bitter at former President Ronald Reagan and his administration for what they view as a devastatingly slow response to AIDS. Though initial reports of the disease surfaced in 1981, President Reagan did not make his first public speech about it until 1987, by which time it had killed more than 20,000 Americans.

Comedian John Oliver shot back at Clinton at the time, noting, “The fact Hillary Clinton didn’t know that is a little weird. It’s strange to forget something so fundamental about a person. It’s like forgetting Cookie Monster’s thoughts on cookies or Sir Mix A Lot’s opinions on big butts. A president is supposed to know this stuff.”

Members passed the resolution on a 48-5 vote.

Republicans want to honor an entire year after Nancy Reagan. Completely absurd to praise someone who escalated the war on drugs & let the AIDS crisis ravage the LGBTQ+ community. Reagans deserve no commemoration

I told the Assembly “Just say NO” pic.twitter.com/SvmXdwmUbM

Editor’s Note: This article has been corrected to reflect that Assemblyman Lee identifies as bisexual and not gay.

Are Black churches beginning to reckon with their embrace of homophobia?