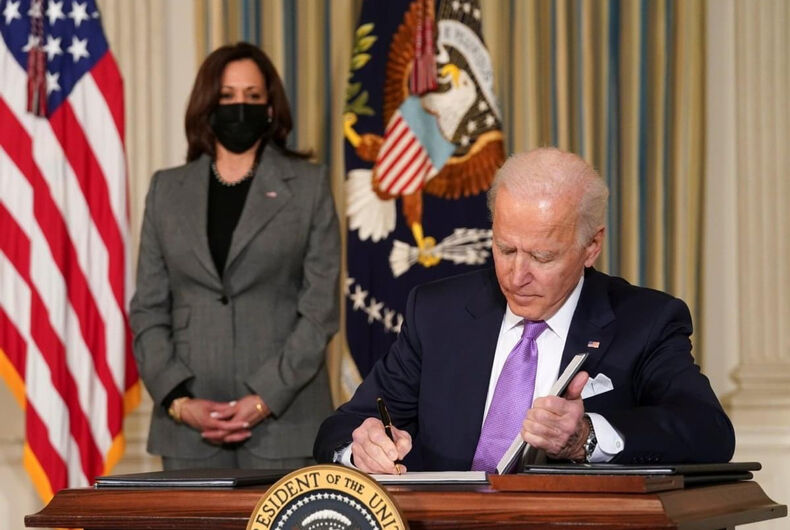 The attorney general of Tennessee penned a letter — signed by twenty other states’ Republican attorney generals  — that formally objects to an executive order by President Joe Biden on his first day in office that extended federal anti-discrimination protections to sexual orientation and gender identity.

The attorneys general claim that the Department of Education (DOE) and Equal Employment Opportunity Commission (EEOC) have “misconstrued federal law and failed to adhere to the transparency and deliberative process” by following Biden’s directive.

The signatories further claim that “the States and other affected institutions and individuals have been excluded from any discussion” by the administration, alleging that it’s against the law to enforce federal agency rules in states that are refusing to implement such anti-discrimination protections.

The Executive Order fully implements the ruling made by the Supreme Court in Bostock v. Clayton County in June 2020, which held the ban on job discrimination “because of sex” in Title VII of the Civil Rights Act of 1964 also bans discrimination against LGBTQ people, since anti-LGBTQ discrimination is inherently based on sex.

Since the ruling only directly applied to Title VII, the Trump administration refused to apply it to other civil rights laws even though the reasoning is the same. The Biden administration did, and Biden issued this order on January 20 saying that the ruling’s reasoning applies to laws like Title IX of the Education Amendments of 1972, the Fair Housing Act, and section 412 of the Immigration and Nationality Act just hours after he was inaugurated.

“All persons should receive equal treatment under the law, no matter their gender identity or sexual orientation,” Biden’s executive order states in the introduction.

The actions that the DOE and EEOC have taken to enforce these rules against discrimination since are at issue. The attorneys general claim that the Biden administration is “threaten[ing] to impose unlawful regulatory guidance upon nearly every employer and educational facility in our states and throughout the country.”

They also claim that the EEOC is illegally forcing people to use the correct pronouns for trans people, even though, they claim, “Bostock did not provide any basis for a claim that using biologically accurate pronouns could violate the law.” They argue that repeatedly misgendering trans employees isn’t a form of illegal discrimination, it’s actually “protected speech.”

The signatories claim the action by the current administration “harms the rule of law and undermines the legitimacy” of the federal government. They say the rules protecting LGBTQ people “serve only to sow confusion among regulated entities — including the employers and schools that operate in our communities.”

They hope that they will be bought in to “discuss” the rules, concluding, “We look forward to working with you to resolve these matters and appreciate your attention to the concerns presented here.”

The White House has not yet issued a comment on the letter.