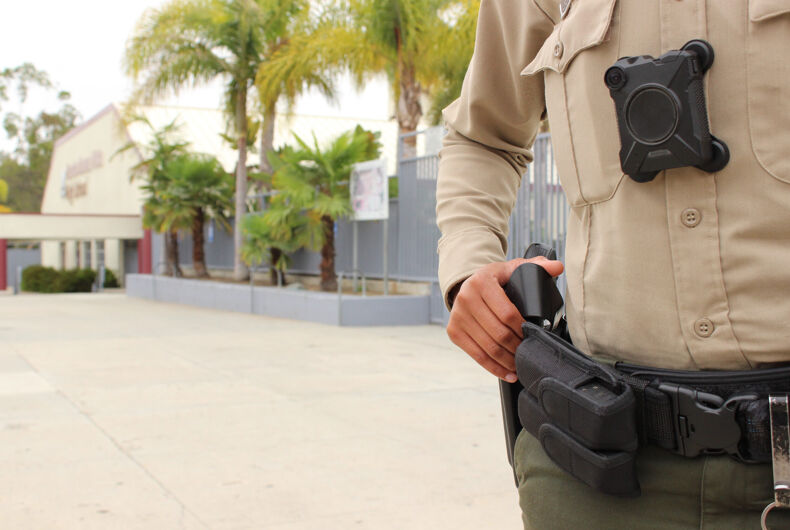 A teacher in California alleges that after he began reporting homophobic behavior to school administrators and a school-based police officer, he’s faced threats, suffered health issues, and feared for his safety.

Once learning about the allegation, the officer in question allegedly showed up to the teacher’s home one night with at least one other police officer. He demanded the teacher follow his directions, allegedly gesturing to his firearm while doing so. The teacher only escaped the overnight confrontation when his husband came outside to figure out what was happening.

Related: Man accuses Lowe’s of ignoring “some of the most egregious harassment one can imagine”

The teacher, David Cole, has now filed a lawsuit in the U.S. District Court in Eastern California. He is suing the city of Ceres, Ceres’s police department, officer Lorenzo Beltran, and several unnamed individuals in federal court.

He has demanded a jury trial where his legal team will seek to prove that the defendants have violated his civil and constitutional rights. The trial is set to proceed beginning in December 2022.

According to the Modesto Bee, Ceres city officials are denying Cole’s allegations and defending the officer’s actions when he showed up at Cole’s home.

Cole and his husband and partner of 30 years, Christopher Moon Cole-Tran, moved to Ceres in 2017 knowing it was “conservative,” although Cole’s lawsuit says, “Nothing could have prepared them for the level of homophobia, intimidation and discrimination they would face.”

On February 13, 2019, Cole had reported to his supervisors at Central Valley High School about homophobia and sex discrimination being permitted at the school. At the time, according to the lawsuit, the school was “riddled with and failing to address the chronic problems of homophobia and bullying.”

Cole had previously made complaints to administrators and Beltran, the school resource officer, employed by the Ceres Police Department and stationed at Central Valley. In Cole’s view, Beltran was one of the officials failing to do anything to stop the “chronic problems of homophobia and bullying.”

His lawsuit reads, “Mr. Cole was deeply troubled by the lack of prevention efforts and concerns for the safety of the gay and lesbian students by the school, its staffing, and its SRO – and he was vocal about that.”

This complaint was made right before a break where the school was closed, and Cole, a special education teacher, was leaving work after “an unrelated incident” with a different student.

“Prior to and after leaving the campus, he conveyed to the administration that he was deeply concerned that nothing was being done to address the homophobia and discrimination that occurred the week prior,” Cole’s lawsuit reads, “involving the disabled young student at the hands of another, as he believed that student’s civil rights had been violated and that the incident was being ignored.”

Just two days later, Cole was home on a Friday night when someone knocked on his door in his gated community which “startled” his husband, Christopher. He opened the door to find Beltran and another uniformed officer, who “ordered Cole to exit the house, escorted Cole to an area in front of the house and began aggressively questioning him about the incidents at the school involving homophobia… and the reports and complaints that Cole had made to the school administration.”

This led Beltran to start “screaming at Cole that he was not fit to be a teacher,” which was based on Cole’s sexual orientation, according to the lawsuit.

“During the encounter, and as a further act of intimidation and a threat, Beltran was flashing his weapon and he made repeated gestures toward his gun while insisting Mr. Cole come with them to the school,” the lawsuit continues.

If Cole did not commit to quitting his job, he was expected to “accompany Beltran and this unidentified second man, both of whom were armed and acting in an intimidating and aggressive manner, to the school grounds,” even though Cole knew “the school was closed and the campus was void of both students and administrators.”

Cole feared that the directive was made by Beltran and his fellow officer “in order to physically assault him and possibly kill him and his partner.”

Beltran kept telling Cole to get into his car, and Cole repeatedly refused. The lawsuit alleges that Christopher, from inside, heard the entire ordeal and also feared for his life, but “Mr. Cole’s pleas and the fear in his voice” led him to “open the door and interrupt the encounter.”

Cole ran back into his apartment, unsure if Beltran and the officer would follow. The officers eventually left and, based on the lawsuit, did not make any attempts to enter the couple’s home.

“The two men now fear the police more than the harm that any third party could cause them,” the suit alleges, noting that they are “considering leaving their home and Ceres in order to escape their fear.”

Ceres officials claim that Beltran’s visit to Cole’s home was a “welfare check” that was requested by the school because Cole had missed mandatory meetings. In response to the lawsuit, the city told the court that Beltran simply requested Cole to contact the school in a “short conversation,” the Bee reports.

Cole was on administrative leave due to the incident, according to Cole’s lawyer Julien Swanson. He remained suspended until June 2019, when he was summarily fired by the Ceres Unified School District.

He was escorted off campus with his belongings, and an administrator suggested his sexual orientation was the reason he didn’t fit at the school, telling him that San Francisco or Los Angeles, two cities with notably large LGBTQ populations, may “be a better fit.”

As for the city and police officials, he accuses them of violating his First Amendment right to freedom of speech and his Fourth Amendment right against unreasonable seizure. His lawsuit adds 100 “Doe” individuals, including the unnamed police officer that accompanied Beltran and any others who were “responsible in some manner for the events.”

Cole blames the incident and their actions for affecting his health, leading to aches, a gastrointestinal disorder, and insomnia. He alleges he has lost about 75 pounds since the incident.

“Now we’re scared to even be who we are,” Cole said, noting he went from “starting Rainbow Generation, the first queer club in the Central Valley at a school” in college in the 1990s, “to being terrified and not wanting the police to know it’s me or know that I’m gay.

“That’s where I’m at: just terrified of being outside in Ceres and at home.”

Cole seeks punitive and exemplary damages against Beltran and the officers that took part or allowed the alleged treatment “in an amount sufficient to deter and to make an example of them.” He also seeks damages from all defendants, including the city, as “a result of the intimidation, restriction of liberty, and emotional anguish and trauma he suffered.”