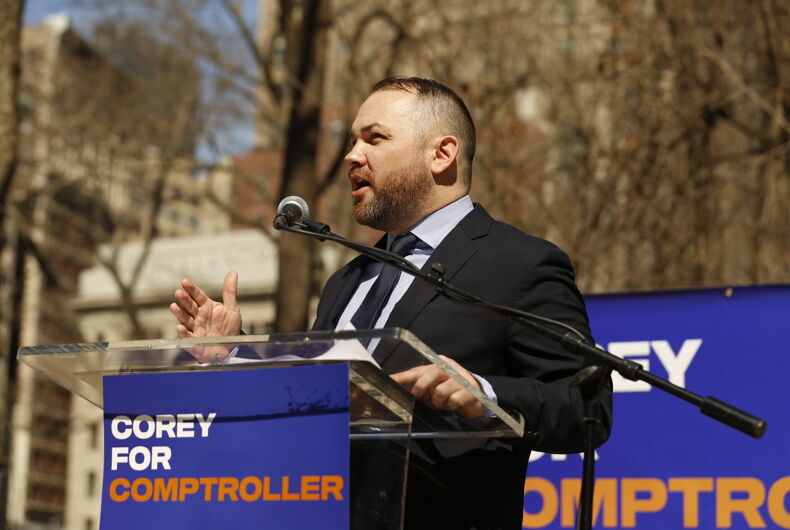 Comptroller is a crucial government role that includes overseeing the city’s budget, auditing spending by city agencies, managing city pension funds, and other duties related to the city’s fiscal health.

Related: Brian Sims believes in bipartisanship, but not more than he believes in equality

“I was leading the body during the toughest days of the pandemic,” Johnson told LGBTQ Nation, “and I decided to run for comptroller because it is probably the most important job that people aren’t paying attention to as it relates to New York City’s recovery and future.”

I'm running to be the next Comptroller of New York City and I have one mission: to better the lives of New Yorkers. pic.twitter.com/SFQTFGHMiO

Johnson is a well-known figure in New York. Famous for his singing, dancing, and unabashed LGBTQ pride, New York Magazine called him “The Man Who is Glitterbombing New York City Politics.”

He is one of eight Democrats competing in the June 22 primary and believes his experience as Speaker uniquely qualifies him for the role.

“As Speaker, I’ve had to negotiate three 90-billion-dollar budgets,” he said, “so I know the city’s finances inside and out, and I want to be able to be of service to the city that I love and make sure we recover in a just and equitable way.”

“I’ve done real oversight over city agencies,” he continued, “which is another important aspect of the comptroller’s position.”

His priority, he said, is to ensure New York City’s pandemic recovery is focused on the communities most affected by it, from people of color to small businesses to single moms.

“We have to have those folks at the top of our mind,” he said, “and we have to make sure that this recovery works for them.”

He also emphasized the importance of wisely appropriating the funds New York City is receiving from President Biden’s American Rescue Plan. As part of his platform, Johnson has promised to create a publicly searchable COVID-19 Relief Dashboard to track city spending of federal aid.

“We’re getting almost 6 billion dollars in unrestricted local aid from the feds, and we have to make sure we are prudent and strategic and careful about how we spend that money,” he said. “Part of this job is going to be making recommendations on how money can be saved [to help with future deficits], which programs are most effective, and how do we use that aid to get New York City’s recovery kickstarted.”

Honored to spend some time in the Bronx this morning, distributing food to New Yorkers in need.

Thanks to Councilman @Salamancajr80 for organizing this important event. pic.twitter.com/Y1ox9gDPG9

One big issue of concern to New Yorkers: the budget for the NYPD. According to Gotham Gazette, Johnson has not publicly stated what he believes to be the proper budget size for the city’s police department.

In 2020, amid protests to “Defund the Police,” Johnson did express support for a $1 billion budget cut to the NYPD, though activists criticized the City Council for falling short when the budget was released. At the time, Johnson said he, too, was “disappointed,” and that the shortcomings were in part due to the need to compromise with Mayor De Blasio.

Johnson told LGBTQ Nation that when it comes to the future budget of the NYPD, he plans “to listen to my African American and Latino colleagues. That’s what I did last year. I listened to the members of color inside the Council and I’m going to do the same thing this year. To me, a moment and movement of Black Lives Matter means listening to those people inside of your life.”

In addition to being known for his politics, Johnson has also built a reputation for being extremely open about his personal life. He has spoken publicly about being HIV positive, as well as being 12 years sober after drug and alcohol addiction. He also cited his battle with depression as the reason he dropped out of the 2021 New York City mayoral race.

“I think it’s important for one’s own well-being to be honest and not have shame,” he said. “That’s the healthiest thing to do, and a good byproduct of that is that it hopefully destigmatizes these issues and helps people.”

If you’re struggling. You’re not alone. Get the help you need. You’re worth it. Sending love to NYC. 💜

Johnson has been working to destigmatize his sexuality since he was just a teenager. He came out at 16 years old while living in a small town north of Boston, after having just been elected co-captain of his high school football team.

He was the only out gay person at his school and decided to use his experience to help others. Through a Massachusetts Department of Education program, Johnson traveled to schools across the state to talk about coming out.

When he was barely 18, his coming out story ended up on the front page of the New York Times. In 2000, he was also interviewed by Anderson Cooper for 20/20, which led to him traveling across the country for more speaking engagements. Those experiences, he said, led him to get involved in activism and politics.

Above all else, Johnson wants voters to know that he brings heart to whatever job he does.

A DC gay bar apologized after security dragged a Black woman down stairs. That’s not enough.