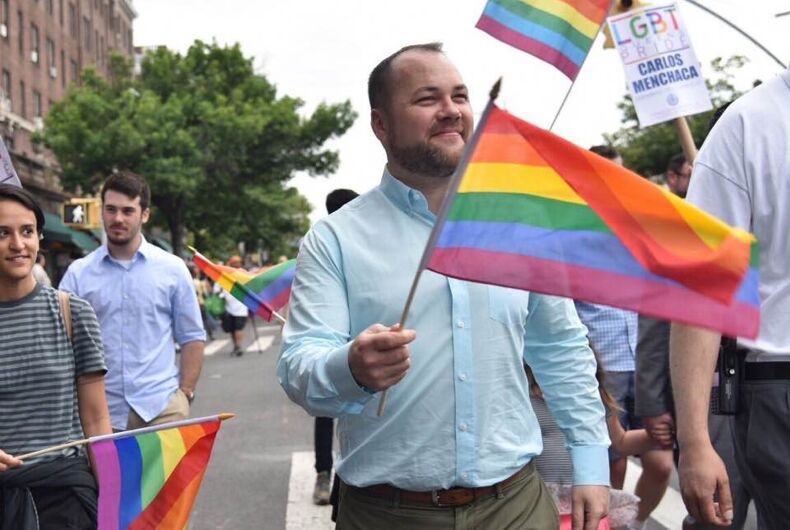 Corey Johnson, the out gay Speaker of the New York City Council, has ended his campaign for mayor, with colleagues saying he has been withdrawn since a bitter battle over police funding.

Johnson publicly cited his battle with depression as a reason for not running, hoping that publicly discussing the issue would help fight the “secrecy and stigmas” that make people with mental health conditions “feel alone.”

New York City Mayor Bill de Blasio (D) can’t run for reelection again, and numerous candidates from both parties have either declared their candidacy or announced their intention to run in the 2021 election.

Johnson, who rose to one of the most prominent positions in the city government when he was just 35-years-old, was considered a strong candidate.

“Today I’m announcing that I have made the difficult decision not to run,” he wrote in an email to supporters. “This challenging time has led me to rethink how I can best be of service to this city, and I have come to the conclusion that this is not the right path for me.”

“I would also add that I have been dealing with some personal challenges over the past few months, namely – depression.”

Johnson wrote that he has always wanted to be open with his supporters about the challenges he faces in his personal life.

“I’ve been open about my sobriety, which along with my partner and mother, has been instrumental to me during this difficult time, and my HIV status,” he wrote. “I believe it’s important to be open about this as well.”

“Too often mental health issues are shrouded in secrecy and stigmas, which causes people struggling with these issues to feel alone. I encourage anyone who is experiencing a mental health condition to seek help. I did and I am better for it.”

His decision may have been driven in part by controversies over funding for police in New York. This past July, the city passed its fiscal year 2021 budget which included a $1 billion cut to the NYPD’s budget in the face of the city’s $9 billion budget shortfall due largely to the COVID pandemic.

Conservatives criticized the budget for “betraying New York’s finest” while the left said that the budget cuts weren’t deep enough. The controversy even led to Johnson’s boyfriend’s home being vandalized by a protestor.

Despite getting attention on social media for years for dancing at Pride and engaging with the public, Johnson has largely stayed out of public view since the budget battle. Those close to him said that he just hasn’t been the same.

“I don’t know if he wants to be speaker,” one Council member told the New York Daily News. “The current marching orders are, ‘Let’s do small things that no one cares about. We’re not taking on any big fights.’”

Johnson said that he is continuing in his role as Speaker.

If he had won the election, Johnson would have been the first gay mayor of the largest city in the U.S. Out former Speaker of the New York City Council Christine Quinn ran in the 2013 Democratic primary to be New York City’s mayor but lost to de Blasio, getting only 15.5% of the vote.

Republican Sen. Lindsey Graham is begging for help because “they hate my guts”