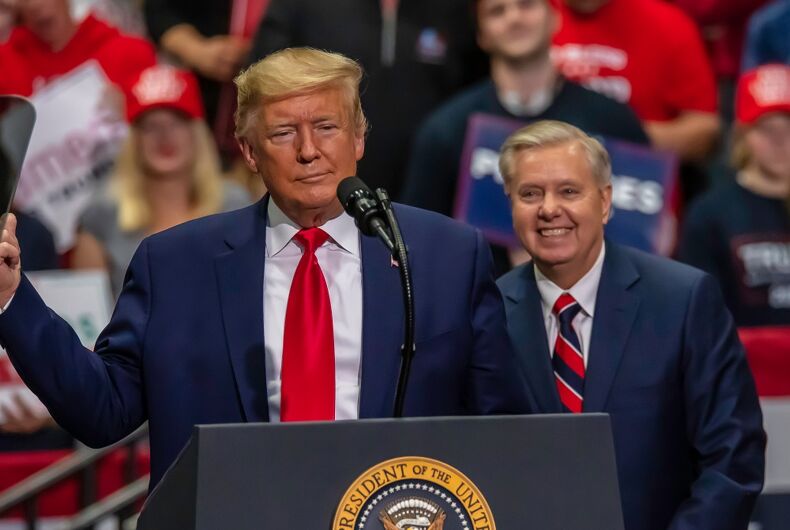 The staunchly anti-LGBTQ Sen. Lindsey Graham (R-SC) pleaded for cash on television yesterday, saying that his Democratic opponent is raising more money than him because people “hate my guts.”

Graham is running for reelection this year in a very tight race against Jaime Harrison and has faced staunch criticism this past week because of comments he made about the late Justice Ruth Bader Ginsburg.

“My opponent will raise $100 million in the state of South Carolina,” Graham said on Fox News. “The most money ever spent in the history of the state on a Senate race in this state was by me in 2014 when I spent $13 million.”

He went on to say that Harrison has raised $6 million in the first three days after Ginsburg passed away.

“But I am being killed financially. This money is because they hate my guts.”

The Hill reported that his numbers can’t be confirmed. In their campaigns’ most recent Federal Election Commission filings, Graham actually had the cash advantage in the race, but the numbers are from June and a lot may have changed since then.

In 2016, Senate Republicans refused to even allow a vote on Barack Obama’s Supreme Court nominee Merrick Garland, claiming that a president did not have a right to name a Supreme Court justice in an election year.

“I want you to use my words against me,” Graham said at the time in a Senate hearing. “If there’s a Republican president in 2016 and a vacancy occurs in the last year of the first term, you can say Lindsey Graham said let’s let the next president, whoever it might be, make that nomination.”

“I want you to use my words against me. If there’s a Republican president in 2016 and a vacancy occurs in the last year of the first term, you can say Lindsey Graham said let’s let the next president, whoever it might be, make that nomination." pic.twitter.com/quD1K5j9pz

That exact situation has occurred – a Republican became president following the 2016 election and there is a Supreme Court vacancy in the last year of his first term.

But Graham made it clear that his words no longer apply. Less than 24 hours after Ginsburg passed away, Graham had already said he would support Trump’s Supreme Court nominee.

Graham first won his seat in the Senate in 2002, replacing the unrepentant segregationist Strom Thurmond.

He has repeatedly earned low scores on HRC’s Congressional Scorecard due to his opposition to LGBTQ equality. He even supported a constitutional amendment banning marriage equality because, he said, “a handful of liberal judges” want to “change the definition of marriage,” which he called “terrible.”

Now he’s in a tight reelection campaign. A Morning Consult poll found that 46% of likely voters say they’ll vote for him while 45% said they’re planning to vote for Harrison, and a Quinnipiac poll from last week found Graham and Harrison had 48% support among likely voters.

With Trump expected to name a Supreme Court nominee on Saturday and the ensuing Senate debate, those numbers could move significantly before the election in November.

Cops shot a Black trans woman in distress 16 times. The DA says it was her own fault.