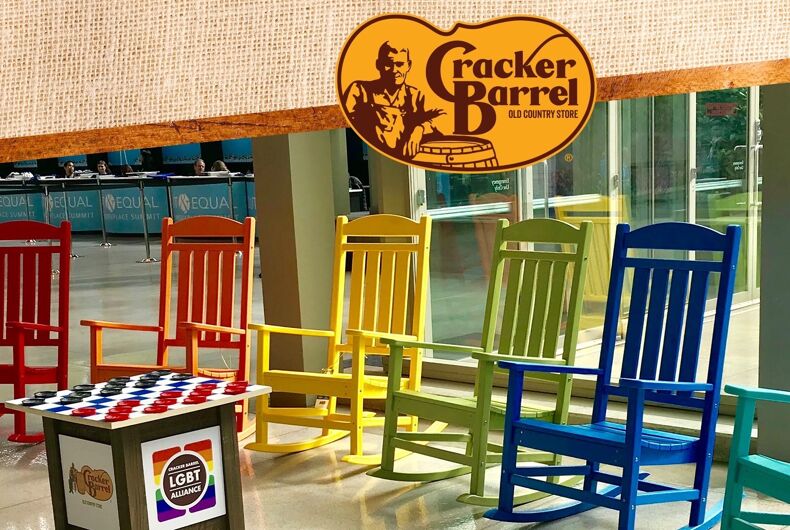 More companies and brands are “celebrating” Pride Month with customers than ever and we’re well over the tipping point. Even brands that generally cater to a more conservative audience are starting to jump on the rainbow train.

And with companies like Cracker Barrel, TruTV, and CMT (Country Music Television) joining in this year, conservatives are in an uproar.

TBS, TNT, and TruTV joined forces with our sister site, Gaycities, to promote our parent company’s initiative with GoFundMe to support inclusive spaces for the LGBTQ community. Q.Digital also owns INTO and Queerty.

Comments on the video decried the station for turning “woke” and ignoring “conservative principles.”

“These comments are proving why pride is important,” one user left. “Sickening how so many people are still homophobic in this day and age.”

Even Cracker Barrel, the restaurant that had a formal policy that allowed managers to fire gay and lesbian employees with impunity, has joined in this year.

“At Cracker Barrel Old Country Store, we’ve been on a journey of improvement and understanding, as individuals and as a company,” the restaurant chain wrote on Facebook with a picture of 6 rainbow-colored rocking chairs.

“We believe that when we harness the uniqueness of our differences, we become better. A Cracker Barrel dining room is a place where people of all ages, races, genders, ethnicities, walks of life, political preferences, and sexual orientations can come together and feel at home.”

While the colors on the chairs didn’t quite add up to a pride flag rainbow, the dramatic turnaround impressed a lot of people.

“I’ve driven past Cracker Barrel locations now for 30 years, ever since the company fired Cheryl Summerville in Douglasville, Ga. in 1991 via a letter stating ‘The employee is being terminated due to violation of company policy. The employee is gay.’ The company’s new diversity and inclusion initiatives are most welcome and should be applauded,” Richard Eldredge responded.

“Alas, many of the hate-filled comments on this post aptly demonstrate why this new corporate policy is so necessary and illustrate precisely how much work remains to be done.”

CMT’s rainbow-themed logo also didn’t sit well with conservative viewers – and they were a little more strident in their objections than the other two companies’ fans as they moaned about the decline of “traditional southern and christian values.”

But even there, the positive comments shone through and several were as critical of the conservatives as the homophobes were of CMT.

“For everyone hating, you can delete your Facebook because they support it too,” Ben Brady responded. “Bye.”

Several queer country fans proved why the channel had shown their support. The genre hasn’t been the most welcoming to LGBTQ fans and performers.

“Thank you, CMT! You CAN love Country Music and support equality and human rights! We all need to stand up for equality, until the ones who are still sitting are the ones who stand out,” one person responded, using the hashtags #loveislove and #pridemonth.

Out NYC Council Speaker Corey Johnson is running for Comptroller. Here’s what that means.