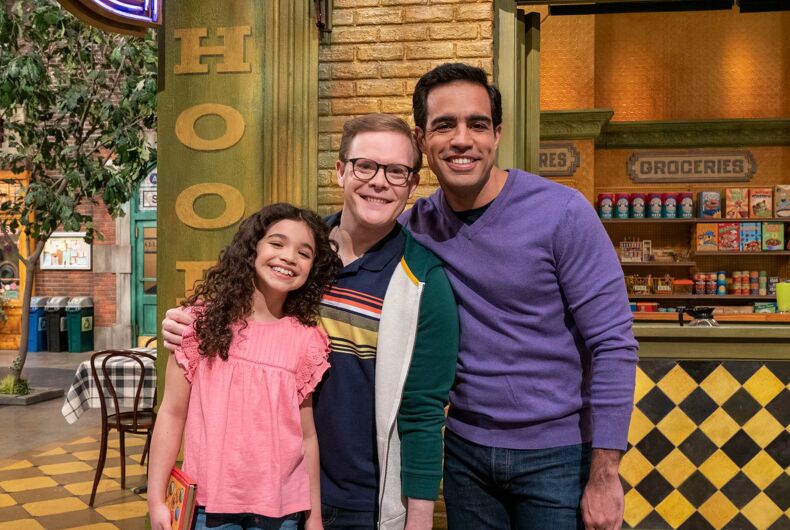 Dave, his husband Frank, and their daughter Mia are being welcomed to Sesame Street.Photo: Sesame Workshop / Richard Termine

“Sesame Street has always been a welcoming place of diversity and inclusion,” Alan Muraoka, who plays Alan, posted on Facebook. “So I’m so excited to introduce Nina’s brother Dave, his husband Frank, and their daughter Mia to our sunny street.”

Muraoka directed the episode that focuses on “Family Day.” The story focuses on Big Bird, who thinks his Granny Bird can’t make the big celebratory party before he’s surprised by his neighborhood family.

“I am so honored and humbled to have co-directed this important and milestone episode. Love is love, and we are so happy to add this special family to our Sesame family. Happy Pride to all!!!!”

In 2002, Takalani Sesame, the South African version of Sesame Street, introduced Kami, the show’s first-ever HIV-positive muppet. Kami is five-years-old, seroconverted by blood transfusion and mostly talks about HIV and the importance of staying in school.

While her creators quickly caved to Republican fears and promised that she’d never appear in the U.S. where HIV disproportionately affects non-white, gay and bi men and trans people, her mere existence at least hinted at the show’s desire to get into potentially touchy territory.