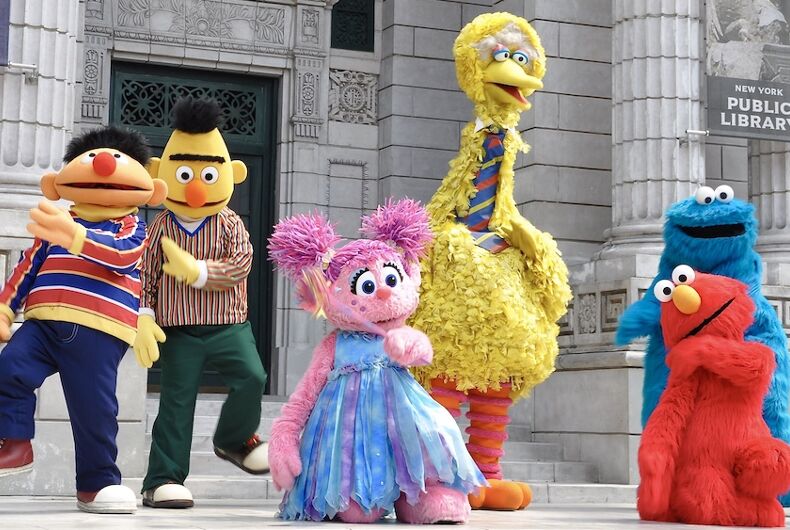 On Thursday evening, the social media channels of the long-running PBS educational children’s show Sesame Street posted a message in support of Pride Month. The rainbow-colored image showed Muppets holding hands and the message, “On our street, we accept all, we love all, and we respect all. Happy #PrideMonth!”

While many commenters expressed gratitude over the 31-year-old kid’s showing support for queer viewers, others correctly pointed out that the show has never featured any distinctly LGBTQ scenarios for queer kids and families to see themselves onscreen.

Related: Republican wants to cut funding from “Sesame Street” because a gay man will appear on it

The dissatisfaction makes sense. After all, Sesame Street disingenuously proclaimed that Bert and Ernie weren’t a couple and, as muppets, “do not have a sexual orientation” after a New Yorker magazine cover showed the muppet roommates cuddling while watching the U.S. Supreme Court knock down the so-called Defense of Marriage Act in 2013.

Sesame Street repeated the same line in 2018 when our sister site Queerty reported that one of the show’s key writers always saw the roommates as a gay couple.

But while Sesame Street ignored the fact that their star couple, Kermit and Miss Piggy, do in fact have sexual orientations, dissatisfaction over the show’s exclusion of overtly LGBTQ characters ignores the gradual steps it has taken in that very direction.

On our street, we accept all, we love all, and we respect all. Happy #PrideMonth!

In 2002, Takalani Sesame, the South African version of Sesame Street, introduced Kami, the show’s first-ever HIV-positive muppet. Kami is five-years-old, seroconverted by blood transfusion and mostly talks about HIV and the importance of staying in school.

While her creators quickly caved to Republican fears and promised that she’d never appear in the U.S. where HIV disproportionately affects non-white, gay and bi men and trans people, her mere existence at least hinted at the show’s desire to get into potentially touchy territory.

Nevertheless, Sesame Street has stood up to other queerphobes of late by featuring very out celebrities in their show including lesbian talk show host Ellen DeGeneres, comedian Billy Eichner, Pose actor and singer Billy Porter, and most recently gay rapper Lil’ Nas X.

So the critics are correct: None of the celebrities have explicitly mentioned LGBTQ identities or families during their appearances.

But considering that out queer celebrities were nonexistent on Sesame Street for many years beforehand, the show’s Pride Month message suggests that that Sesame Street could be getting a lot more colorful and LGBTQ-friendly in the years to come.