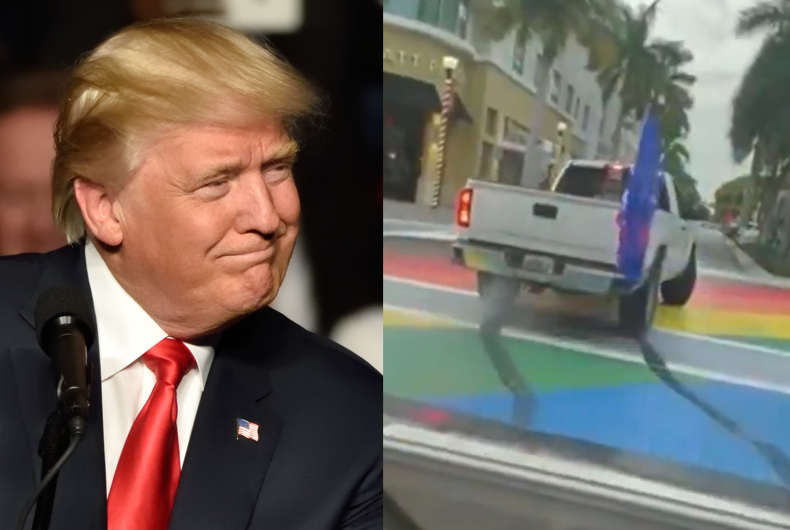 A Florida man has been arrested for doing “burnouts” on a Pride flag crosswalk as part of a celebration of Donald Trump’s birthday.

Alexander Jerich turned himself in to police in Delray Beach in southern Florida yesterday and faces charges of criminal mischief over $1,000, reckless driving, and a hate crime felony enhancement for the damage he allegedly did to the city’s new Pride crosswalk after he was caught on video.

The crosswalks cost $16,000 to install and were unveiled this past Saturday, June 12. But two days later – on Trump’s birthday – Jerich allegedly vandalized them by doing burnouts with his pickup truck.

With a “All aboard the Trump Train” flag on his truck, witnesses say they saw him damage the new crosswalks and turned over cell phone footage to police during a “birthday rally” for the former reality television host.

Video shows what looks like intentional vandalism as other cars honk their horns.

“On Monday, Jerich was seen by witnesses, doing what appeared to be an intentional ‘burnout’ with his vehicle over the LGBTQ pride crosswalk at the intersection of NE 1st Street and NE 2nd Avenue,” the Delray Beach Police Department said in a statement. “This caused the vehicle to create significant damage to the streetscape painting. Another witness provided smartphone video of the crime.”

Jerich turned himself in and gave a statement to police that said that he planned his route during the rally to pass over the rainbow crosswalk.

“I was glad to hear Delray Beach Police was taking this seriously and that an arrest was made this quickly,” Claudia Harrison of the local LGBTQ organization Compass told the Sun-Sentinel.

….which was passed by the Trumpist @FLGOPMajority in response to BLM protests.