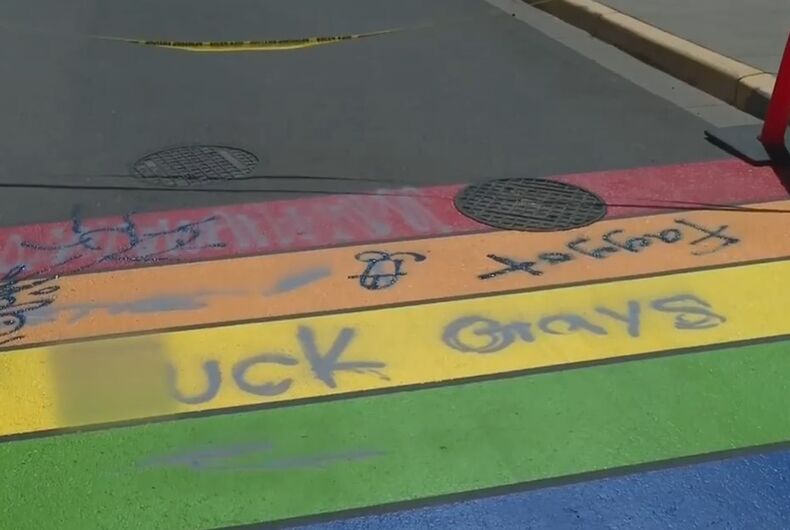 The rainbow crosswalk at Colwood High School was vandalizedPhoto: Screenshot/CHEK

Two men have been arrested in connection to hateful graffiti spray-painted on a high school’s brand new rainbow crosswalk.

Witnesses said that around 18 to 20 people were at a gathering in the school’s parking lot late on Saturday night, and several people were seen vandalizing school property.

The next day, students at Royal Bay Secondary School in Colwood, British Columbia found that hateful words like “faggot” and “fuck gays” had been graffitied on their rainbow flag crosswalk, as well as drawings of genitalia and other words.

The rainbow crosswalk was painted by the LGBTQ student organization three days earlier.

Police were soon able to apprehend two of the men they believe are responsible for the hate speech. The Royal Canadian Mounted Police said that an area resident went to confront the alleged vandals, and they fled. But officers were nearby and they stopped a car with three people in it and arrested two adult men.

“This targeted attack on a symbol of welcome and acceptance is reprehensible,” said Constable Meighan Massey. The issue isn’t just property destruction; the RCMP referred to what happened as “hate crime slurs,” which could be illegal under Canadian hate propaganda law.

“Behavior inciting hate and intolerance will not be condoned in our communities.”

Students and families gathered on Sunday to repaint the crosswalk and their work was done by Monday.

“It really resonates with me about how important and how symbolically important a rainbow crosswalk is because clearly there’s still fear and there’s still hate in our community and this reinforces how we need to continue to grow,” Colwood Mayor Rob Martin said.

The crosswalk emulated the Daniel Quasar flag design that includes an arrow made up of brown, black, and transgender flag color stripes.