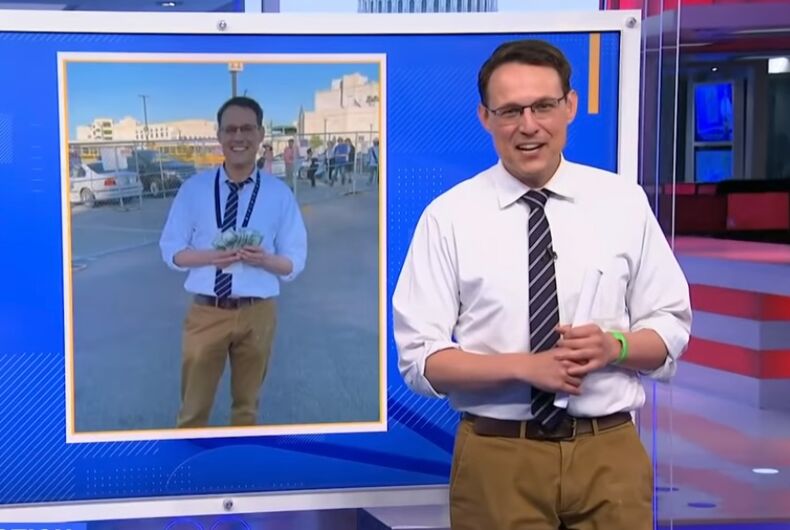 MSNBC correspondent Steve Kornacki became a household name during the week-long coverage of the 2020 elections. Now, the network’s parent company is ensuring that he’ll be on the roster by the time the next presidential ballot is being counted.

NBCUniversal announced that they came to an agreement with the out khaki-wearing personality to keep him employed through 2025, paying him in the “multi-million dollar” range.

The new deal firmly puts Kornacki on the NBCUniversal team for each election night from now until the 2024 presidential election. The company also will dramatically increase Kornacki to coverage duties outside of political events.

He will return to the conglomerate’s NBC Sports division for their coverage of the NFL this fall, a venture that started this past season after his popularity exploded in November. NBCUniversal specifically announced he will be on the roster for coverage of the next Super Bowl, which broadcasts on NBC in February 2022.

Kornacki will also assist in coverage of the Olympics, starting with the Summer Olympics in Tokyo slated for this summer. He’ll continue taking part in coverage of horse races, like he did for the Kentucky Derby last month, where he correctly predicted the horse that would win.

If that isn’t enough Kornacki for his new base of fans, he will also “develop, produce and host a game show” to come to the NBCUniversal’s entertainment division, possibly setting to air on NBC or its streaming home, Peacock.

The deal doesn’t tie Kornacki into hosting any shows on MSNBC anytime soon, as “executives agreed to a plan that would take greater advantage of his data analysis skills and pop culture appeal powered by his nerd chic style,” the Los Angeles Times reported.

“His interests really vary — so we’re fortunate to have a wider NBCU portfolio that’s equally dynamic,” the company’s news chairperson Cesar Conde said in the company’s statement. “Steve brings so much passion and genuine enthusiasm to his work, on top of his encyclopedic knowledge base, that it’s just impossible as a viewer not to share his interest and excitement.”

“Steve’s passion for trivia and analytics is the perfect foray into entertainment and we can’t wait to welcome him to our platforms,” Susan Kovner, chairperson of entertainment content, added.

Kornacki officially was a NBC News political correspondent for over seven years, but he became much more than that during the 2020 election coverage, Kornacki was virtually on-screen around the clock, constantly updating MSNBC’s big board as election results after election results slowly poured in during one of the largest voting turnouts in American history.

Kornacki became America’s unfettered sweetheart overnight, trending regularly on Twitter during the coverage with #TrackingKornacki, with khaki pants sales exploding at the GAP, and MSNBC eventually giving him his own “Kornacki Cam” so viewers could watch him when nothing else was happening.

In an interview with the Times, Kornacki still expressed disbelief over his overnight popularity.

“I’m flattered… but I do find it inexplicable,” he told the newspaper.

He also commented on his placement on last year’s “Sexiest Man of the Year” list for People magazine. He expressed that his inclusion led to “endless grief from everybody I know.”

“Obviously, there was some voter fraud on that one,” he quipped.

While Kornacki’s profile undoubtedly exploded in 2020, he is far from new from television and politics. He also became popular following coverage of the 2018 election.

Prior to working the big board, Kornacki co-hosted the short lived The Cycle and the weekend anchor for the morning show Up on MSNBC. Prior to that, he was known for his writing featured in the New York Times, Boston Globe, Wall Street Journal, and as an editor at Salon magazine. He came out in his column featured in Salon in 2011.

The @SteveKornacki has signed "a new multimillion-dollar four-year contract that will employ him across NBC Sports and its entertainment division in addition to NBC News, where he will be a mainstay for MSNBC’s political coverage,” per @SteveBattaglio : https://t.co/HyGUapMZSW

JUST ANNOUNCED: @SteveKornacki to bring his signature 'Big Board' skills and famous khakis to even more of @NBCUniversal