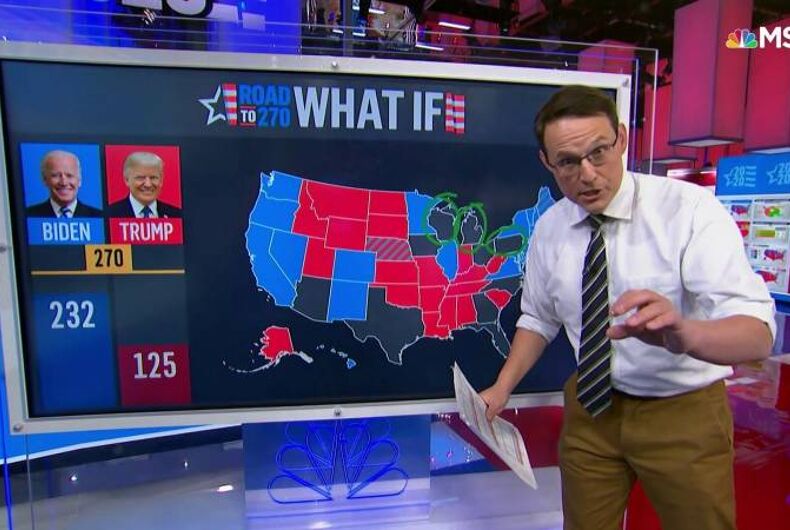 While out gay MSNBC political journalist Steve Kornacki made an impression on election night viewers with his energetic number crunching, his trademark khaki pants were a hit as well. So much so that after New York Magazine reported he got them from the Gap, people started buying them from the apparel store like crazy.

On Wednesday, a Gap spokesperson told TODAY that it saw a “dramatic increase in online traffic and within a day, we saw around 90 percent unit sale increase online.”

The publication later discovered that he wears the store’s Modern Khaki style in a “palomino brown” color and a seemingly straight fit, though the color is reportedly available in both slim and straight fit too.

“I’ve got a bunch of them,” Kornacki said of his khakis on-air Wednesday.

MSNBC viewers were so engaged by Kornacki’s adorkable Election Night coverage that the hashtag #TrackingKornacki began trending on Twitter as he recapped the night’s returns. Other social media users dubbed him “Korsnacki”, “Map Daddy”, and “Chart-throb” while MSNBC, realizing his appeal, gave him his own “Kornacki Cam” so viewers could watch him when nothing else was happening.

Kornacki also recently revealed that his Election Night energy was fueled by adrenaline and Diet Coke, and that between Tuesday night’s coverage and Friday’s continued counting of votes, he only got about five hours of sleep, often nodding off at his desk.

“I got home on Saturday and I slept for 15 and a half hours,” he admitted on air this week.

But while he and his khakis held up through the long haul, his tie wasn’t so lucky.

Against all odds, the staples held through the election, but now I think the time has come to finally retire my tie pic.twitter.com/MvjSzjfR5f