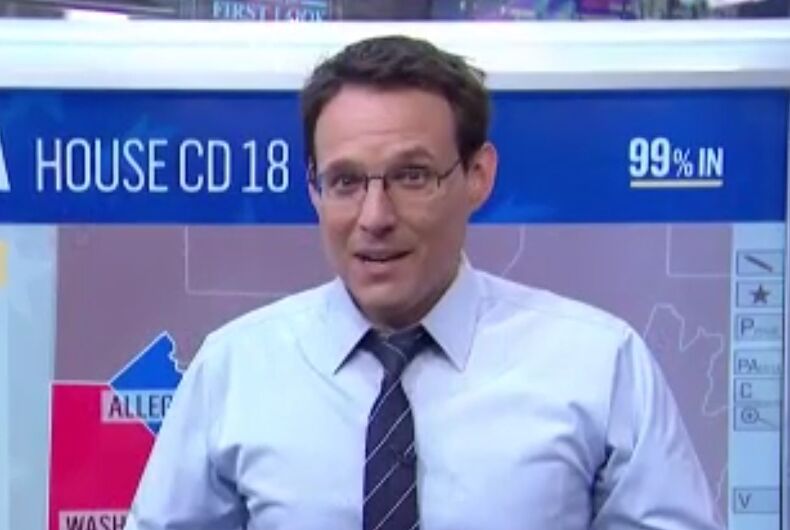 Yesterday’s special election in Pennsylvania’s 18th congressional district ended in victory for the Democrat, but Twitter was mystified by MSNBC’s energetic election coverage.

The seat was vacated when the staunchly anti-choice Rep. Tim Murphy (R) resigned last year after reports emerged that he pressured a lover to have an abortion.

The district, made up of Pittsburgh’s southern suburbs, is 96% white and Donald Trump won it by 20 points in 2016. It was supposed to be a safe Republican district, but pro-choice Democratic candidate Conor Lamb was neck-and-neck with Republican Rick Saccone in the polls and won by several hundred votes.

The election could be a harbinger of this fall’s congressional elections.

Out journalist Steve Kornacki followed the election as precincts reported results, and his energy added to the drama of the night. Twitter loved it.

By the way if you’re not watching MSNBC, you’re missing the insane ball of energy that is Steve Kornacki, papers and pens in mouth, breathlessly reporting the numbers as they come in. Pure geek awesomeness! #PA18 #stevekornacki (image via @ChrisWadsworth3) pic.twitter.com/UumZDn79pL

Off-camera, Steve Kornacki is pedaling a stationary bike that powers the entire studio.

Steve Kornacki is doing math like he has one minute of oxygen left on Apollo 13. #PA18

At 4 am, hours after Lamb had claimed victory, Kornacki tweeted forgiveness for viewers who went to sleep and expressed his love for those who were still awake.

Obviously, I forgive any and all who’ve gone off to sleep. But those that are somehow hanging in there with me, I love you.

At 5 am, he was back on the air and announced that NBC called the election for Lamb.

I’ll never forget the ones who stayed awake with me. Will be on for the start of Morning Joe, them going to sleep and then have hand surgery. https://t.co/6J9S81gzYL

Steve Kornacki wears shades to protect the sun from his eyes.