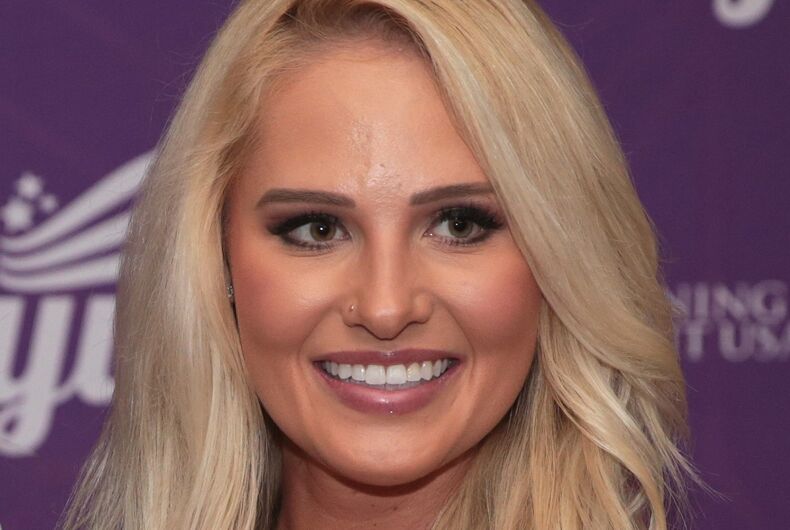 Fox News host Tomi Lahren became the laughingstock of Twitter after she said that she was the victim of two anti-conservative attacks, including one where a woman allegedly threw eggs at her and another where a “man with a cigarette in hand” called her “Nazi Barbie.”

“Nazi Barbie” is trending this morning on Twitter as the story went viral, with people debating whether “Nazi Barbie” obviously refers to Lahren or whether there are just too many Fox News hosts that it could apply to for the term to be definitively one person.

“I had a girl from the sixth floor of an apartment complex try to throw eggs at me,” Lahren said on Fox News Radio on Monday. “Of course, being a liberal, she’s not super athletic. So she missed me. But yes, she tried to throw eggs at me.”

She did not explain how she knew the alleged assailant’s political views.

Lahren then said that “a grown man with a cigarette in hand and a mask on his face” called her “Nazi Barbie” and said that she dances “on the graves of Native Americans,” possibly a reference to her famously saying in the past that her “ancestors did discover America” to explain why she feels justified in mocking immigrants.

“They’re doing what Maxine Waters said and they’re getting more confrontational because they believe they have this free pass, and I’m concerned it’s only going to get worse for all of us,” Lahren said about the incidents.

The words “Nazi Barbie” trended on Twitter and people debated whether it’s obvious that that refers to Lahren, or if there are just so many people who fit that description that it’s hard to tell.

OMG….I saw “Nazi Barbie” trending on Twitter. Without reading anything, I knew this was about Tomi Lahren. Go play in traffic, you asshole.

Tomi Lahren has spent yeras insulting everyone even an inch to the left of her & now she's getting what she put out.

Perhaps she could have avoided that by not being Nazi Barbie! pic.twitter.com/FFh7FQWTfw

You know that the GOP is in trouble when you see "Nazi Barbie" trending and you immediately think "Gee, I wonder whom they are talking about." pic.twitter.com/SG9GxpFyvQ

When I see Nazi Barbie trending and am not sure which of several Fox personalities it's about pic.twitter.com/lL58H7OjQa

If Tomi Lahren is Nazi Barbie, does that make Tucker Carlson KKKen?

Fox Propagandist Tomi Lahren is angry that people are calling her Nazi Barbie.

I agree, the Barbie part should be left out entirely.

Tomi Lahren is upset that she can’t go out in public without people calling her a Nazi Barbie.

Hey, Tomi, have you considered not being a Nazi Barbie?

Lahren has a long history of inflammatory statements, including calling Black Lives Matter “the new KKK.”

In 2018, she said that the “highlight” of her Thanksgiving was watching Border Patrol agents fire tear gas at immigrants – including children – trying to enter the U.S.

Lahren has also attacked LGBTQ equality repeatedly, including when she once got mad at Barack Obama for supporting marriage equality.

“If you’re gonna throw things at me at least don’t suck at it,” Lahren taunted after the egg story went viral.

If you’re gonna throw things at me at least don’t suck at it 🤷🏼‍♀️https://t.co/vedkf6Rerk

She didn’t provide any evidence that the egg incident actually occurred, but she has been attacked in public before. In 2018, someone at a restaurant in Minneapolis threw water at her and called her a “racist.”