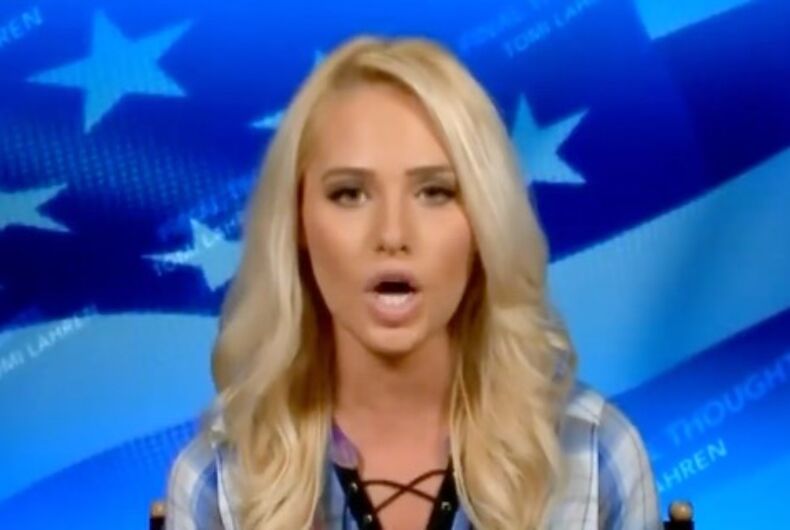 Lahren was leaving the rooftop UNION Restaurant in Minneapolis, when a person threw a glass of water at her. The incident was caught on video.

So this is disgusting, disrespectful and abusive behaviour. @TomiLahren was out today & had a drink thrown over her by another female. Is this what the ‘tolerant & loving left’ have been reduced to? #tomilahren pic.twitter.com/cIin6tc9Bs

She confronted the water-thrower, only to get called “racist,” as well as some misogynist slurs.

Twitter reacted immediately. Perhaps the Tweet everyone has been talking about the most is from Donald Trump, who boo-hooed for Lahren, who has said that Black Lives Matter is the “new KKK.”

Everybody is with Tomi Lahren, a truly outstanding and respected young woman! @foxandfriends

Flint has been without water for 4 years

Immigrant families are being torn apart

Children are being slaughtered at school

Colin Kaepernick kneels during the anthem and Trump calls him a son of a bitch.

Tomi Lahren gets water sprinkled on her and Trump calls her a truly outstanding and respected young woman.

This Tomi Lahren story is bullshit.

There should have been a good guy with a glass of water there to stop it. Why was she so defenseless? Was she expecting it? How many doors were there?

Tomi Lahren gets a shoutout for having water thrown at her.

James Shaw Jr. wrestles an AR-15 away from a mass shooter, saving countless lives, and is ignored.

What could be the difference here?

While Lahren’s history of hateful comments is well-known, someone also brought up a less-known fact about her.